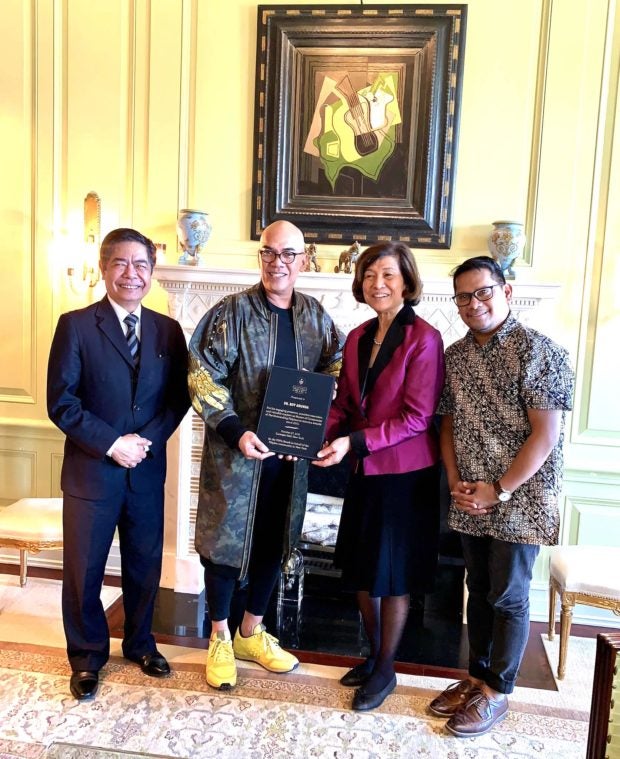 NEW YORK CITY—It was a full house at Carnegie Hall for The Outstanding Filipinos in America’s (TOFA) 8thannual awards night, where classic met contemporary in a memorable showcase of talent.

Cecile Licad, TOFA’s Heritage awardee for 2018, inspired a whole new generation with a rendition of Chopin’s “Minute Waltz.” It was an impromptu performance, her way of thanking TOFA for the recognition. One could hear a pin drop afterwards, the audience awestruck before breaking out in gleeful applause.

Seen and heard for the first time at Carnegie Hall, Jollibee the mascot and the Jollibee jingle evoked nostalgia for days spent in the Philippines. A presenter for the 8thTOFA Awards, Jollibee also opened its first store in Manhattan on October 27. Fil-Ams lined up outside in the rain for that store opening. 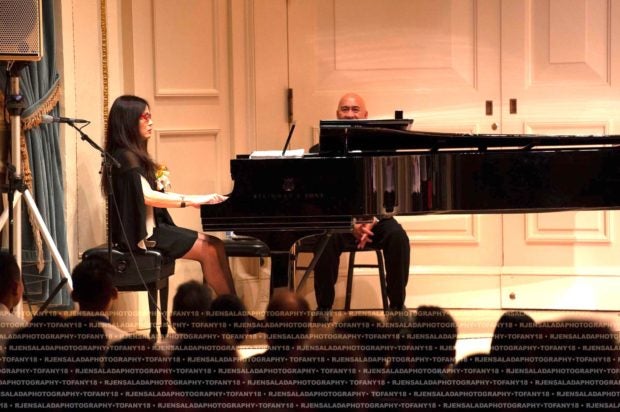 Despite the downpour on TOFA night, Fil-Ams once again paid tribute to their heritage by celebrating Filipino American History Month at Carnegie’s Weill Hall, decked out in finery. TOFA founder and executive producer Elton Lugay wore a Maranaw-inspired outfit designed by Boogie Musni Rivera. Y2 Collection suits designed by Amable Yalong, himself a past TOFA awardee, were likewise prominent onstage.

Dr. Boy Abunda, who returned to New York for the fourth year in a row to host the 8thTOFA Awards, highlighted the awardees’ accomplishments and what made each of them extraordinary. Arts and Culture honoree Joji Juele Jalandoni, Corazon Tamargo Rivera for Business and Entrepreneurship and Vivian Talambiras Cruz for Community Service were the first to receive their awards.

Citing Albert Pine’s famous quote about the value of serving others, Cruz said: “My wish is that whatever kindness I could extend, others pay it forward so it remains immortal.” The Nobel Peace Prize laureate dedicated her TOFA Community Service award to her “loving family and all the unsung heroes who silently dedicate their lives to service above self.” 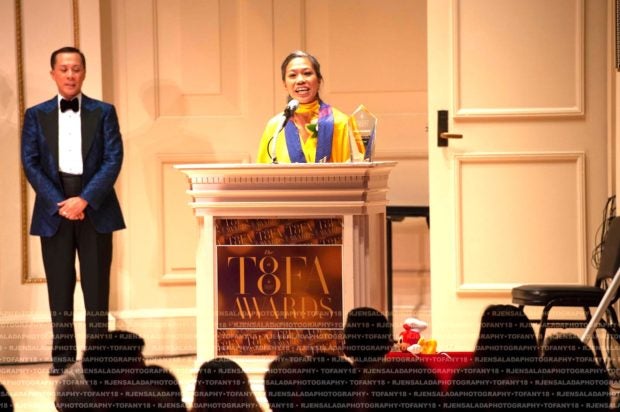 Paying tribute to the TOFA awardees, Jose Miñana Jr., Jollibee Foods Corporation group president for North America, shared the Filipino fastfood chain’s “journey through the road of perseverance” over the past 20 years since opening its first store in Daly City, Calif. At first, there was elation with sudden success, followed by shattered dreams as the Filipino chain struggled through “being a marginal business and just being average” in America, he revealed.

But success is sweet for the well-loved Filipino brand with New Yorkers turning up at its Manhattan store well ahead of opening, forming a beeline starting at 12 noon the day before. The new outlet in Manhattan is Jollibee’s 223rdstore outside the Philippines and its 37thstore in the United States. It was preceded by successful launches this year in Toronto, Milan and London. 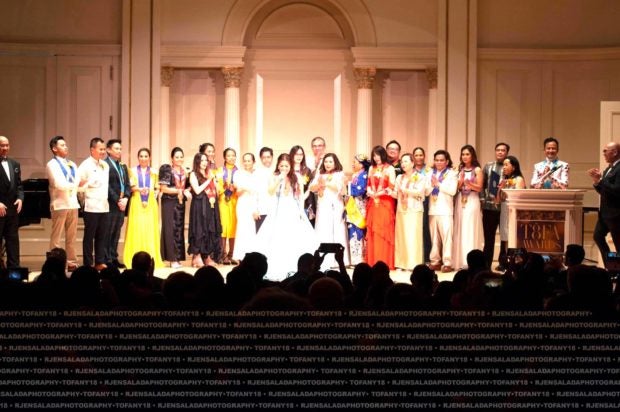 “I share our journey for I am sure you see a very similar path. In all, our biggest learning was to be true to ourselves, to believe in who we are—our craft, our chickenjoy, our Jollibee way. Yes, if we do it consistently well, we have a place in this world to shine as we all deserve to in our lifetime. For our success in Jollibee is not ours, but a success of every Filipino everywhere,” Miñana said in his speech.

Perseverance was a big theme at the 8thTOFA Awards. Recalling humble beginnings, Monsanto paid tribute to his parents’ strength of character, hard work, perseverance and pride. For Galleros, it was her mother’s sheer determination and hard work that inspired her courage. Caraquel, an immigration lawyer who spent part of his childhood as a market vendor in Davao City, shared how his early life struggles shaped his passion for public service.

Nicolas, a three-time Emmy Award winning producer, spoke of manifesting dreams.  “When I was seven years old, I would watch TV after school and analyze each show. Little did I know I was manifesting something great. I dreamed of having my name listed at the end of the TV show, winning Daytime Emmy Awards, and being at Carnegie Hall. Here I am now by the grace of God. This award is for my Mom watching me from heaven and for every human being who has a dream. Take risks, believe in the impossible, spread your wings, and F.L.Y. – First Love Yourself,” he said in his acceptance speech.

The host and producer of lifestyle show “So Jannelle”, a FilAm media pioneer, spoke of her commitment to share the contrasting stories of Filipinos in America. “People say, work for a cause, not for applause. I say, work for a cause, but if applause comes, acknowledge it. And be grateful. Sharing the Filipino-American stories of struggles and triumphs is my cause. I tell these stories in a compelling way to inspire and encourage viewers. This is how I serve my fellow Filipinos,” Perkins said upon accepting the TOFA Media and Publishing award.

Filipino journalists Ruben and Janet Nepales of the Hollywood Foreign Press Association, themselves past TOFA awardees, traveled to N.Y. and attended TOFA night as a show of support to Perkins.

Bessie Badilla, a 2011 TOFA awardee for Arts and Culture, was likewise in the audience.

Excited to gather the FilAm community together for a night of camaraderie, Lugay launched the TOFA Awards in 2010 along with co-founder Cristina Pastor, founding editor of The FilAm and host of Makilala TV.

“Clearly, the TOFA spirit is catching on and every year brings fruition to the goal for these awards, which is to applaud the heroes among us, as Vice President Leni Robredo so eloquently noted in her message this year. I think we can all agree that our TOFA awardees are heroes among us. They inspire many to strive for excellence. They are living, breathing proof of our rich heritage as Filipinos. They link the present to the past and to the future at the same time,” Lugay said in his welcome remarks. He also shared excerpts of Philippine President Rodrigo Roa Duterte’s message to TOFA awardees and the FilAm community in New York, which read: “As we celebrate the Filipino-American History Month, may you always remember your heritage and embody the Filipino values that have led you to where you are today. Let this honor inspire you [to] contribute to nation-building even as you remain agents of positive change in your adoptive land.”

A special treat for this year’s TOFA awardees was a certificate of commendation from N.Y. State Comptroller Thomas P. DiNapoli, a first in TOFA history.

Loida Nicolas Lewis, chairperson of U.S. Pinoys for Good Governance and a staunch supporter of TOFA since Day 1, commended Lugay on the success of the 8thTOFA Awards and anticipated its 10thyear.

“I support TOFA and its creator Elton Lugay, who carries it on its 10thyear, despite ‘slings and arrows of outrageous fortune’. We should honor Filipino Americans who make their own mark in the competitive world of arts, music, literature, mass media, public and political service. Mabuhay TOFA! Mabuhay Elton,” she said.

Hosting a luncheon on October 28 to honor Boy Abunda, Lewis conferred TOFA’s special citation for his all-out support to the FilAm community in New York. Asia’s King of Talk has served as TOFA Awards master of ceremonies since 2015.