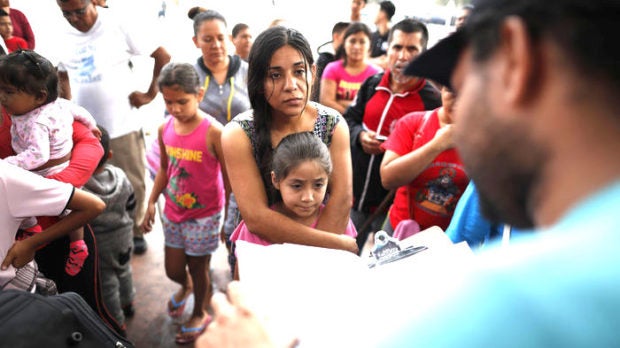 A woman from the Mexican state of Michoacán who did not give her name stands with her daughter at the San Ysidro Port of Entry in Tijuana, Mexico, as names are read off a list of people who will cross into the United States to begin the process of applying for asylum. AP PHOTO

WASHINGTON — The Trump administration revealed today a new interim final regulation that restricts access to asylum at the border, causing chaos and uncertainty for many seeking protection.

The rule, which takes effect upon publication in the Federal Register, creates new bars to asylum in the United States.

The rule would prevent certain individuals who are fleeing persecution and enter the country between ports of entry on the southern border from seeking asylum in the U.S. The restrictions could also trigger a massive expansion of detention for all individuals seeking protection, including children.

Beth Werlin, executive director of the American Immigration Council denounced the new asylum restrictions. “The Trump administration is using the caravan to advance its anti-immigration agenda. This is the latest in a series of specific attacks on asylum seekers, including families. With these actions, the administration is  closing the doors on those in need of protection. This is contrary to American values.”

Werlin added that U.S. officials illegally and routinely turn away asylum seekers at ports of entry. “We have been forced to sue over this illegal practice. These regulations will only worsen the situation.”

Werlin said that in its rush to obstruct asylum seekers, the Trump administration is attempting an end run around the law. “Congress has spoken clearly. Individuals are not required to ask for asylum at a port of entry. Any person in the United States must have access to the asylum process.”

See AIC research on asylum and refugee policy and a current  lawsuit challenging Customs and Border Protection’s practice of turning away asylum seekers at ports of entry: AmericanImmigrationCouncil.org.