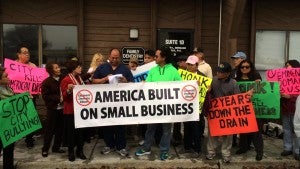 Supporters of Dr. Allan Bergano demonstrating against the city government of Virginia Beach for unfairly treating the dentist in an eminent domain case. YOUTUBE

Judge Henry Morgan ruled that the city of Virginia Beach violated Bergano’s Constitutional right to equal protection under the law and his right to due process when it unfairly rejected his claim for relocation benefits.

Bergano was told in 2014 that a city road-widening project would necessitate that he move his decades-old dental practice. Reluctantly, he began the process. But when he went back to Virginia Beach officials to apply for what other relocated dentists were getting (some more than $500,000), the city changed its mind.

“They said, I was no longer considered ‘displaced,’’ Bergano told me. “And then they said I couldn’t appeal their decision.”

“They were going to give the Filipino nothing,” Bergano said.

That’s all he needed to stand up to the city and sue.

Last week, before Judge Morgan read the verdict, Bergano said the judge talked about how Virginia Beach officials should be embarrassed for the way it treated Bergano, an exemplary citizen and a Filipino community leader.

And then when the judge rendered the verdict, it became clear: Bergano had fought the power, and won.

In the future, this Filipino’s story will help define who is displaced and entitled to relocation benefits when a government tries to pull a fast one.

At that point, Bergano said he started crying.

“It was like redemption for our ancestors,” he said, referring to the Filipinos like his dad and mine, who came to America in the 20s and faced horrible discrimination on the West Coast. “I just couldn’t believe (the judge) was actually saying those things,” he said.

Like me, Bergano is the son of an immigrant who came to the United States during that time and suffered the indignities of voicelessness.

Bergano recalled how his father fought hard to get a college education in America, but despite his education found himself taking houseboy jobs in the Seattle area. 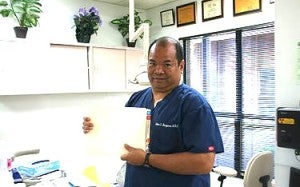 That lesson of humility was not lost on Bergano, who also paid for ten years of college and dental school education working as an Alaskero, what they called the migrant Filipinos who labored in the canneries of Wards Cove.

The money helped Bergano become the first Filipino American to graduate from the University of Washington School of Dentistry.

But living among the Alaskeros instilled in him a sense of the values common to the early Filipinos to America. We shared our resources. We stood up for one another.

“There was no way I was not going to fight,” Bergano told me about his lawsuit. “This was really not about me. This is about all the people who came before me.”

Bergano admitted the legal journey was not easy. Along the way, his condo burned down, leaving him “homeless.”

When he began the moving process, he had to borrow money from his in-laws.

But whenever it became tough, there was the history. Oh, he admitted to going to church twice the Sunday before the trial. “I was on my knees and prayed,” Bergano said.

But it was the history that gave him his game face.

“Because of my strong sense of history and pride of being Filipino American, there was no way I was going down without a fight,” he said. “It’s never about me. It’s always about us.”

Bergano is now seeking damages that could go far beyond the $500,000 in relocation costs. There’s also his time and considerable legal fees.

But he says what he wants the most is a written apology.

If he gets that, he knows what his Filipino American heroes of previous generations would say.

“If I can get a written apology, they would crack up,” Bergano said. “They’d say ‘Right on,’ there you go!”

It’s also a visual example for the next generation, that Filipinos can standup.