GLENDALE, California – It was a night of nostalgia, solemnity and exhilaration, created by the stirring performances of the Filipino American Symphony Orchestra (FASO) and its special guests at the Alex Theater in Glendale on Saturday, Nov. 3.

Marking its10th anniversary, FASO enthralled its audience with an eclectic repertoire, including excerpts from popular operas and musicals, Original Pilipino Music (OPM) and a well-applauded medley of patriotic songs.

Leading the 60-member orchestra was conductor and musical director Robert “Bob” Shroder, described by his longtime friend and guest performer Joey Albert as “the dream weaver.”

“(Bob) started this dream for musicians who lost their dreams to work and earn a living in America,” Albert said. “All the members found their dream again through FASO.”

Recalling how Shroder started FASO – the only Filipino symphony orchestra outside the Philippines – in a small theater in Los Angeles a decade ago, Albert told the audience the orchestra “has finally found its place in the music industry and in your hearts.” 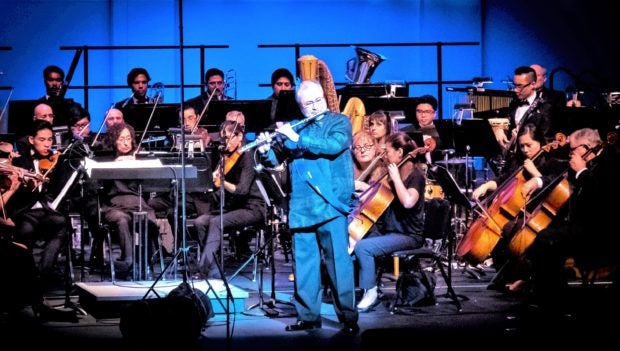 FASO was founded in 2008 to cultivate Filipino artistry and develop love and pride not only in Filipino music, but also in the Filipino identity.

The musicians who make up the orchestra come from a variety of backgrounds and professions. They include educators, health professionals, engineers and law enforcement personnel. They are all volunteers.

“We consider ourselves a community orchestra because we’re not paid a regular salary,” said founding member and violinist Andy Tecson. The musicians get honorariums. “Our payment is the joy of doing what we love and the camaraderie.”

Keeping so many volunteers engaged in the demanding task of transforming notes on a page into beautiful music takes a lot of work, Shroder said.

Shroder, who is from Kawit, Cavite, credits his grandfather Augusto R. Samaniego Sr. – his first music teacher – with instilling in him the discipline required to lead an orchestra.

Samaniego Sr. was conductor of the local Magdalo Band and a member of the world renowned Philippine Constabulary Band.

Lawyer Claire Espina, a member of the FASO Board of Directors and project chair of the 10th anniversary events, said transforming FASO from an informal group to a legal nonprofit entity was one of their biggest feats. 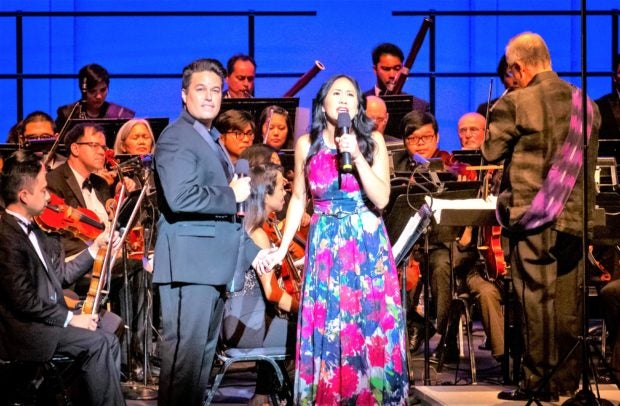 Cliffton and Deedee Magno Hall, real-life husband and wife who met as Chris and Kim in “Miss Saigon,” duet on “Sun and Moon.” RICK GAVINO

The Board, headed by Arlene Ferrolino, a music educator for more than 30 years, has kept the operations running efficiently behind the scenes – from fundraising and applying for grants to marketing and publicity.

Ruben Nepales, the first Filipino Board chair of the Hollywood Foreign Press Association, said that when he joined the FASO Board, his “fervent wish was FASO would stay on as a long-lasting Filipino American institution.”

“I hope it would be an enduring institution that many generations of Fil-Ams would enjoy,” he said.

His wife, Janet, a longtime supporter of FASO, said the group has come a long way in the past decade and praised its education and outreach programs for children and for discovering new Fil-Am talents.

Another supporter, Clarissa Lomotan Mullins, said she regularly attends FASO concerts not only to enjoy beautiful music, but also to “support emerging musicians and promote community and harmony through music.”

“When you think that these are all volunteers – from the musicians to the Board members – wow, it’s truly commendable,” said Mullins, former treasurer of Pepperdine University and director of Treasury Services for the City of Los Angeles. “It makes me so proud to be Filipino.”

Consul General Adelio Angelito S. Cruz said he couldn’t say enough about how important the orchestra is to the Fil-Am community and in promoting Filipino music and culture.

The audience was enchanted by Fil-Am Broadway performers Deedee Magno Hall and Cliffton Hall, who performed Sun and Moon from Miss Saigon. It was their first time to sing the duet again after more than two decades since they met in the popular musical and became a couple in real life.

Deedee, who played Kim in several productions of the Claude-Michel Schonberg and Alain Boublil hit musical said their FASO concert performance was nostalgic for her and Cliffton and that working with FASO musicians was “an amazing blessing.”

Seven-year-old Malea Emma Tjandrawidjadja wowed the audience with her high-energy performance of Tomorrow from the musical Annie. 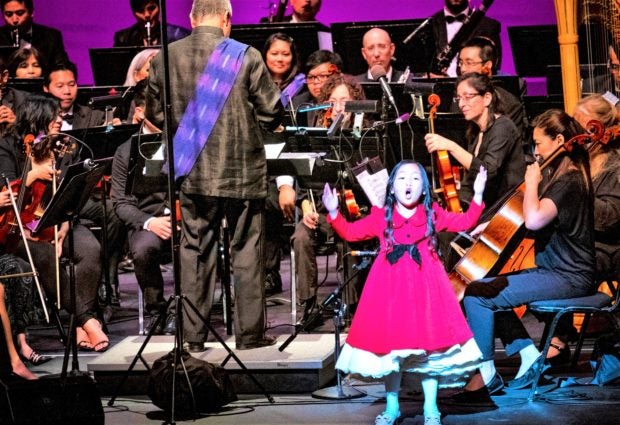 Malea has become famous since she belted a thunderously applauded “The Star Spangled Banner” in an L.A. Galaxy-Seattle Sounders game. The video of her performance has since gone viral and she has appeared on ABC’s Good Morning America and had a surprise duet with musical theater legend Jennifer Holliday.

FASO honored the late Dr. Lucresia R. Kasilag, the grand dame of Philippine Music, in celebration of her 100thbirthday, with the performance of “Festival,” one of Kasilag’s works.

The orchestra also honored Dr. Ramon Geluz, the composer of the first original Filipino musical opera in the U.S., Karim at Jasmin. Pete Avendano, Joan Cano and Kit Navarro sang a medley of songs from the opera.

Rousing the audience in a patriotic spirit was FASO’s performance of a medley of patriotic Filipino and American songs – including Bayan Ko, composed during the Philippines’ struggle for independence against Spain and the United States, and Handog ng Pilipino sa Mundo, the theme of the People Power revolution against the Marcos dictatorship.

FASO also paid tribute to the late Melvin Corpin, a composer who contributed several arrangements to the orchestra.

The WIN Orchestra, of which Melvin’s four sons are members, joined thisnumber.

The FASO Children’s Ensemble and Alumni performed So Long, Farewell from The Sound of Music and Bridge Over Troubled Water. Christina Blay, a featured performer from the FASO workshops, rendered a solo piece, Isang Lahi.

Joey Albert spread some holiday cheer with her performance of We Need a Little Christmas and took the audience on a trip down memory lane with the hit OPM from the ’80s, Tell Me.

The show was presented by Espina Lawyers, APLC and Silver Saddle Ranch & Club.

FASO is scheduled to perform for the first time in the world-famous Walt Disney Concert Hall on August 9, 2019.