Vote to flip the USA!

Vote to flip the USA!

It’s getting desperate in Trumpville.

With pre-election polls suggesting that Democrats will achieve the goal of “flipping” the House (winning back at least 23 districts), Trump has gone balls-to-the-wall on race to motivate his loyal band of white nationalists. The base is in places like Florida, West Virginia, Missouri, all red states where the anti-immigrant, racist message should echo loud and clear.

Which means that not only will the base be excited, but those more independent, those less Trumpy, may be forced to come to terms with reality.

The man they voted for in 2016 to shake things up, is off the rails.

Trump’s the man who told the Christian Broadcasting Network (CBN) this week, “You know the word racist is used about every Republican that’s winning. Anytime a Republican is leading they take out the ‘r’ word, the racist word. And I’m not anti-immigrant.”

Juxtapose that with Trumps other oft-quoted remark this week to (ABC News) about telling the truth: “When I can, I tell the truth. I mean sometimes, it turns out where something happens, it’s different or there’s change. But I always like to be truthful.”

And when he’s not, I guess we’re left with Trump’s white lies. This is from the leader of the free world.

World to Mr. Trump:  Time to move on. You are the self-serving capitalistic businessman you’ve been all your life. In 2016 you bamboozled people who were so upset with government, all of it, that they were willing to vote you in to see you shake things up.

But now after two years, I think people are shocked to see that your style of government isn’t “We the people.” More like “Me? The people?” You leave most of us in the dark and cater to your one percent.

That’s what we get with a president who does run things like a business, and cares only about his own  “shareholders,” a Republican base that’s white, angry. Pro-gun. Pro-border wall. Anti-diversity. Virulently anti-immigrant. Nationalistic to the point of racism.

What about everyone else? You mean non-Republicans? People of Color? Women? Not a major shareholder in the Trump democracy.

By focusing on his folk alone, Trump can be as vicious and nasty and uncaring as he’d like in the final days of the midterm campaign.

He riles them all up with xenophobic fear, gets them emotionally charged to vote, and doesn’t care about any residual racism that might get left over after the campaign.

He even gets to ignore all those great economic figures that came out today because that only lulls and  doesn’t motivate voters.  Good news doesn’t get people to the polls like bad news and fear.

Turns out the anti-immigrant strategy is in the American tradition of racist politics. 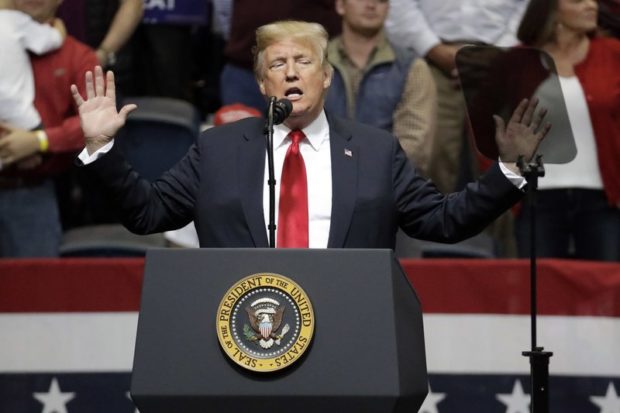 President Donald Trump firing up his conservative base in a Nov. 4 rally. AP PHOTO

On the U.S. southern border, a newspaper editorial wrote about “an ignorant, filthy, leprous horde.”

And in California, another newspaper spoke of a group that was “half-human, half-devil, rat-eating, rag wearing, law-ignoring, Christian-civilization-hating, (drug) smoking, labor degrading, entrail-sucking Celestials.” They’re all sentiments toward Chinese laborers, written in the late 1800s.

You see, America’s has had a long history of hot, racist, anti-immigrant rhetoric used in a shameful grab for white voters.

It brought both votes and bigoted policies like the Chinese Exclusion Act of 1882. In fact, politicians loved playing up to the anti-Chinese sentiment so much that in California, March 4, 1882 was set up as a legal holiday for anti-Chinese demonstrations.

And after the Chinese, other Asian American groups have been sent through the race gauntlet.

Japanese were commonly called by the single syllable racist abbreviation for years from the first phase of immigration in the 1880s to the 1940s.

In the 1930s, politicians in California feared 30,000 Filipino males arriving as American nationals would take jobs and women, and condemned them all as “lusty rabbits.”

So, consider today’s racist rhetoric a throwback to a not-so-great American tradition of racist politics. Your empathy is quite natural for the new “invading hordes,” mostly innocent brown mothers and children from Central America.

It only seems far worse because the vitriol comes not from some regional enclave of hate, but from the White House itself, and out of the mouth of the president of the United States.

But people are about to do something about it in the coming mid-term elections. In California, the most Asian American state in the nation, close to 20 million people are now registered.

According to the Asian American Voter Survey, the excitement level of this midterm is unprecedented.

All that’s left to do is for all of you to do the most revolutionary thing you can in a democracy.

I voted earlier this week.  Then I drove 30 miles to my county registrar to make sure my ballot  didn’t get lost in the mail, or end up shredded in Moscow.

At least now I can shut out the angry, hateful rhetoric and wait for Tuesday’s results

It was getting pretty bad when Trump, without evidence, claimed that caravan of asylum seekers was filled with MS13 gang members and Middle Eastern terrorists.

But now we’ve reached a new level of ignorant hate when Trump says rocks thrown at the border will be considered a firearm and justification to shoot to kill.

Nothing like a little blood lust for his base, as Trump talked about his intent to send 15,000 troops to the southern border.

That’s more troops for Trump’s fake invasion than there are in Afghanistan.

He’s tried to soften his remarks.

And then, out of self-defense, the order is shoot to kill?

So now we have Trump in campaign mode speaking dangerously and threatening a new set of executive orders changing asylum rules, based once again on Trump’s view that people claim asylum, get into the court system for up to 3 ½ years, and then don’t show up. That sort of thing may occur, but not at a level to change what Trump called the “catch and release” laws and start tent cities on the border.

Other executive orders that Trump says could come out next week may include a proposal to end birth-right citizenship.

It’s just another anti-immigrant proposal that’s really misdirected at honest immigrants who come to the U.S. to live and work from all parts of the world.

Unfortunately, there are people, many from Trump’s favorite country, Russia, who become entrepreneurial and start birth tourism operations where you arrive pregnant and have a baby on American soil.

This generally isn’t the innocent asylum seeker, or the non-citizen living in America who takes part in this charade. There are groups gaming the system who “sell” American citizenship for profit. Maybe birthing operations designed to abuse the law can be ended by Congress.

But birthright citizenship itself is protected by the Constitution. And you’ll recall we have a Chinese American to thank for that.

I’ve written about Wong Kim Ark before. He’s the San Francisco native, born to Chinese immigrants. He was a Chinese American who worked as a cook, like my dad. He went to China for a vacation, then was told he was not a citizen when he re-entered.

The case went to the Supreme Court and is the basis of birth-right citizenship.

But conservatives continue to use birth-right citizenship as an “oldie but goodie,” at the ready in their quiver of racist tools. Along with other ideas they use as full-employment for conservative activists, like affirmative action, it’s a ready race issue sure to ignite passion.

Trump’s used birth-right citizenship before. So, when they take it out to shoot a policy arrow into the sky, you know it’s campaign time.

Let’s be clear, the president really can’t change the Constitution by executive order. A king might be able to do that, but Americans revolted against a king and we all should remember that as Trump starts acting like one.

It’s the logical place to take a stand against any thought that a Trump executive order would take away an important Constitutional right. It’s the actual site that confirmed the birthright guaranteed by the 14thAmendment.

And it’s a part of our Asian American history.

If you don’t like how history keeps trying to repeat itself, fight back the best way members of a great democracy can.

Remember, citizens get to vote.  Value that right, whether naturalized or by birth. Use it to counter the racist campaign energy generated by Trump. Vote by mail, or in person. Whatever your method do it by Nov. 6 to make sure our country gets back on track.

FANHS Museum Sunday and in San Francisco in November

I’ll be at the FANHS National Museum in Stockton doing part of my “Amok Monologues,” talking about my story slam performance at Harvard, the affirmative action suit, my vacation among the hoodoos, the elections, AND a workshop on how to tell your story. You will leave with a blueprint of your story

Emil Guillermo is a Plaridel winning journalist and commentator. He writes a column for the North American bureau of the Inquirer.net. Listen to him on Apple podcasts. Twitter @emilamok