SAN FRANCISCO — San Francisco’s Union Square monument is a reminder of the troubled history shared by the Philippines and the United States. Except that the 85-foot tower has told that story solely from the American point of view.

But that could soon change.

A group of Filipino Americans have successfully convinced the city of San Francisco to fix the monument’s major flaw. And amid heated battles over what to do with Confederate memorials, they have also demonstrated a more creative way to fix other defective memorials.

The fix to the Union Square monument will not tell the complete story about the Filipino American journey, but it’s at least a step in the right direction.

The monument, which was unveiled President Theodore Roosevelt in May 1903, was built to commemorate Commodore George Dewey’s successful assault on the Spanish fleet in Manila Bay in May 1898.

The current inscription read: “On the night of April 30, 1898 Commodore Dewey’s squadron entered Manila Bay and, undaunted by the danger of submerged explosives, reached Manila at dawn of May 1, 1898. Attacked and destroyed the Spanish fleet of ten war ships. Reduced the forts and held the city in subjection until the arrival of troops from America.”

The monument remembers one of the first battles of the Spanish-American War. But it ignores the bigger, longer, bloodier war that followed. 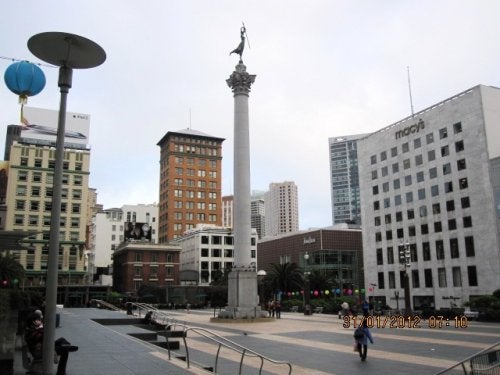 San Francisco monument honoring Commodore George Dewey’s victory over the Spanish fleet in the Battle of Manila Bay in 1898.

The Philippine American War began in February 1899 when U.S. sentries opened fire on Filipino soldiers in Santa Mesa, Manila. The US declared the war officially over in 1902, although Filipinos actually continued waging a guerrilla war against the U.S. colonial forces until 1915. More than 200,000 died in the war. Some say the death toll reached oen million.

That was the part of the story that got left out of the Union Square memorial. But a group of Filipinos led by Rudy Asercion successfully lobbied the city of San Francisco to change the inscription. The revision was approved by the San Francisco Arts Commission last week.

A new inscription will soon read in part: “The Spanish American War ended with the Treaty of Paris in December, 1898. However, the United States’ continued military presence in the Philippines led to the conflict later known as the Philippine American War. In that dark period, 4,400 American soldiers died, together with 20,000 Filipino combatants. Civilian lives lost numbered in the hundreds of thousands. The Philippines remained a colony of the United States from 1899 to 1935, and granted commonwealth status thereafter.”

The new inscription will help introduce Americans, young and old, to the “Philippine-American War,” a dark chapter in U.S. history which for decades was pretty much forgotten or ignored. In fact, it was not even considered a war. For many years, the Philippine-American War was simply referred to as “the Filipino insurrection against the United States,”

As Steve Haller, a military historian told me when I wrote about the centennial of the start of the Philippine American War in 1999: “What’s in a name by Shakespeare is dead wrong in politics. Insurrection implies insurrection against legitimate authority. As far as the Americans were concerned, it was legitimate. As far as the Filipinos were concerned, it was a war to assert their nationalist rights against a colonial power.” 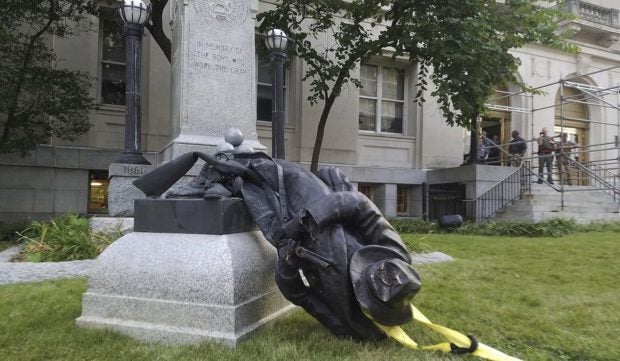 In this Aug. 14, 2017, file photo, a toppled Confederate statue lies on the ground in Durham, North Carolina. AP PHOTO

The revised inscription will still be a grossly inadequate portrayal of the war.

It does not mention the gritty, horrific details of America’s brutal conquest of the Philippines, including some of the most atrocious tactics used by the US military — water cure, now known as waterboarding, and other forms of torture.

It was also a brazenly racist campaign. In defending the invasion, one U.S. senator from Indiana declared: “We must never forget that in dealing with the Filipinos, we deal with children.”

Given the barbarity of the Philippine American War, one could imagine a more aggressive campaign against the monument, similar to efforts to remove memorials to Confederate soldiers in the US south.

But Asercion and other Filipinos who worked hard to have the inscription changed took a more creative approach. Instead of demanding that what was essentially a monument to American aggression be taken down (which would have entailed an uphill battle, of course) they sought to add to it, to offer visitors to Union Square more information and broader context for the event and the military leader the monument was commemorating.

It underscores the approach others have taken in the American South where there is now a push to remove Confederate statues that many say glorify slavery.

The battles over the Confederate statues reached a climax last year when white nationalists with tiki torches staged a demonstration in Charlottesville, Virginia. A white nationalist later drove a car into a counter-protest killing a woman and injuring 19 others.

The heated dispute  over the Confederate statues was featured recently on 60 Minutes. The segment highlighted the views of Julian Hayter, a historian at the University of Richmond who was appointed by city of Richmond to the commission that will make recommendations on what to do with five prominent Confederate monuments.

Hayter, who is African American, says they should stay.

“I’m a historian, and I think that the statues should stay with a footnote of epic proportions,” he told Anderson Cooper. “I’m suggesting we do a little bit of historical jujitsu.”

By that he meant offering more information and context to the monuments: “Historians call it recontextualization, the addition of signs or markers with information about when and why the statues were built to help people see old monuments in a new light.”

That’s what a group of Filipinos accomplished in San Francisco.

“We are doing this thing for our children so that they know that rich history of the Filipinos with regards to the Filipino American War,” Asercion told INQUIRER.net.