SF agrees to change Dewey plaque to include PH-American War

SF agrees to change Dewey plaque to include PH-American War 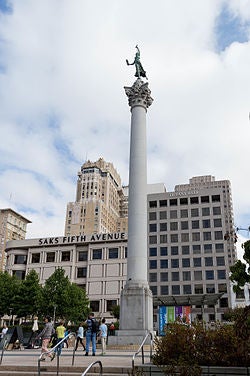 The statue in San Francisco’s Union Square honoring Dewey’s victory over the Spanish fleet in Manila Bay in 1898.

SAN FRANCISCO — After nearly half a century of persistent efforts by well-meaning Filipino Americans to correct the Union Square monument plaque honoring Commodore George Dewey’s 1898 naval victory in Manila Bay, the city finally approved the posting of a corrective text.

The revision clarifies that Filipinos had already risen up for their independence from Spain and that Filipino revolutionaries resisted the U.S. decision to seize the archipelago for itself, leading to the Philippine American War.

The original inscription seen by thousands of tourists reads:

“On the night of April 30, 1898 Commodore Dewey’s squadron entered Manila Bay and, undaunted by the danger of submerged explosives, reached Manila at dawn of May 1, 1898. Attacked and destroyed the Spanish fleet of ten war ships. Reduced the forts and held the city in subjection until the arrival of troops from America.” 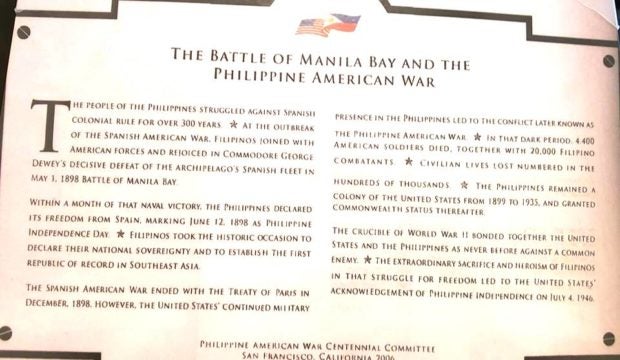 The approved revision to the Dewey plaque. INQUIRER

The correction will read:

The Battle of Manila Bay and the Philippine American War

“The people of the Philippines struggled against Spanish colonial rule for over 300 years. At the outbreak of the Spanish American War, Filipinos joined with American forces and rejoiced in Commodore George Dewey’s decisive defeat of the archipelago’s Spanish fleet in May 1, 1898 Battle of Manila Bay. 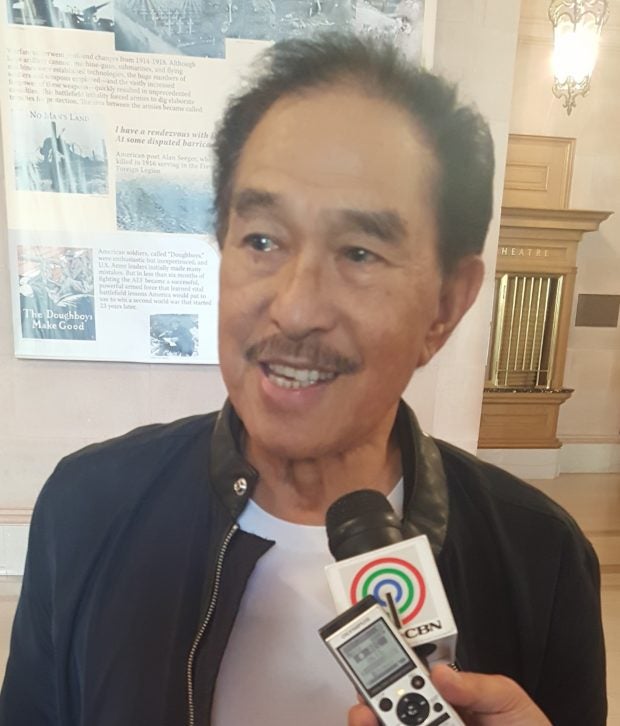 Community Leader Rudy Asercion never gave up on the proposal for the improved Dewey monument plaque to include that Filipinos also fought the Americans in the Philippine American War. INQUIRER/Jun Nucum

“Within a month of that naval victory, the Philippines declared its freedom from Spain, marking June 12, 1898 as Philippine Independence Day. Filipinos took the historic occasion to declare their national sovereignty and to establish the first republic of record in Southeast Asia.

“The Spanish American War ended with the Treaty of Paris in December, 1898. However, the United States’ continued military presence in the Philippines led to the conflict later known as the Philippine American War. In that dark period, 4,400 American soldiers died, together with 20,000 Filipino combatants. Civilian lives lost numbered in the hundreds of thousands. The Philippines remained a colony of the United States from 1899 to 1935, and granted commonwealth status thereafter.

“The crucible of World War II bonded together the United States and the Philippines as never before against a common enemy. The extraordinary sacrifice and heroism of Filipinos in that struggle for freedom led to the United States’ acknowledgement of Philippine Independence on July 4, 1946. –Philippine American War Centennial Committee, San Francisco, California 2018”

Ecstatic Filipino delegation whoop it up in this group shot after the approval by the visual arts committee of the San Francisco Arts Committee of the revision of the Dewey Monument plaque.INQUIRER/Jun Nucum

Filipino community leader Rudy Asercion, among the most persistent campaigners for the revision, was elated: “Some people celebrate Filipino American History Month, but we are part of making history today with this unanimous approval. It was a big help that the Filipino community, not just by one person or one organization but the whole community, showed and up and spoke in behalf and in favor of the plaque,” Asercion beamed. “We are doing this thing for our children so that they know that rich history of the Filipinos with regards to the Filipino American War.”

Proponents thanked San Francisco Mayor London Breed and her Filipina senior adviser and concurrent chief of staff, Marjan Philhour, who impressed on the San Francisco Arts Commission the historical importance of the proposal. 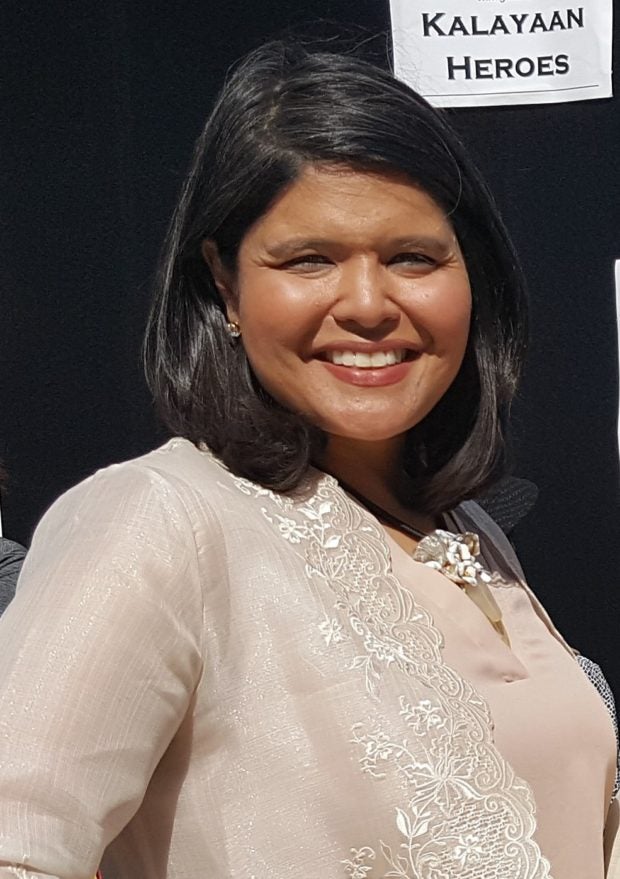 Fil-Am Marjan Philhour, senior adviser and concurrent chief of staff of San Francisco Mayor London Breed, did important legwork behind the scenes in the approval of the plaque’s revision. INQUIRER/Jun Nucum

The SFAC will next formally confirm the visual arts committee’s approval of the proposal and the historical accuracy of the text, in its November 5 meeting. Asercion will discuss with cultural affairs director Tom DeCaigny the next moves to put the inscription in place possibly on October 5, 2019 in time to celebrate Filipino American History Month.

Lawyer Rodel Rodis recalled that as early as 1977, he and Dennis Normandy went to the San Francisco Chronicle to report that the inscription in the plaque needed to be corrected.

“John King wrote a very prominent article in the op-ed section that said Filipinos speaking out for change (in) the Union Square monument was causing controversy. The reaction was very positive that people were telling us it is going to happen, but somewhere along the line, it just kept getting postponed and we got lost in the shuffle.” 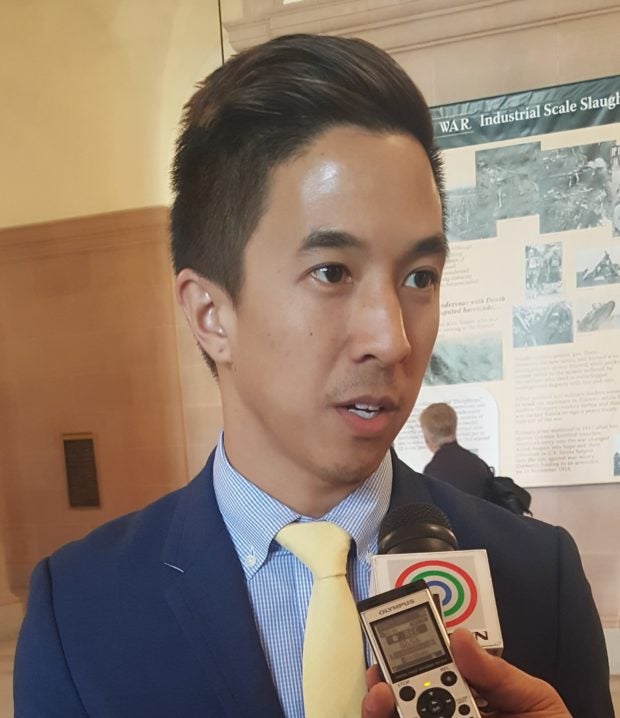 National Federation of Filipino American Association (NaFFAA) executive director Jason Tengco acknowledged that the intergenerational collaboration and that with the improved inscription, Filipino history would be better known. INQUIRER/Jun Nucum

Rodis said they kept following up and nothing happened. Then in 2005 or 2006, Rudy (Asercion) got involved and “we started drafting the text of the plaque and we went through the different channels to get it to happen, and again it failed,” Rodis recalled.

“Rudy never gave up, saying we have to keep pushing this. And then finally with his persistence, we were able to get the Arts Commission to do it after we went to the Union Square Committee, Park and Recreation Committee, the Board of Supervisors that also approved of it before finally when we went to the Arts Commission, the last hurdle, and had it had it approved today. It also helped a lot that Marjan Philhour has the ears of Mayor Breed,” Rodis added. 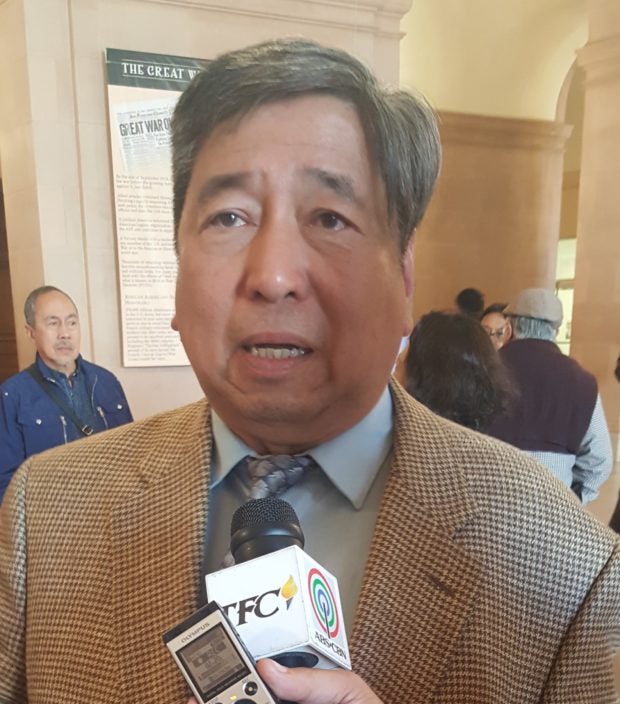 Lawyer Rodel Rodis was among the initiators of the drive to correct the Dewey plaque. INQUIRER/Jun Nucum

“It is a cautionary tale so that the U.S. doesn’t go to other countries thinking that what Dewey did would be the motto for invading other countries. They should know that there were human consequences to that invasion,” asserts Rodis, adding that Filipino Americans must understand that the Filipinos in the Philippines “believed in freedom and democracy and were willing to fight for it and they were central players not just bit players in the drama of Commodore George Dewey, the U.S. Navy and the Spanish fleet.”

Speaking for Filipino youth and the millennials, National Federation of Filipino American Association executive director Jason Tengco acknowledged that “this is obviously a great step in Filipino American History Month, the intergenerational collaboration you really paved the way for young people to really step up.”

Probably the only witness to the event who is a direct descendant of a historical Filipino figure Cristina Osmeña, great granddaughter of President Sergio Osmeña, the second president of the Philippine Commonwealth. She said it was a “wonderful gesture on the part of the SF Arts Commission to acknowledge this part of Philippine history” and to embrace the different cultural perspective and it was very heartwarming for them to do so.“A lot of students in the U.S. know that it is not referred to as the Philippine American War but as the Spanish American War that belittles the efforts of the Philippines to win their own independence” she said.