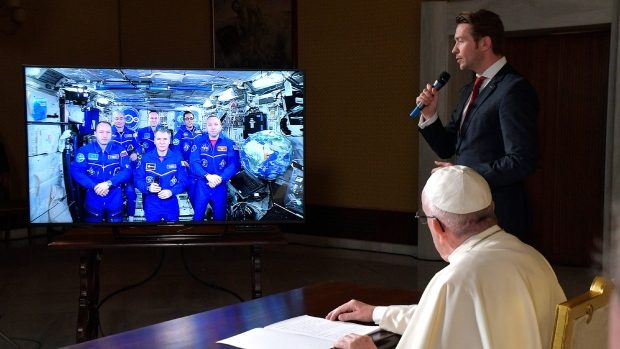 Pope Francis connects to the crew aboard the International Space Station from the Vatican, Thursday, Oct. 26, 2017. AP PHOTO

High technology is transforming the face of the earth. Like a two-edged-sword-type phenomenon previously unknown to human experience, it is originally meant for good but, it appears, the bad guys are enthusiastic to use it for evil.

After reading the signs of the times, the Church leadership did not only gamble its trust in the omnipresence and vast influence of technology, but also joined the bandwagon towards social progress. It is not a surrender to technology but a way of saying that God’s greater glory (GGG) is the ultimate goal of every human creativity.

In 1961 Saint John XXIII allowed rolling cameras into the Vatican to film a “day in the life” of His Holiness. The pontiff after him, Saint Paul VI (1963—1978), was the first to fly in an airplane, becoming the first pope to leave Europe, for no Bishop of Rome ever left Europe before Vatican Council II.

Benedict XVI took the chance when offered to talk directly to astronauts in outer space (International Space Station) and had a question and answer appearance on television in 2011.

The enhancement in car accessories, the comfort of online shopping and trading, and the beauty of listening to “Bohemian Rhapsody” by Queen while baby-sitting, not to mention the remarkable breakthroughs in genetic engineering and other fields of sciences, have all become a part of a broader and deeper revolution and evolution of the ever-creative humankind.

Do we not find God writing straight with crooked lines when the phenomenon of, say, internet connectivity has undoubtedly created a favorable opportunity for the new evangelization, such that the Word of God, the Gospel, has become so accessible as it is delivered conveniently and without interruption to the remotest segments of humanity with a finger’s touch?

On the other hand, we are also witnesses to the uncertainty of cryptocurrencies, the socio-emotional-financial-spiritual agitation caused by hacking, skimming, cybercrime, online pornography, and the rapid info overload due to instant connectivity.

God alone is the splendor of eternal goodness, unfading beauty, and everlasting love

“The Internet is God’s gift,” asserted Pope Francis. So, use it wisely for GGG first and for universal brotherhood second!

When the first cable was installed between Europe and the Americas in 1858, much thought was given to what should be the first telegram message that would be sent to the New World through the depths of the Trans-Atlantic Ocean.

At last, a sublime decision was made, that is, to send the message of the angelic hymn, Gloria in excelsis Deo in the following words: “Glory to God in the Highest, greetings from the Directors of Atlantic Telegraph Company, Great Britain, to Directors in America!”

It was the most fitting message for a human invention. When we work the hardest for excellence to achieve our earthly goals, we discover something beneficial for our wounded nature. It is also when we honor God the most.

The omnipotent, omniscient, omnibenevolent God has no need of anything or anybody outside of Himself. In an absolute sense, God does not need the whole created universe, or the best part of it, for everything else is just one of His Divine whims (Revelation 4:11).

YHWH God alone is the splendor of eternal goodness, unfading beauty, and everlasting love. To the glory of the Blessed Trinity, nothing is lacking and nothing more can be added.

Not the fame, fortune, and the glitters that the world offer, but Him alone do we worship and adore. GGG (or AMDG, Ad majorem Die gloriam Dei in Latin) is the end all and be all of who we are and what we can achieve.

All mortal men and the most brilliant minds ever born, including Albert Einstein and Stephen Hawking, come from God and will return to God. Lest we forget, we are appointed masters of all earthly resources that we might subdue them and use them for the greater glory of God (Gaudium Spes, 12).

Jose Mario Bautista Maximiano ([email protected]) is the author of The Beginning and the End (Claretian, 2017) and The Signs of the Times and the Social Doctrine of the Church (Salesiana, 1992).