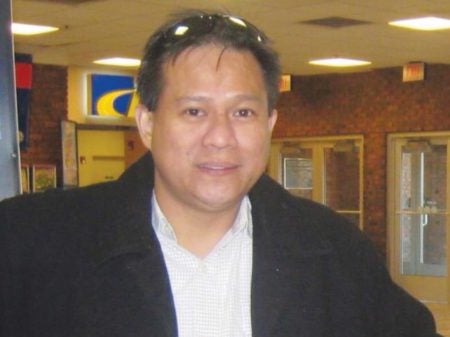 Dr. Dante Cubangbang, 50, of Franklin Square, New York, and the other doctors were indicted for one count of conspiracy to distribute controlled substances, which carries a maximum sentence of 20 years in prison.

Cubangbang, who operated a medical clinic in Queens, was arrested Thursday evening, Oct. 11 and presented in Manhattan federal court Friday, Oct. 12.  His  co-defendants in the case include John Gargan, 62, of Manhattan, a nurse practitioner who also prescribed pills, and employees Michael Kellerman, 54, of Queens, and Loren Piquant, 37, of the Bronx.

“These doctors and other health professionals should have been the first line of defense against opioid abuse, but as alleged in today’s charges, instead of caring for their patients, they were drug dealers in white coats,” said U.S. Attorney Geoffrey S. Berman said.

According to the allegations in the indictment unsealed on Thursday, Cubangbang, a physician, and Gargan, a nurse practitioner, prescribed over 6 million oxycodone pills to individuals they knew did not need the medication for any legitimate medical reason.

Their clinic allegedly took in $5.7 million in cash over 3 1⁄2 years and was the largest New York prescriber of oxycodone pills tracked by Medicaid and Medicare.

They prescribed more than twice as many oxycodone pills that were paid for by Medicare and Medicaid than the next highest prescriber in New York and doled out these prescriptions during office visits that lasted no more than a few minutes and involved little to no physical examination.

Together with Kellerman and Piquant, who worked in the clinic and recruited patients, the defendants collected more than $5 million in all-cash office visit fees, which they laundered and divided amongst themselves.

The Wall Street Journal, citing the city’s health department reported that New York City is in the midst of what law enforcements have described as an opioid epidemic and that every six hours, someone in New York City dies of a drug overdose.

While the rate at which people are dying from drugs slowed in 2017, the number of fatal drug overdoses rose for the seventh straight year to 1,487, up 62 from a year before, according to the city’s health department. The rise has been driven by opioids, particularly the powerful, synthetic opioid, fentanyl, according to city officials.

Prosecutors disclosed on Wednesday that a confidential informant visited the clinic of Dr. Cubangbang multiple times. A video bug was also installed in his office.

“The confidential informant was not asked any questions about pain, but nonetheless received a large prescription for 30-milligram oxycodone pills,” prosecutor Michael Krouse told U.S. District Judge Paul Gardephe as reported by Newsday.

“They hid behind their medical licenses to sell addictive, dangerous narcotics.  This Office will do everything in its power to bring to justice anyone responsible for fueling the opioid epidemic that has taken so many lives,” Berman said.

Cubangbang is out on a $1 million dollar bail after pleading not guilty at a brief hearing Thursday.