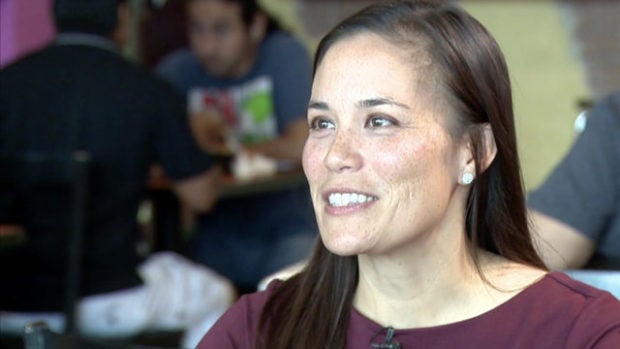 NEW YORK—If she wins against the Republican incumbent Will Hurd in Texas’ 23rdcongressional district, Gina Ortiz-Jones will be the first congressperson of Philippine descent.  In addition, she will not only be the first woman but also the first Iraq War veteran, and the first openly gay woman of color to represent that district.

Her mother Victorina Ortiz embodies the American Dream. Hailing from the northern Luzon province of Pangasinan and a graduate of the state-run University of the Philippines at Diliman (the flagship campus of the state university), she came over and found work initially as a domestic helper. Now a high school teacher, she raised Gina and a younger daughter on her own.

Ortiz-Jones has quite an impressive resume. Upon graduating from high school, on an ROTC scholarship, she earned a college degree and went on to join the US Air Force as an intelligence officer. After three years in the service, including deployment to Iraq during the George W. Bush administration, attaining the rank of captain, in 2006 she returned to Texas, working in private industry and caring for her mother, who had cancer but eventually recovered.

She then was employed as an intelligence analyst by the U.S. Africa Command in Germany and in 2008, by the Defense Intelligence Agency, specializing in Latin American topics, where she moved up to become a special adviser to the deputy director. By November 2016, she was working for the Executive Office of the President (Barack Obama), under the U.S. Trade Representative.

Ortiz Jones continued in this capacity under the Trump administration but resigned in June 2017. She told the HuffPost, “The type of people that were brought in to be public servants were interested in neither the public nor the service…That, to me, was a sign that I’m going to have to serve in a different way.”She returned to San Antonio to run for Congress,living in the house where she grew up.

Ortiz-Jones is part of a blue wave of young progressive women, all Democrats, who aim to upend the Trumpian status quo, following in the lead of Alexandra Ocasio-Cortez, the Latina who defeated the veteran Queens legislator Joseph Crowley in the primary and is heavily favored  to win against the Republican candidate in a predominantly Democratic district.

At a fundraiser held recently at a posh Fifth Avenue apartment, Ms. Ortiz-Jones sat down for a brief interview with a few journalists, all from the New York Philippine community. Here are some of her answers to questions asked.

She prefaced her replies by pointing out that the district she hopes to represent is huge, 530 square miles—the distance from Manhattan to Raleigh, North Carolina—with two time zones. Forty percent of the border with Mexico is in this district.

According to her, the biggest issue confronting the district’s mostly Hispanic constituency is health care. “Texas is the most uninsured state in the country.” The state could have expanded Medicaid coverage under the Affordable Care Act, but refused to do so. Nationwide, those left out total 2.2 million, including 600,000 Texans.

As for a single-payer plan? “We have to move incrementally. The number 1 incentive is the health care of our people. It cannot be profit.”

On immigration, she opposes the construction of the border wall, decrying the estimated $25 billion cost as a waste. “The wall will not solve the problem that they think it would solve.” She enumerates the different largely Hispanic communities with ties on both sides of the border. She describes “these ties are sources of strength, not something to be divided.”

She does not however favor the abolition of ICE (Immigration and Customs Enforcement). Its publicized problems  are a result, she believes, of lack of effective oversight. She has visited detention centers in El Paso, where women who crossed the border without proper papers are being held.

“This district is on the frontlines of this debate literally and figuratively. We need to have a policy that reflects our values,” by which she clearly means a more humane approach that recognizes the humanity of those seeking a better life. On the campaign trail, she talks of her own story and of her mother’s—the quintessential immigrant saga.

With another hot-button issue, that of gun control, she favors universal background checks and a ban on the sale of assault rifles. She cites her own training in the air force, in intelligence, in Iraq, as necessary in the handling of military-grade weaponry such as the assault rifle. She has seen the damage that an assault rifle is capable of wreaking. She admires the Parkland, Florida, high schoolers, survivors of a horrific mass shooting last February that resulted in 17 murders, for standing up and “demanding that adults listen to them.”

Gina Ortiz-Jones represents a saner, healthier, and inclusive perspective that runs counter to the narrow, bigoted, and racist narrative that this Republican administration pushes, and whose chief executive fawns over morally reprehensible leaders such as Russia’s Putin, the Philippines’ Duterte, and Saudi Arabia’s Mohammed bin Salman. It’d be a big plus to see her in the hallways of Congress and speak truth to power.