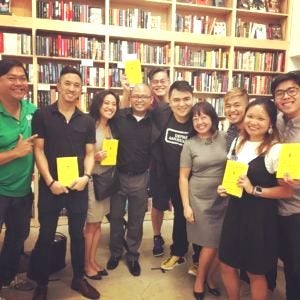 Vargas on Sept. 21 discussed his book with Jonathan Capehart, a member of The Washington Post editorial board.

Among the dozens of Filipino American supporters who attended and bought his book was Ben de Guzman, director of diversity affairs at DC Mayor Bowser’s office.

“He’s shared so much of his journey with the public in an effort to make change, often at great cost,” de Guzman noted in a Facebook post. “He writes particularly eloquently about the very personal impact that writing has on him- as he ‘documents’ himself through the written word and the very challenging process of book writing in the first place.” In promotional materials, Vargas describes his book as not about immigration. “This book is about homelessness, not in a traditional sense, but in the unsettled, unmoored psychological state that undocumented immigrants like myself find ourselves in. This book is about lying and being forced to lie to get by; about passing as an American and as a contributing citizen; about families, keeping them together, and having to make new ones when you can’t. This book is about constantly hiding from the government and, in the process, hiding from ourselves. This book is about what it means to not have a home. After 25 years of living illegally in a country that does not consider me one of its own, this book is the closest thing I have to freedom.”

An American by choice, Vargas came to the U.S. from the Philippines when he was 12. He’s lived here for 25 years, but his status as undocumented has meant that he’s spent those years feeling unmoored and anxious. He knows no other home but this one, yet can’t feel fully at home in a place where he has to lie to get by. In this eloquent and passionate memoir, Vargas speaks out about the reality of living as an “illegal” immigrant in the U.S. today.

Vargas makes the incontrovertible case that people should not be defined by their legal status, but by who they are.

This riveting, courageous memoir ought to be mandatory reading for every American. The pressing question that emerges from these pages isn’t whether Jose deserves to be a citizen but whether we, as a nation, deserve the bravery and generosity of spirit that he offers us with an open heart and mind.

This is a book for our times. Read it, feel it at a gut level, and go beyond the noise of hate politics. Jose Antonio Vargas’ personal story is a firsthand view of what it’s like to be a child raised with anxiety as the norm. This is a book about America. I cried reading this book, realizing more fully what my parents endured.

– Amy Tan, New York Times bestselling author of “The Joy Luck Club” and “Where the Past Begins”

Jose Antonio Vargas’s eloquent and emotional book bears witness to a basic truth: we should not be defined by our legal status, but by who we are. His voice is an important voice that needs to be heard by all Americans, whether they are Americans by birth or by choice.