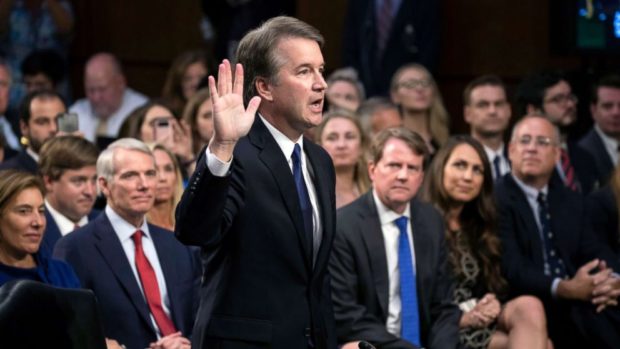 I am banging my authentic Philippine gong slowly to herald the change America is about to endure.

In a stealthy way, Brett Kavanaugh was sworn in on Saturday, leaving Monday for just show business, and the bum-rush complete for the Supreme Court’s new hire on Tuesday.

Even before the sex and beer issues that cloud the confirmation of Brett Kavanaugh to the U.S. Supreme Court, there were the issues beyond Roe v. Wade that were important to Asian Americans and gave many of us reason to doubt the nominee.

On racial justice issues, which Filipino Americans in the broader Asian American context should be concerned about, Kavanaugh showed just how white he was.

In one of the earlier hearing sessions, Sen. Cory Booker (D-NJ) grilled Kavanaugh about his public writings and emails and asked tough questions about affirmative action and voting rights.

Kavanaugh has demonstrated a firm belief in the late conservative justice Antonin Scalia’s “one race” notion, where racial justice is criticized as “racial entitlements.”

Where would Kavanaugh stand defending a person of color’s right?

Kavanaugh dodged and evaded the question, meaning Kavanaugh is no friend of the Filipino—no matter how much free San Miguel you give him.

Brace yourselves. On this very important issue of race, we’re about to get a new justice who will redefine our nation’s equity compass.

But first, let’s talk about the damage Kavanaugh’s done to our nation in just these last few weeks just trying to get the job.

After the Senate confirmation vote on Brett Kavanaugh, there can be no joy in Mudville, that place where modern politics finds itself today.

No common ground. No consensus. Just a lot of slimy muck hurled about. And now it’s infected the Supreme Court.

So, I bang my authentic Philippine gong, which once belonged to Thelma Buchholdt, the first Filipino American to serve in the Alaska state legislature. I know Thelma would be thankful for Republican Sen. Lisa Murkowski, who voted “no” on Kavanaugh.

It would be a more joyful rhythm and less of a dirge had only Sen. Susan Collins (R-Maine) and Sen. Joe Manchin (D-WV) exhibited less self-interest and showed more courage to vote with Murkowski and unite the country.

What about Arizona’s Sen. Jeff Flake? Forget about Flake. Even as a lame duck senator with nothing to lose, Flake showed no courage after leading the charge for a one-week delay. But his heroism is limited, just like that FBI investigation he helped call for.  Turns out in this drama, he’s just a cameo, not a political warrior in camo. Unfortunately, Flake has lived up to his name.

It was up to Collins and Manchin to make history. Instead, they were too weak for posterity as they publicly announced their “yes” votes last Friday.

Both believed in Dr. Christine Blasey Ford to a point. But they also believed in a white conservative male even more.

Collins didn’t doubt that something happened to Blasey Ford. But Collins hid behind that thin FBI investigation, which didn’t follow all leads, let alone interview the principals, Blasey Ford or Kavanaugh. The FBI wasn’t interested in the truth.

As Sen. Mazie Hirono called it, the investigation was just a sham.

The investigation did provide cover for Collins and Manchin. But the illogic of their “yes” votes is most infuriating. 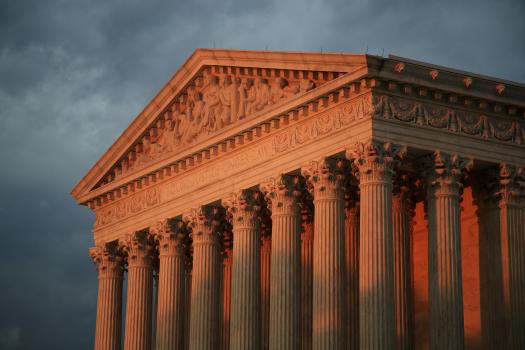 The US Supreme Court. AP PHOTO

Collins decried that there was no “corroboration.” But, of course, there was. Blasey Ford talked to her husband and therapists way before the Kavanaugh hearings. But they weren’t included in an FBI investigation that was as thorough as Trump’s dye job. They missed a few spots.

Of course, even the GOP acknowledged the Kavanaugh hearings were just a job interview. In a job interview, you can do anything you want, which is basically what the Republicans set out to do from the very beginning.

They simply saw their role as practicing what I call “ideological nepotism”–to get one of their own onto the high court.

When Dr. Blasey Ford came into the picture, the GOP parried claims of insensitivity by muttering about criminal standards and “innocent until proven guilty.”  They hid behind jurisprudence, when all they were doing is playing politics.

It’s just plain dishonest. And confusing.  Like calling Prop. 209, the ballot measure that got rid of affirmative action in California in 1995, the Civil Rights Initiative. Civil Rights?

This is what democracy has become. You confuse the public with false arguments. Then claim the whole thing is a circus to give the appearance of some high-mindedness (even Collins called the process “dysfunctional” like a “gutter-level” political campaign). Ultimately, Collins embraced the nasty process as her vote rams through Kavanaugh, the guy she always wanted in the first place.

Democrat Manchin was no less frustrating. He too believed Blasey Ford went through “something,” but he wondered if her assailant was really Kavanaugh.

And with that, we can all be 100 percent certain it was politics that violated Blasey Ford and delivered Kavanaugh.

Republicans should have had the decency to realize Kavanaugh was flawed and pick another conservative as a consensus candidate.

But democracy these days is about tearing apart, not building consensus. A 50-48 vote is the closest SCOTUS vote since Clarence Thomas.

And now the court has its own harassers’ caucus.

Since Trump’s election, I’ve worried about a constitutional crisis. I thought that would happen at the end of Mueller’s Russia investigation.

Turns out, the entire Trump administration is an evolving constitutional crisis. The court now will have an undisputed outspoken, partisan member.

For most of the confirmation the hearings, Kavanaugh was unable to say anything about his opinions on settled law.

Meanwhile, he was passionate about beer, his elitist background, and his innocence when asked about Blasey Ford’s allegations.

He was partisan, inflammatory, and offensive, and all under oath. It was enough for retired Justice John Paul Stevensto declare Kavanaugh not fit for the high court.

I just wish Kavanaugh were as passionate about racial justice and fighting for us as he was fighting for himself.

But I guess Kavanaugh is the judge for the new minority—the America that holds sacred everything that is white and male.

Said Sen. Mitch McConnell after the vote: “We’re not intimidated by the mob.” Well, the GOP wasn’t interested in the people.

Spoken like Kavanaugh’s chief benefactor and beneficiary. Kavanaugh’s writings indicate he’ll be a justice who would not limit executive power and would likely be favorable to a King Trump.

Trump may have been worried earlier in the week after The New York Times exposed how he helped his father in schemes to evade taxes. But with Kavanaugh solidifying a conservative court, there’s a real fear that Trump will feel confident that he is “above the law.”

That’s a far bigger threat to democracy than the overturning of Roe v. Wade or denying racial justice.

A conservative Asian American lawyer I’m acquainted with told me just before the vote, “Emil, it’s time to move on.”

Sure, I can do that.

But there’s little doubt in my mind that our democracy has been diminished by this episode, with the court, once above the fray, now more firmly in partisan mode than ever before.

Through all the mud, we will have a new court that is officially and unmistakably rightward tilting, more extreme, yet no less supreme.

Yes, we can move on. The midterms are in November. Register. Vote.

That’s how a democracy undoes its undoing.