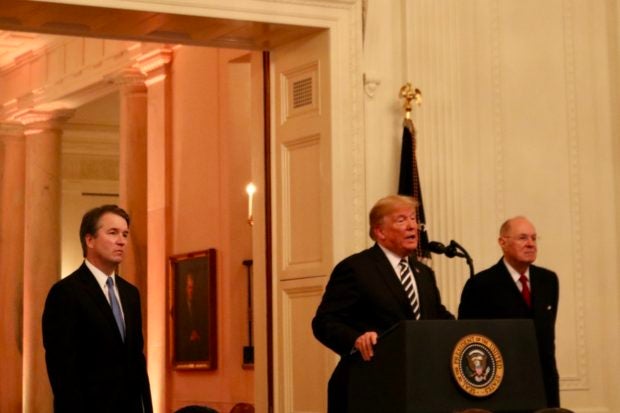 At the White House during Kavanaugh’s ceremonial swearing-in as SCOTUS justice, Pres. Trump (in his speech) apologizes to Kavanaugh and his family “on behalf of the nation” for the “campaign of political and personal destruction” he endured during his confirmation process. INQUIRER/Georgio Dano

WASHINGTON, D.C.— Judge Brett Kavanaugh on Monday was sworn in as the 114th Supreme Court Justice of the United States. He was nominated by President Donald Trump in July this year to take the seat of retiring Justice Anthony Kennedy.

On October 6, by a vote of 50-48 and despite serious allegations, the U.S. Senate confirmed Judge Kavanaugh’s appointment to the High Court.

Kavanaugh’s nomination was met with the biggest controversy in SCOTUS nomination history. He was accused of sexual misconduct dating back to his high school and college years.

In his speech, Trump apologized to Kavanaugh and his family “on behalf of the nation” for the “campaign of political and personal destruction” he endured during his confirmation process.

The White House claims that throughout Kavanaugh’s “exemplary” career, he has let the Constitution guide his decisions.

“Tonight, with the disgraceful partisan politics of the past three months behind us, America is getting a Justice who understands that the role of a judge is to faithfully interpret the law as written—not to legislate from the bench.”