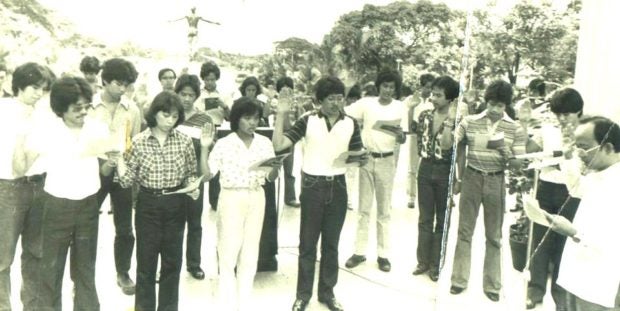 The late Jesse Gimenez (center) with his right hand raised, taking his oath as the new vice chair of the UP Student Council.

Jessie Gimenez passed away as the AFP was unleashing an absurd, troubling campaign against campus activism.

Not too many Filipinos have heard of Jessie, who died suddenly of a heart attack. But he played a role in Philippine history that young Filipinos should know about especially now that the AFP under Duterte is once again to turning to dangerous red-baiting intimidation tactics they used during the regime of Ferdinand Marcos.

The photo above shows a highlight of Jessie’s activist career. That’s him in the center with his right hand raised taking his oath as the new vice chair of the UP Student Council. Standing next to him at UP Diliman’s Quezon Hall is Malou Mangahas, the new chair.

This seems like any other student council swearing-in in the ‘80s. But it’s not. That ceremony in Diliman capped a nearly eight-year battle waged by UP students to restore their student government.

On the UP campus, it took nearly a decade for students to reclaim these freedoms, including the right to hold student council selections and have a body to represent them. Many of them endured harassment and even prison. One prominent student leader, Ditto Sarmiento, who was editor of the Philippine Collegian, died after a gruelling stint in a Marcos prison.

And one institution played a central role in this campaign of repression: the AFP.

This is the context that the AFP’s top brass has ignored in their disingenuous campaign against a resurgent student movement. In the face of repression and abuse, Filipino students fight back. They did it during the Marcos years. And they’re doing it again today under yet another fascist leader.

The whole nation and the whole world understand why young Filipino are rising up: many of them are seeking to put an end to a campaign of slaughter that even Duterte himself admitted his government unleashed.

“In state universities you are given free education by the government and yet hindi ka pa nag-ga-gragraduate you are already going against the same government that gives you free education,” complained the PNP chief.

It was the same lame argument the military under Marcos tried to use to dissuade young Filipinos from getting involved in the fight to end a brutal regime. “Just keep quiet and don’t get involved. Simply ignore anything you hear about abuses. Just focus on your studies so you can have secure lives and lucrative careers that do not threaten Marcos.”

To be sure, for middle class young Filipinos who entered UP during the Marcos years, it certainly made sense to do just that. That was true with Jessie Gimenez.

As his friend and former UP student activist Jean Laguerder recalled, Jessie’s dream was to be rich, and “to earn his first millions pesos , then a significant sum, before age 30.”

But like many other young Filipinos from middle class families who entered UP in the ‘70s and ‘80s, Jessie was drawn to activism, to the fight for social change, she said. That led him to join the activist movement to restore the UP student council and other freedoms.

“My recollections of him as a student leader remain,” she said in a note. “He had a way with people. He was charming, cheerful, kind, and lighthearted – and I will continue to cherish him by these traits.”

AFP leaders also ignore or are unaware of an important reality about the student movement: it isn’t and never was a monolithic movement. Jessie represented Samasa, the left-leaning student party that dominated UP politics until it was dislodged in 1985 by another party, Tugon, led by Chito Gascon.

The rivalry between the two parties and other student organizations was intense and led to heated debates on the Diliman campus.

Today, the former Samasa and Tugon rivals, including Gascon, who is serving in government as chair of Commision for Human Rights, are on the same side, opposing, denouncing, fighting against yet another abusive regime.

LATEST
Pope Francis urges courage as global death toll from COVID-19 tops 65,000
WATCH: Dalgona coffee is the drink of quarantine 2020
Tips on how to eat healthily while stuck at home under a lockdown
WATCH: What happens when flight attendants work from home
CEGP condemns alleged ‘red-tagging’ of campus journalist
MOST READ
usa Fil-Ams braving frontlines against coronavirus
usa PH-born Filipina is state of Washington’s top adviser on COVID-19
usa Priests as COVID-19 frontliners
usa A day in the life, in the Age of COVID-19, Part 1
usa The power of lying
usa How we’re are coping with the pandemic across the globe
usa Loss of smell, taste, might signal pandemic virus infection