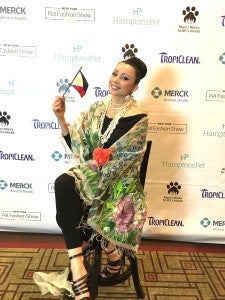 Rachel Grant models pineapple fabric hand-painted by Karl Olivero, one of the artists with autism to show case their designs in New York under Autism Hearts Foundation. INQUIRER/Carol Tanjutco

NEW YORK — Rachel Grant was born in Luzon, Philippines and raised in the famous “Robin Hood’ city of Nottingham, The British Isles. Many years after Grant bagged the coveted role as James Bond’s would-be assassin in the sequel “Die Another Day,” her entrepreneurial success continues.

Her display of prowess in the Filipino martial arts arnis, escrima and kali was enough to impress Pierce Brosnan and producers to pick her as the “Bond girl.” Although, Rachel quips, “It was never really used in the movie.”

She trained under Guro Victor Gendrano and Guro Dan Inosanto, the legendary student of Bruce Lee wo made popular the use of chako. Her fascination with martial arts and weaponry started with her role as the female master at BBC’s “Master of Combat.” She performed stunts in movies, including death-defying car chases and spins in “The Tournament,” and was a body double for Angelina Jolie in “Lara Croft: Tomb Raider.”

But even the real life “Bond girl” is no match to the globetrotting exploits by Rachel Grant and her varied philanthropic works. Her charitable giving across the globe was published in her book, Making A Difference.

Rachel captured the world with her 70-country expedition and adventures. She’s inspired by her mentor, “Miss Morrison,” whose words she lives by: “The greatness of a person is not what they can do, but what others can do because of them.”

In 2012, she was personally invited by Hillary Clinton to Washington, DC with then President Noynoy Aquino, in recognition of her achievements.

Rachel was so moved by the poverty and suffering she witnessed in various regions of the Philippines that she dedicated herself to helping disadvantaged communities. Today, she continues her Fountain of Love project, building shelters that double as schools in Bani, Pangasinan, in the aftermath of the typhoon that hit the province hard. She enjoys rural living; no wonder that our Bond girl’s favorite dish is the Ilocos delicacy dinengdeng.

It is not surprising that roving far-flung regions of the planet has fostered her appetite for unusual delicacies, such as royal rat, fried tarantula, crispy locust bars and the infamous Philippine “balut” duck embryo. Her wanderlust is a result of her ancestral heritage that stems from royalty.

Her full name is The Honorable Rachel Louise Grant de Longueuil, a barony title granted by King Louis XIV of France to Charles le Moyne de Longueuil for his travels and explorations throughout North America. The first Baron de Longueuil and his sons secured large wilderness areas for France, which were acquired by the United States in the Louisiana Purchase.

Grant’s great-grandmother, Ernestine Bowes-Lyon, was first cousin to the British Queen Mother; and as a direct descendant of the baron, Grant is cousin to the British royal family, including Princes William and Harry. Her father Michael Charles Grant de Longueuil, the son and heir of the 11th Baron de Longueuil and Ernestine Bowes-Lyon, herself a first cousin of Britain’s Queen Mother. Rachel’s mother is Isabel Padua, a Filipina of Spanish descent who currently lives in England.

When asked about her success, Rachel credits her dual cultural upbringing, and has an advise to all those born of Filipino descent: “It is such a blessing to be mixed; embrace it! Go back to the Philippines, accept it for what it is, it will enrich your life in so many unimaginable ways. And don’t stay in Manila. Go out to the provinces.” 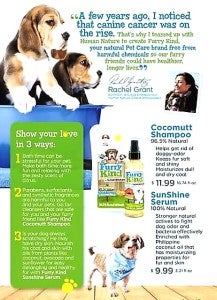 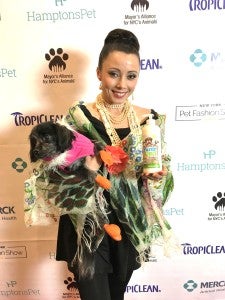 Rachel became a Global Ambassador for a Philippine social enterprise, Human Nature, which manufactures her own pet product line Furry Kind (Cocomutt Shampoo, Sunshine Serum), promotes natural ingredients from the Philippines while preventing harmful chemicals from causing canine cancer. Part of proceeds goes to her typhoon shelter project in Pangasinan. Her love for animals could not be more apparent than her recent participation to the New York Pet Fashion, an annual show produced by Gregg Oehler to save rescue animals and raise awareness. 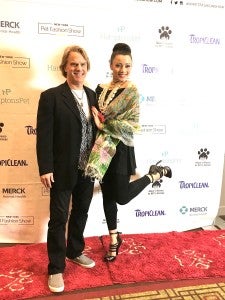 Rachel represented the Philippines during the international fashion runway participated in by more than 25 countries. She donned a stunning pineapple fabric wrap hand-painted by children with autism, part of a collection that will be presented on April 3-7 United Nations World Autism Day, in collaboration with Autism Hearts Foundation, Department of Health, United Nations and Philippine Consulate with designers Patis Tesoro and Anthony Legarda.

Interestingly, Rachel showed off her Bond girl shoes especially designed by Nere Ku, a convertible pair of shoes that turns into a different shoe with or without the strap. Other sponsors of the event gave away natural-based pet foods, safety lighted leashes, fancy pet costumes and accessories