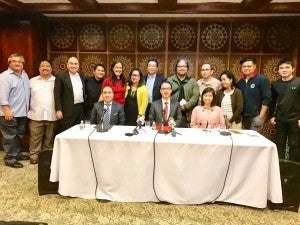 NEW YORK—Amid a hectic visit to the United States, Philippine Senator Alan Peter Cayetano made sure to attend a town hall meeting with the Filipino American community here.

Himself a Fil-Am—his mother is from Michigan–Cayetano said he was most excited to meet with Fil-Am leaders. The senator, who was President Rodrigo Duterte’s vice-presidential candidate in last year’s elections, had gone on a series of diplomatic meetings, including a meet and greet with newly confirmed U.S. State Sec. Rex Tillerson.

“I’ve been traveling with President Duterte in state visits and multilaterals, helping build bridges with our Asian neighbors—our traditional allies, and our long relationship with the U.S. is very important to the Philippines,” Cayetano said.

“Whether it’s [the] American tourist, whether it’s the American companies doing business in the Philippines, whether it’s American students who want to have some exchanges with the country, the friendship is there. There are some problems [with] government-to-government [relations] but this new administration also brings some opportunities. In a very small way, I’m here to help push that relationship forward,” he added.

Americans doing business in the Philippines are still doing well under the Duterte administration, he stressed. Also due largely to President Duterte’s strong focus on peace and order, fighting corruption and expanding infrastructure, some US$30 billion have been committed by China and Japan for infrastructure and agriculture projects, it was noted.

Since workers would be getting 15 to 20 percent more in their take-home pay as a result of the tax relief, it would also somewhat relieve companies from pressures to provide pay raises, he explained.

Violence not by default

As expected, there were many questions on extrajudicial killings (EJK) or the widely held view that the Duterte administration sanctions EJK in its war on drugs.

To this, Cayetano maintained that violence was not the primary mode of police forces and that drug-related deaths involved suspects trying to kill policemen, who would shoot back in self-defense. CCTV footage provides evidence to support this claim, he said.

“So two things that I have in mind [in] explaining to our American friends and counterparts [the war on drugs] is one, the socio economic difference here—you have a big, big middle class, whether it’s lower, upper and a lot of the rich people and there are people who are challenged economically in the Philippines. More than half are poor and about 20 percent are very, very poor that don’t even enjoy the dignity of life, eating three times a day or having medicine when they’re sick,” he said.

“So the second difference is that, here [in the U.S.], they talk about heroin, marijuana and cocaine. In the Philippines you’re talking about crystal meth. You hear of violence in the heroin and cocaine business but that’s between the gangs selling it. But you don’t hear a cocaine addict raping his two-year-old sister [or] two-year-old niece; you don’t hear of a cocaine addict shooting his father or mother because hallucination [or] paranoia is not associated with those drugs, but it is with shabu. Here, the number of pushers vis-à-vis the users are different,” he added.

He further explained that in the Philippines, many drug users also sell drugs to sustain their habit. In most cases, pushers are high on drugs when they are caught, which means they also have elevated levels of paranoia.

“That’s why I said that the cameras or CCTV would help prove the point. Our police have two choices: just turn the other way, and there would be killings anyway except that the victims will be innocent because they are the victims of violent, drug-related crimes, or go against them. And many times they’ll have to use their arms because these guys will fight back,” Cayetano said.

Meanwhile, INQUIRER.net asked the senator to comment on Duterte calling former Colombian president Cesar Gaviria an “idiot” for saying that the Philippines was repeating mistakes the Latin American country made in the drug war.

Cayetano said the former Colombian president might simply be out of touch with what’s happening in the Philippines. Cayetano said though he did not know the intention of the former president of Colombia, who might have meant well or was being political. “He might honestly just want countries to see the mistakes that they have made, but it’s not fair to our President and country to say ‘don’t make the same mistakes’ as if the situation is exactly the same and as if violence doesn’t solve anything,” he said.

“Lastly, he was saying concentrate on health. We have and that’s why we need help. In meetings I’ve had in Washington and here, [I say] instead of criticizing us, if the criticism is really meant to help, give us bullet-proof vests and other equipment for our SWAT teams and police teams… give us the cameras that you use for the SEAL teams so that you can see for yourself whether these are extrajudicial killings or these are policemen who are simply protecting their lives which is standard in any country,” he added.

Asked if he agreed with Duterte’s way of handling the war on drugs, Cayetano affirmed his support for the crusade.

“I am supportive of the drug war. I think all countries should have a drug war. The problem is that [the] drug war is being [made] synonymous to extrajudicial killings, which is not the case. The number of killings was 10-12K, 12-16K during the Aquino time but people didn’t consider this EJK because President Aquino and his people spoke differently. They didn’t make it easy for critics,” the senator replied.

He maintained that police forces were conducting more operations now than ever before, and there were efforts to hasten investigations and to curb the death toll.

“Now can we do a better job? Can we investigate faster? Can we have less killed? That goes without saying. One life saved is still a life. And that’s what everyone is trying to do, but it’s not that simple,” he said.

On the strained relationship between Duterte and Vice President Leni Robredo, Cayetano noted the recent attendance of the vice president at the Legislative-Executive Development Advisory Council (Ledac) meeting. It was the first public appearance of the two officials together since Robredo resigned from the Cabinet in December.

“There’s always been an effort for friendly relationship with the vice president, but she’s made her choice and the president has made his choice. Why was she at the Ledac? Because that’s the law. Unlike the cabinet wherein you keep all the advocates on one side because it’s the executive… but in the Ledac, you really invite even the majority and minority leader. So are the doors open? Yes; the communication line, yes. But it has to be both sides. The vice president can’t keep saying I want to help and just keep [on] criticizing. Well, Malacañang can’t also keep saying you’re welcome and not listening to the ideas. It takes two to tango,” Cayetano said.