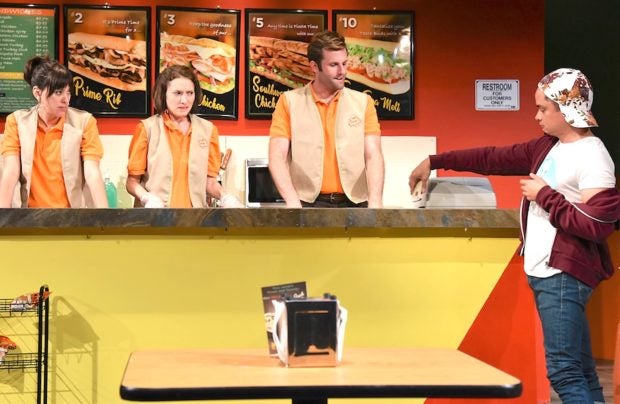 In the play, being staged by Iama Theatre Company until Oct. 21, a franchised sandwich shop is used as a microcosm of recession-era America—serving as commentary on the struggles and perseverance of the working class.

An overwhelmed immigrant franchisee and three disparate and desperate “sandwich artists” attempt to keep the store, and themselves, afloat.

No spoilers on what food item To portrays in the show. However, it’s not a spoiler to reveal that working in the food-service industry is not alien to To.

“My very first ‘official’ job ever was back in Chicago working at McDonald’s. I was 14 and had to get a special permit to work. My mom didn’t want me to, but I was insistent on making my own money.”

After overcoming hurdles at home, he then had to face challenges in the workplace. 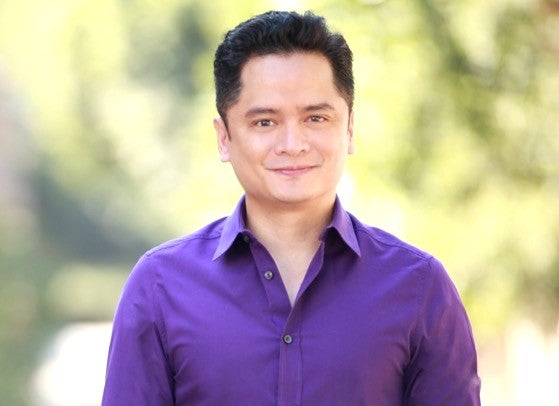 Rodney To has worked with theater groups across the country. CONTRIBUTED

“I was such a little guy that I couldn’t fit into the size 28-inch pants, so on my first day I panicked because smallest size pants they had were still too big on me.”

But he did not let costume, er, uniform issues stop him. “I took the shoelaces off my shoes, tied them together, and used that as a belt.”

The determination to get and to stay at the job came with a literal baptism of fire.

“When you worked at McDonald’s back then, you started at the grill making the larger burgers, like Quarter Pounders. I remember I was too short to reach far back on the grill to flip burgers and I burned my arm several times. I was the worst burger-maker ever.”

It is perhaps to the benefit of fast-food chain patrons, theatergoers and To himself that To shifted to acting and directing.

Now based in Los Angeles, To’s recent theater credits include “One of the Nice Ones” for Echo Theater Company and “Edith Can Shoot Things and Hit Them” (written by Fil-Am playwright A. Rey Pamatmat) for theater group Artists at Play.

His television and film credits include “Rosewood,” “Parks and Recreation,” “Modern Family,” and “New Girl,” among others. 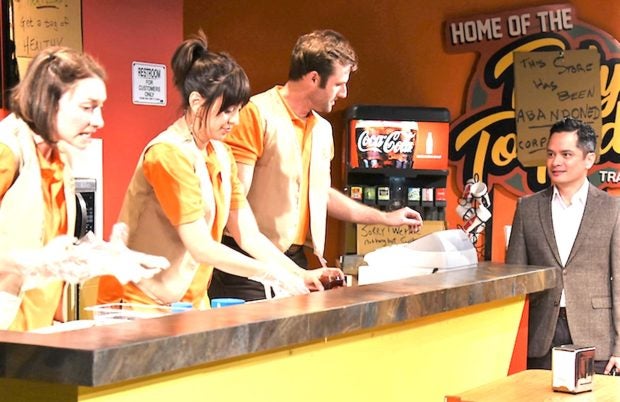 “This gem of a play—a dark, slightly absurdist tale about the plight of the American worker—has become even more powerfully relevant today than when it was written in 2014,” says Eckhouse. “It’s not only wickedly funny, but deeply moving as well. We witness these three sandwich ‘artists’ fighting for their well-being, their dignity, their souls in the face of a soul-less corporate bureaucracy. The cast is amazing, I’m thrilled to be the director of this production.”

To adds, “I hope the audience walks away having a deeper appreciation for the opportunities we have here in America. Let’s face it, we are in such precarious times right now that it’s hard to remember how wonderful our country is and always was.

“It has never, never lost its luster with me, so this whole notion of needing to make it better ‘again’ is just asinine. We have always had tremendous opportunity in this country. I hope people walk away remembering that.

“We are very, very lucky to be citizens of a country where opportunity is yours for the taking—with dreams, dedication, hard work and kindness.”

To conclude this interview, To is challenged to craft a sandwich with Filipino ingredients and condiments. His response is, “I would make a sandwich out of some flavored meat, like adobo, and wrap it in some sort of doughy bread. Basically, I’m not that original, I would just make siopao.”

A Fil-Am actor’s life: Rodney To