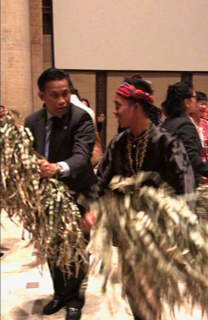 Consul General Henry Bensurto Jr. at the premiere of “Mountain Spirits: Textiles and Folk Arts of Cordillera and Ilokos,” with a member of International Dayaw. CONTRIBUTED

SAN FRANCISCO — The premiere of “Mountain Spirits: Textiles and Folk Arts of Cordillera and Ilokos,” the signal documentary on The Hinabi Project’s third exhibit on Philippine textile arts, kicked off Filipino American Month, at the Asian Art Museum’s Samsung Hall, on Sept. 27.

The documentary traces the migration of textile art between the mountain cultures of the Cordillera and coastal weavers of Ilocos. A dance and music performance of the International Dayaw from the National Commission for Culture and Arts of the Philippines (NCCA), brought to an audience of about a hundred museum patrons, students, textile and dance enthusiasts, the culture of the Cordillera, represented in this instance by culture experts from Kalinga and Ga’dang.

NCCA shared its expertise on cultural communities through films and live performances to showcase the vibrant ancestral culture of the Philippines. To heighten the notion of strength in diversity, International Dayaw included cultural experts from the Subanen of Zamboanga, Mindanao. 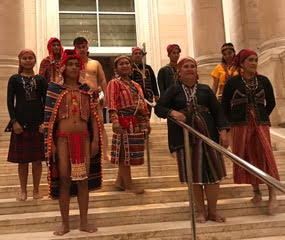 In their unity dance, accompanied by the throbbing beat of bamboo and gong instruments, both the Cordillerans and the Subanen, came together in a budong, the traditional peace ritual of the mountain peoples. This coming together marks a laga, a weaving of diverse threads of cultures with common ancestral roots.

Protected by mountain ranges, the Cordillera withstood the direct impact of three hundred years of colonization by Spain and four decades under the United States.

In his welcome address, San Francisco’s Philippine Consul General Henry Bensurto Jr. said the Dayaw, the documentary, and the on-going exhibit at the Mills Building, were a clear display of the strength that comes from the diversity of Philippine culture and mirrored in San Francisco.

The documentary, the exhibit, and performances were achieved under the aegis of The Hinabi Project, an initiative of the Philippine American Writers and Artists (PAWA) and the with exceptional partnership and collaboration of the NCCA, the Department of Tourism North America, the NGO Non-Timber Forest Products Exchange Programme, the Philippine Consulate General of San Francisco, and the Asian Art Museum.

The film was shot on location by LivingAsiaChannel.tv during August of this year.  The “Mountain Spirits: Textiles and Folk Arts of Cordillera and Ilokos” was officially launched on Sept. 22 at the Kalayaan Hall with a spectacular rendition of Cordillera lore by the Parangal Dance Company of San Francisco.

The exhibit runs through October to December 7 at the Mills Historic Building on 220 Montgomery.

Additional film screenings and Dayaw performances this week are scheduled at the Kalayaan Hall on 447 Sutter Street on September 29 at 6 p.m. and at the Oakland Asian Cultural Center on September 30 at 2 p.m. In both locations, a trunk show of indigenous textiles and crafts will be available for sale.

The final appearance of the Dayaw will be at City College of San Francisco’s Wellness Center on Phelan Ave. at 6pm. Check www.thehinabiproject.orgfor more information on The Hinabi Project.