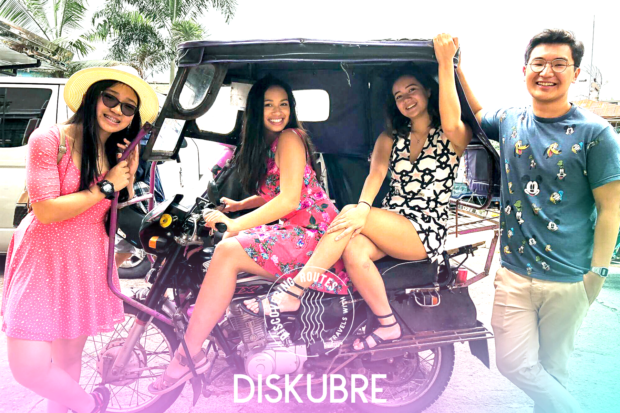 The four young adventurers of Discovering Routes travels with Diskubre take a trip to their land of ancestry for a journey of self-discovery. From left to right, Feih Hidalgo, Elaina Ficarra, Alex Brown, and Calvin Santiago. CONTRIBUTED

NEW YORK –A mesmerizing incantation, a traditional prayer of an Ifugao shaman of indigenous people of the Cordilleras, opens the series trailer of “Discovering Routes travels with Diskubre.” It’s a different place of magical energy and ancient architectural wonders.

The show’s new digital exclusive series features four young travelers who embark on some big adventures for a journey of self-discovery. New episodes will be released on Thursdays at 5:00 p.m./PST on DiscoveringRoutes.com beginning September 27, 2018.

Meet the new cast: Alex Brown, 22, is a young professional and from Sydney, Australia. Calvin Santiago, 21, is a junior in college from New Hampshire. Elaine Ficarra, 17, currently holds the title of Miss State Capitol’s Outstanding Teen 2018 of the Miss America organization from Pennsylvania. Feih Hidalgo, 14, is a freshman high school student from the Bronx, New York.

The cast went on an 11-day tour around the Philippines that viewers will relive through the series.

Calvin says that he is “excited to share stories of our travels with my family and friends, hoping they will take the same trip that changed my outlook of the Philippines forever.” Elaine Ficarra and Alex Brown take in the sight of the hanging coffins of Sagada. According towww.roughguides.com, “members of the Igorot tribe of Mountain Province in northern Philippines have long practiced the tradition of burying their dead in hanging coffins, nailed to the sides of cliff faces high above the ground.” CONTRIBUTED

For Alex, the trip brought about a moment of reflection as a half-Filipino woman. “After listening to the oral history of each town, witnessing people’s daily routines, and experiencing a sample of their traditions, I am more in touch with my Filipino side more than ever.”

“It’s a beautiful, rich, and complex part of Filipino culture that you won’t see anywhere else, and viewers get to experience it through the lens of our four adventurers.”Ocampo shares that “watching Elaine, Alex, Calvin and Feih was exactly like traveling with them – at times, it was crazy fun, then tear-jerking, then unrelentingly moving.”

The quartet explores the mountains of the Cordilleras, come face-to-face with the hanging coffins of Sagada, and witness ancient rituals performed by local shamans. The series also presents a rare feature on an icon of Philippine independent cinema, legendary filmmaker Kidlat Tahimik.

Ocampo maintains that “Discovering Routes is all about big adventures to fuel an inward journey. The way to get there is to understand where we’re from and what parts of our culture and our story make us unique, strong, beautiful. When we go back out into the world with that wisdom, we become limitless. That’s what this show is about.”