St. Valentine’s Day Massacre in the age of Trump 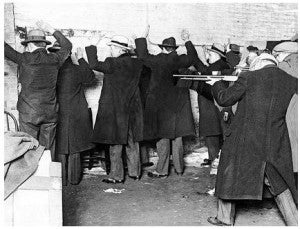 NEW YORK—On February 14, 1929, somewhere in Chicago, bullets instead of love and roses were dispensed.

On that day, blood was spilt rather than champagne.

On that day, hate trumped love.

In what has since been tagged as the “St. Valentine’s Day Massacre,” four killers from Al “Scarface” Capone’s gang, disguised as police officers, entered the building from where his rival gangster Bugs Moran ruled Chicago’s North Side. Seven of Bugs’s capos were lined up against a wall and gunned down. Bugs was fortunate enough not to be around.

Moran and Capone were at each other’s throats to lord it over Windy City’s criminal kingdom, as a result of which both criminal enterprises suffered many depredations and killings inflicted by the other side. But that Valentine’s Day slaughter remains the most infamous one, commemorated on screen, with the funniest being Some Like It Hot, a delightful and zany flick that starred Jack Lemmon and Tony Curtis as the prototypical odd couple in transgressive attire, and the effervescent sex goddess La Monroe.

Today, hate continues to trump love, with even grimmer consequences, spurred on no less by the highest office in the land. The Donald has given his henchmen their marching orders, and so the massacre has begun, on a scale that will dwarf the foul misdeeds of both Bugs and Scarface.

In Trumplandia, millions of citizens may lose their medical coverage, labor and safety regulations will be relaxed, civil rights undermined, and the entire Muslim world antagonized, with the refugee and immigration ban promulgated by Trump’s now-infamous executive order forbidding entry into the U.S. of visitors from seven countries, all with Muslim majorities.

Christians from these countries won’t however face such restrictions imposed on their fellow but Muslim citizens—clearly a violation of the Constitution that forbids discrimination on the basis of faith. And as has been pointed out it is a ban that is completely un-Christian.

Trump apologists point out that not all Muslim majority nations are on the list, Saudi Arabia, for instance, a U.S. ally—but whence 12 of the 19 attackers on 9/11 came from. This rather disingenuous argument ignores the fact that all countries on the list are Muslim-majority.

Encouraged by Steve Bannon’s proximity to the white man in the White House, white supremacists have slithered out from underneath various rocks. Bannon and Trump are so close in fact that pundits have referred to the former as “President Bannon” as folks once referred to Dick Cheney, when he was VP to George W. Bush, as “President Cheney.”

The supremacists know, as do we all, that the Donald’s promise to make America great again is really a code for reasserting whiteness above all. (A number of these supremacists are ironically voters of color, whose imaginations are so vivid that they fancy themselves white.)

In the archipelago, “massacre” is not simply to be seen as a metaphor but should be taken literally. For in the poor precincts of urban areas, in the dusty corners of rural town and barrio, blood continues to be spilled, and bullets generously dispensed by either the cops or vigilantes or both. More than 7,000 mostly poor people have had their lives terminated, sans judicial process. (These murders are now termed “EJKs,” or extrajudicial killings, supplanting the Marcosian label of “salvagings.”)

Cesar Gaviria, president of Colombia from 1990 to 1994, writing in The New York Times about the drug war his administration conducted against Colombian cartels—under his watch Pablo Escobar, head of the notorious Medellin cartel, was killed in a shootout—cautioned President Duterte that relying on police and military might is not enough, that this renders the whole situation “unwinnable,” and that such a war “is essentially a war on people.”

Gaviria says that once he and his government reframed the drug dilemma as more of an economic and social problem rather than a criminal one, things improved.

Like his comrade in arms across the ocean, Duterte is notoriously thin skinned and responds in the same manner to any criticism, helpful or not.

In the meantime the poor are being killed and all he cares about is the appearance, as with the Donald, of being in command. Such a high price for vanity.