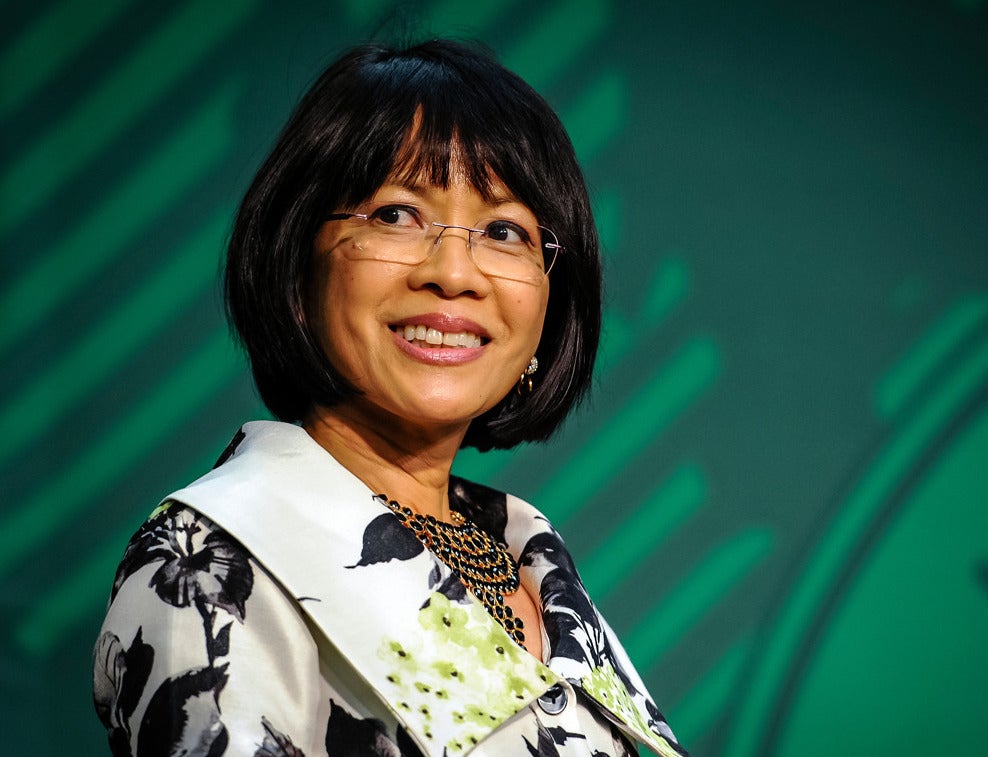 Astrid S. Tuminez smiles to the crowd at the public meeting of the board of regents where she is introduced as the seventh president of Utah Valley University in Orem on Friday, April 20, 2018. ADAM FONDREN/DESERET NEWS

Tuminez made headlines in April for becoming the seventh president of the largest public university in Utah. A self-confessed polyglot, she did not hesitate to make use of her knowledge to welcome the students while introducing herself to them, as shown in a video uploaded by the university’s official page on Facebook, Sept. 17.

“Welcome to Utah Valley University! (UVU) My name is Astrid Tuminez and I am the president of the university,” Tuminez started her greeting in Spanish. She then spoke for a bit in English, wondering out loud how she should say the last part of her line.

Tuminez recounted her childhood using her native language, Ilonggo: “I was born in the Philippines, in the province of Iloilo, in the village of Pali, in Tigbauan. When I was a little bit older, my mother took me to the city and we lived in the squatters called Gomez and Ortiz.”

After they moved to the city, she recalled how a group of Catholic nuns asked her and her sisters to study in their school for free, switching from Ilonggo to Tagalog. During her stay at Colegio del Sagrado Corazon de Jesus, she read a lot of books at the library to pass time whenever she had no money to buy food for the recess period.

She noted that her love of reading was the reason why her brain “improved and got better.” Tuminez then gave a piece of advice to UVU students: “So what I want to say to all the students is work hard, study hard and read a lot of books so you can finish what you set out to do at UVU.”

“I studied Russian literature and Russian language at Brigham Young University,” she stated in Russian. “After Brigham Young, I entered Harvard University and studied Sovietology. And then, I finished my doctoral degree at MIT.”

Because of the knowledge she garnered from studying in those universities, she was able to work in different countries including the United States and Russia. She was also given the opportunity to work in Hong Kong, Singapore and her native land, the Philippines.

She capped off her greeting by speaking in French, the so-called language of love: “I love French food and French cuisine. I love French poetry. I would like to say to all of you, welcome to UVU. I can’t wait to meet all of you.”

Tuminez was selected to hold the position by the Utah State Board of Regents on April 20. Prior to becoming UVU’s president, she worked as the regional director for corporate, external and legal affairs in Southeast Asia for Microsoft. She also had a background in the academe as the vice dean of research and assistant dean of executive education at the Lee Kuan Yew School of Public Policy at the National University of Singapore. JB