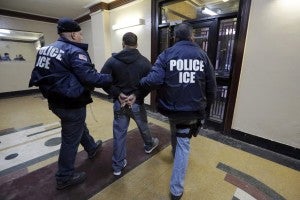 NEW YORK — When ICE officials knock on your door, you don’t have to let them into your home. And in case a law enforcement officer stops you on the road and asks about your immigration status, do not provide any information without your immigration lawyer.

Those were the rights that undocumented Filipinos and all other immigrants in the United States can exercise to protect themselves, according to immigration and community advocates on Wednesday, in the wake of executive orders on immigration issued by Pres. Donald Trump that have sparked massive raids in recent days across the country.

“Don’t open the door to anyone you don’t know,” Sally Kinoshita, deputy director of Immigrant Legal Resource Center (ILRC), told the ethnic press. “Don’t sign any document that you don’t understand [because] that may give up some of your rights to a hearing [with an immigration judge] and other benefits.”

Every immigrant can deny ICE officials entry, especially if they don’t have a warrant issued by an immigration judge, advocates say. In most cases, because judges issue order of removals and not warrants, ICE officials do not have warrants with them.

“Immigrant communities,” Konishita added, “should know that these rights have not been changed.”

Giselle Ruiz, a staff attorney at ILRC, noted that these rights are rooted in the U.S. Constitution and that every individual in the country, regardless of immigration status, is protected.

“These are parts of the Fourth Amendment—the right of the people to be secure in their homes against unreasonable searches—and the Fifth Amendment, which is basically your right to remain silent,” Ruiz said. “Trump cannot take away these rights [from you].”

Trump’s executive orders have broadened the definition of “criminal alien,” in which it potentially makes almost every undocumented immigrant a priority for deportation.
Under the Obama administration, though he deported 2.7 million immigrants from 2009 to 2016, the priority for deportation was focused on immigrants who were deemed a threat to public or national security, or had committed serious felony offenses.

Not threats to public security

Most immigrants did not fall under any of these categories — and this is the reason why many undocumented immigrants, even the ones with a deportation order, were allowed to stay in the United States.

But among the first executive orders that Trump has issued since he took office on Jan. 20, undocumented immigrants with any criminal offense—including those who have been convicted and those who have not been charged but are believed to have committed “acts that constitute a chargeable criminal offense”— have become a priority for deportation.

This means that any undocumented person in the country (including those who overstayed their visas) is a priority, advocates say, and that it encourages “local law enforcement,” such as a police officer, to “cooperate with federal immigration authorities to enforce some of these priorities.”

Advocates believe that this move by the present administration is part of the campaign-promise that Trump gave to his supporters.

As of Friday, Feb. 10, nearly 200 individuals from California, Arizona, Georgia, North Carolina and South Carolina were arrested in a weeklong immigration operation.

In Los Angeles alone, more than 150 arrests were reportedly made last week.

Former Los Angeles Mayor Antonio Villaraigosa issued a statement: “The recent reports of ICE raids in our region have created great anxiety and are justifiably disturbing. Particularly given Pres. Trump’s rhetoric targeting immigrants, it is critically important that we stand together to protect each other.”

The U.S. Department of Homeland Security officials described to the media the operations as “routine.”

While no one could verify its authenticity, advocates noted that there have been some leaked documents showing that Trump may issue more executive orders on immigration.

These leaked memos include ending the Deferred Action for Childhood Removals, or DACA, a program that Obama issued in 2012. To date, more than 740,000 undocumented immigrants— including Filipinos— who came to the United States when they were younger than 16 years old, have been recipients of the DACA program.

According to a report by the Migration Policy Institute, Filipinos were among the five highest DACA-eligible populations in the country. Last year alone, about 22,000 Filipinos were eligible for DACA and 28 percent of them filed their applications.

“If this [leaked memo] happens, they [DACA recipients] will lose their protection from deportation and their ability to work legally in the country,” said Kinoshita.

In addition, part of the leaked memos say that the Trump administration will conduct a report on how much money the government spends for refugee assistance program, how many foreign workers affect job opportunities for U.S.-born citizens, and how many undocumented immigrants committed crimes.

Pitting others against immigrants

“They [Trump administration] is really trying to pit people of the United States against immigrants — that immigrants [pose] danger to communities or drain the resources,” said Kinoshita. 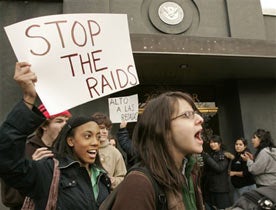 In the Filipino American community, many are alarmed by unverified reports that the Philippines, because of the Muslim presence in the south, will be soon added to the seven countries facing Trump’s travel ban.

“Anecdotally, we’ve heard about people who are not part of the seven countries were detained at the airport or were not being able allowed to board their flight,” said Esther Sung, a staff attorney of National Immigration Law Center. “But it is difficult to know because we don’t have the specifics of the case.”

Sung added: “The Ninth Circuit Court of Appeals acted, as the courts are supposed to, as a necessary check to the blatant constitutional overreach emblazoned by Pres. Trump’s unlawful and un-American executive order. This decision means that, for now, people seeking refuge from horrific conditions will not be turned away, that families separated by this discriminatory policy can reunite. This is a reminder to everyone: our constitution protects us all, and no one—not even the President—is above it.”

Still, for Ruiz, knowing and defending your rights would be critical in these times of harsh immigration policies.

“Immigrants themselves should be at the forefront of protecting their own rights,” she said.