An open letter on celibacy to our young priests

An open letter on celibacy to our young priests 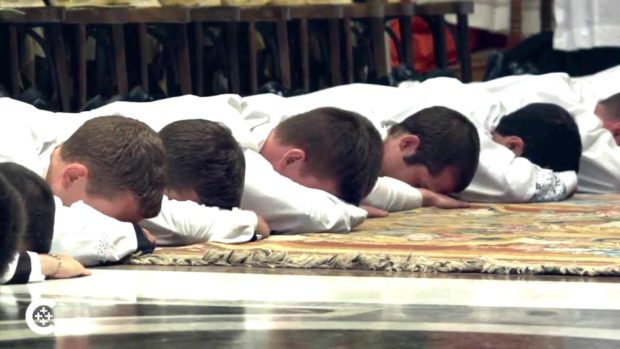 After your ordination, the frail but chosen persona has become an alter Christus. Oh yes, God’s ambassador plenipotentiary and His indelible mark saying “you are Mine” stays in you for all eternity. Even when at times you manifest the ugliness of human weakness, you remain God’s masterpiece forever. And I believe so.

How sublime and how wretched! Alas, the Sacrament of Holy Orders cannot disconnect the brutish tendencies from you as you were empowered to do supernatural functions, such as to celebrate Christ’s own Paschal Mystery and to forgive sins.

I thought of you when I came across the prayer of St. Augustine (354-430 AD), a prayer he uttered before becoming a bishop: “Grant me chastity and continence, but not yet. For I was afraid lest Thou shouldst hear me too soon, and too soon cure me of my disease of lust which I desired to have satisfied rather than extinguished” (Confessions, Book 8, Chapter 7).

St. John Chrysostom, once Patriarch of Constantinople, made this contention and, if I may, I humbly suggest this opinion be posted in the dressing mirror of every young priest — in bold letters: “It is becoming that he who accepts the priesthood be as pure as if he were in heaven” (Treatise on the Priesthood).

In the words of St. Gregory the Great, you can actually “love the difficulties of this world for the sake of eternal rewards,” huius mundi aspera pro aeternis praemiis amore (Moralia in Job, VII, 21).

But then again, to win the future promise is several light years away from today and you, our young celibate presbyter, remains rooted on earth, surrounded by the most beautiful children of Eve. You struggle in the here and now. And since tomorrow is transcendent and quite hard to fathom, it seems you put it into the DEPARTMENT OF FUTURE PLANS. “Heaven can wait” might be a better excuse.

Truth hurts, truly hurts. And it’s hurting to know that, in the new millennium, the priest shortage is deemed the second most urgent problem, indeed a crisis, facing the Catholic Church; the first being the sexual abuse scandals perpetrated by some predator-clergy. Only a few are guilty of the scandals and yet the good workers in the Lord’s vineyard are altogether affected so boorishly.

Why is the Catholic Church going against the law of nature?

So much of this deals with human sexuality, libido, and every single priest’s much-reflected-and-prayed-upon decision to embrace celibacy and chastity. I am concerned because right here, right now, the priestly celibacy is under attack – under relentless and malicious attacks.

Critics say, compare a man and a woman in their psycho-physiology and see how they match. It’s because their sexual complementariness is wrought by Mother Nature and designed by YHWH God Himself when, in the beginning, “male and female He created them.” So, they ask, why practice celibacy?

Normally produced by the hypothalamus, oxytocin plays a role in social bonding and sexual reproduction. Being physically and intimately close with another human person is known to increase levels of oxytocin in the brain, known as the “cuddle hormone,” that makes one feel happy and safe. So, they ask, why practice celibacy?

When He commanded, “Go and multiply,” YHWH God has placed a pleasure, so awesome and amazing, in the natural operations necessary for the preservation of the human species. Otherwise, who would make love if sexual activity is not enjoyable?

A man and woman falling in love is a primal instinct, and you can’t dust it off. You can’t go against it either. Now, why does our Mother Church, supposedly an expert in humanity, demand permanent continence from you, her deputy?

As you celebrate your priestly anniversary and grow older in your ministry, you have known by heart that the life of celibacy is the polar opposite of easy, inasmuch as it goes against your primal instinct, every man’s basic instinct.

That imitatio Christi is essential for you, our young priest, who act in persona Christi and the more you fight back the devil with your armor of chastity, the more you are configured with Jesus.

By practicing celibacy, you dedicate yourself completely in the service of God and humanity, in ora et labora, not as a partial donation but “a total gift,” a 24-7 commitment, a complete oblation of yourself to the Lord and to His Church (Paul VI, Encyclical Sacerdotalis Caelibatus, 1967).

We, the laity, care for you not because you are intrinsically lovable (you know that some members of your tribe are not), but because you are at the center of every Catholic’s sojourn towards God: in baptism; confirmation; reconciliation; Holy Communion; matrimony; counseling; etc. Thank you, Reverend Father, for being our traveling companion all these years, for accompanying us in our journey of faith.