AP Fact Check: Trump’s disloyal official is not a traitor 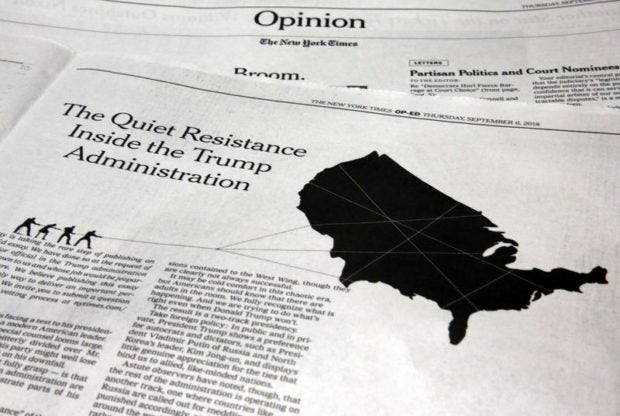 This photo shows an anonymous opinion piece in The New York Times in New York, Thursday, Sept. 6, 2018. President Donald Trump lashed out against the anonymous senior official who wrote it, claiming to be part of a “resistance” working “from within” to thwart the commander-in-chief’s most dangerous impulses. AP PHOTO

WASHINGTON— President Donald Trump is questioning whether one of his senior officials committed treason by going public about an effort within the administration to thwart his agenda and contain his “eccentric behavior.” The answer is no.

THE FACTS: The official who wrote anonymously in The New York Times about the “quiet resistance” against Trump is surely disloyal to the president but not a traitor in the legal sense.

Says the Constitution: “Treason against the United States, shall consist only in levying War against them, or in adhering to their Enemies, giving them Aid and Comfort.”

Note the “only.” Treason is extremely narrowly defined, both in the founding document and in federal law.

QUIZ:Which of these acts — real or theoretical — are treasonous?

—a U.S. official taking payoffs from China to advance its interests.

—the Cold War case of Julius and Ethel Rosenberg, who were executed for giving atomic secrets to Russia.

—the FBI official known as Deep Throat who undermined Richard Nixon’s presidency with his Watergate revelations.

—protesters burning the flag and a public figure in effigy outside the White House.

Treason occurs when a U.S. citizen, or a non-citizen on U.S. territory, wages war against the country or provides material support — not just sympathy — to a declared enemy of the United States.

The Rosenbergs were convicted of espionage, not treason, because the U.S. and Russia were not officially at war. No one has been convicted of treason since the aftermath of World War II, few have been through history and no one has been executed for that crime, says Carlton F.W. Larson, a University of California law professor who has a book coming on treason.

In 2006, the Bush administration brought a treason indictment against Adam Gadahn, an American who authorities say became an operative and spokesman for al-Qaida abroad. The Obama administration said he was killed in a 2015 counterterrorism operation in the Pakistan-Afghanistan border region.

Treason is addressed in the Constitution as part of an effort by the framers to prevent the government from using it as a reason to suppress political speech, said J. Richard Broughton, associate dean at University of Detroit Mercy and a member of the Republican National Lawyers Association.

The wording was derived from England’s treason statutes, but narrowed to exclude cases involving alleged disloyalty to the king . Congress has little if any power to change the definition and the executive branch can only bring charges in extremely limited cases.

Trump’s opponents have used “treason” loosely as the special counsel investigates contacts between the Trump campaign and Russia, and it is thrown around widely in the public discourse by all sides.

Trump has been accused of it, for being cozy with Russia, Hillary Clinton for being sloppy with her emails as secretary of state and the late Sen. John McCain for various episodes of not getting with the program.