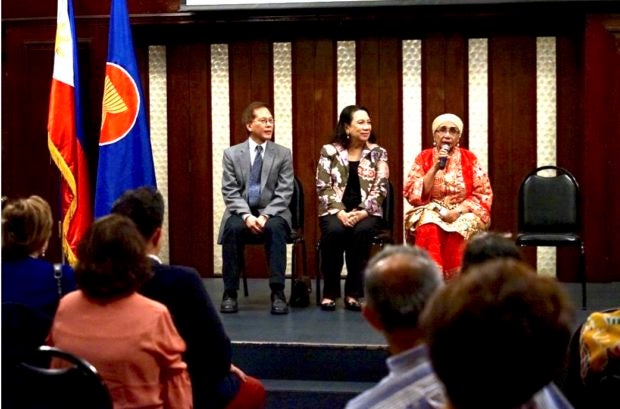 NEW YORK – “Sinehan sa Summer 2018 Edition” closed the series with a powerful indie film about women caught in the middle of a clan war, struggling against cultural norms to find a solution to their brutal situation.

“Women of the Weeping River” is set in a remote community in Zamboanga and Jolo, Sulu with the river serving as the demarcation line between two families caught in a generations-long blood feud.

Directed by Sheron Dayoc, the film earned praise and moved audiences in its portrayal not just of how women bear the sorrow resulting from the senseless loss of life

brought by tribal conflict but also how they courageously struggled to stop the cycle of vengeance.

During the talk back, Sharifa Pearlsia Ali-Dans, who was then Assistant Secretary of the Department of Interior and Local Government – ARMM, and a supporting actress in the film, mentioned that the cast were not professional actors and actresses but Tausugs from Zamboanga and Sulu so the dialogue and narration were done in the Tausug language.

When asked about “rido” or clan war, she emphasized that Islam does not teach them to avenge, but rido has more to do with the culture of protecting their families. She thanked the Consulate and its partners for including the film in the Festival.

Fiel Zabat, a member of the Sinehan sa Summer Screening Committee, facilitated the talk back.

Many members of the Tausug community in New York and New Jersey, with some of the audience coming from as far away as Texas, viewed the screening. Members of the Mindanao State University alumni, Kinding Sindaw Melayu Heritage who are mostly Maranao, Philippine Nurses Association in New York and Philadelphia and the film enthusiasts who were regular viewers during the month-long festival were also in attendance, resulting in a packed Kalayaan Hall.

Sinehan sa Summer, now its 11th year, was held every Wednesday from August 1 to 29, 2018 at the Kalayaan Hall of the Philippine Center. This year’s series was aimed at broadening the audience of Filipino American and mainstream viewers. This year, Sinehan featured one Master Highlight: Peque Gallaga’s “Sonata,” two indie films and 24 short films. All of the screening days had SRO attendance.

In addition to regular Wednesdays, for the first time, the Sinehan sa Summer Outdoor Series screened films outside of New York City, to reach out to film enthusiasts in nearby States. Kids Philippines Inc., in Connecticut hosted the screening in Griswold, Connecticut and the National Federation of Filipino American Associations-Region I and Philadelphia Asian-American Film Festival hosted the event in Philadelphia.