Why 10 minutes with Sen. John McCain left a lasting mark on me

Why 10 minutes with Sen. John McCain left a lasting mark on me 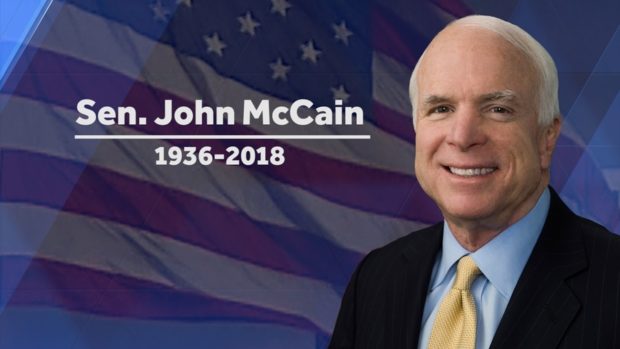 NEW YORK — The death of Sen. John McCain on Saturday brought back vivid memories of that special day when I had a chance encounter with him. As a Filipino American, meeting an extraordinary man who believed and fought for immigrant rights was a moment I have cherished my whole life.

It was late February of 2006, another cold, long-shadowed morning in New York City. That day at a news conference, McCain was expected to announce the fate of an immigration reform bill, “Secure America and Orderly Immigration Act of 2005,” that he and Sen. Edward Kennedy introduced, and in a few days the Senate was about to begin discussing immigration legislation.

As a young journalist who at the time was covering immigration for the Independent Press Association, I was there with a mission: Bring firsthand information to hopeful immigrant families and their supporters across the country who would be listening closely to McCain’s moment of truth.

I waded into a conference room packed with workers, union leaders, and reporters, only to find that every seat was occupied. Then I spotted a folding-chair leaning against the wall, about a couple of steps away from the podium in front of the room.

The chair may have been reserved for the moderator. Yet I was resolute to be visible so I could easily ask the Arizona senator a question.

As the news conference went on, I realized I was so close to McCain that I could clearly hear his breathing each second that he paused. McCain, who was a prominent Republican standard-bearer of several efforts to overhaul the American immigration system, seemed to be of short stature in the flesh, but I genuinely felt his larger presence, his eloquence and, most especially, his sincerity.

When the event’s moderator opened the floor for a brief Q&A, a sudden roar filled the room. I couldn’t get the moderator’s attention and didn’t get a chance to ask a question. I slipped my notepad into my bag, quietly preparing to leave. Suddenly, I felt a gentle pat on my shoulder.

It was Sen. John McCain.

“I saw you raise your hand quite a few times,” he said, smiling at me. “What was your question, young man?”

I was stunned. I briefly introduced myself and shook his hand. Then, taking advantage of that rare one-on-one moment, I asked how optimistic he was on an immigration reform that would provide a path to legalization and family reunification for millions of undocumented immigrants in the country.

He looked directly at me and said: “I will do my best to resolve our disagreement in the Senate on some fundamental issues. I’m hoping we will have an immigration reform in December.”

Immigration issues also come too personal for me. When I first came to America on my own, in my early 20s, this country gave me an opportunity to go to two Ivy League schools through fellowships and hard work, and allowed me to experience the simple joys, comforts, and privileges that every citizen deserves.

Truth is, as a politician, McCain had also many flaws, and we may all have the tendency to gloss over someone’s weaknesses when he or she dies. But my personal American journey resonates with McCain’s description of immigration as a pillar of “American exceptionalism” and that this great nation “doesn’t build walls to freedom and opportunity.”

The bill that he and Sen. Kennedy sponsored was unsuccessful, but most of its provisions created a broad framework for subsequent bipartisan reform efforts backed by President George W. Bush. Unfortunately, on June 28, 2007, the Senate did not get the 60 votes necessary to pass the bill.

But that meaningful experience with McCain, though lasting only for about 10 minutes, had taught me what every true American leader should be — compassionate, committed, and determined; someone with a calm disposition to resolve antagonistic factions, who can set aside political party conflicts and instead, work with other elected officials for all Americans.

McCain’s actions that day, like those mirrored throughout his life, had also shown me his belief that everyone, whether native-born Americans or immigrants, refugees or asylum-seekers, should be treated with equal respect and dignity in our country.

Since his passing over the weekend, many eulogies have already been written—and I expect that more and more kind and moving reflections of him will be offered. But for me, McCain will always be one of America’s great legacies. His words, core values, and example will leave a profound and indelible imprint on me as long as I live.

Anthony Advincula, born and raised in the Philippines, is a New York-based writer and correspondent for the INQUIRER.net U.S. Bureau.