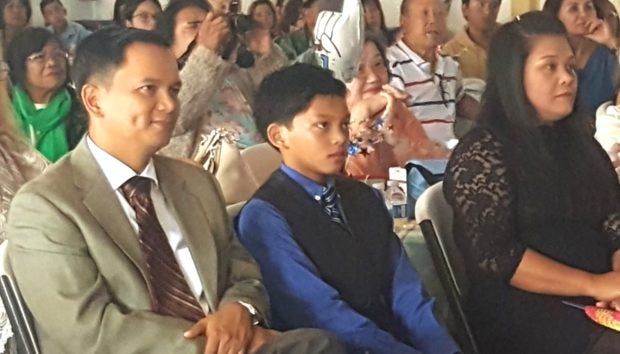 Dad Chris (left) and Mom Cynthia (right) prefer that no pressure is put on son Clark (center) despite all the praises and accolades heaped on their kid. INQUIRER/Jun Nucum

SALINAS, California — After getting much coverage and accolades from broadcast, print, and internet-based news outlets worldwide, the 10-year-old Filipino American Superkid of swimming who broke a long-standing swim meet record held by Olympics champ Michael Phelps,got much deserved recognition from local leaders of his home city of Salinas, Monterey County, as well as the Philippine Consulate in San Francisco.

In is message, Bensurto said young Clark’s accomplishments brought honor to the City of Salinas and the entire Filipino American community all over the world and came at a time when “the Consulate is looking for young champions who can inspire other Filipino Americans to strive for excellence but at the same time be proud of their Filipino roots and heritage.”

Crowd at the packed Filipino Community Center in Salinas, California went all out to support their new hero. INQUIRER/Jun Nucum

“You are an inspiration to many of us and we would like to highlight your achievements in the hope that it will encourage other Filipinos to dare to dream and dream big. That is the magnitude of what you had accomplished,” declared Bensurto.

Supervisor Salinas, a former teacher, congratulated Clark’s special education teacher-parents, Chris and Cynthia, for being prestigious themselves as Clark is.

“One thing that I tried to impress on public school students is to set their dreams and their goals. You were doing those swims that have now distinguished you as one of the greatest ten-year-old swimmers in the history of our country,” Salinas extolled Clark.

Supervisor Phillips referred to Clark as not just the pride of the Filipino community, but also the pride of all the communities particularly in Monterey County. Salinas Mayor Joe Gunter, on the other hand, promised to keep track of the direction that Clark takes “with the guidance of his loving parents, good teachers, and great coaches, Dia and Travis Rianda in swimming.” 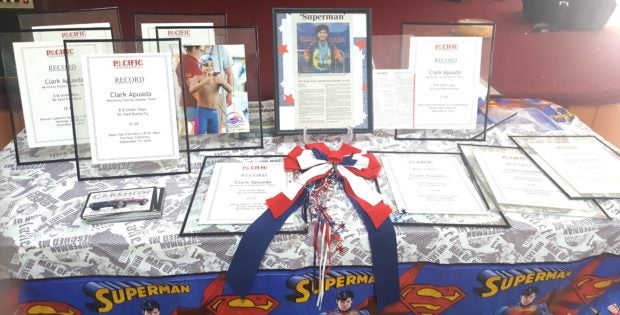 In his latest message to Clark, Olympics swimming champ Phelps urged Clark to keep up the good work and “don’t, don’t, don’t give up. It is not easy but if you want it, you can achieve it.” Phelps wants to see Clark compete in the future swims.

Clark himself was amazed at the presence of a lot of supporters, admitting that “there are a lot of thoughts going in my mind and I couldn’t really express one particular feeling upon hearing Michael Phelps’ latest message. His message is inspirational to me.”

Reacting to the accolades and all the praises heaped on him, Clark stressed, “I don’t feel any pressure really because those are the things to motivate me, pump up my energy level even more.”

Clark’s father, Chris, said they were beyond words in expressing how important the recognition was to to Clark and their family.

Clark Apuada (fifth from left front) is shown with coaches Dia Rianda (extreme left)  and Travis Rianda (third from right back with cap) together with his teammates in the Monterey County Aquatic Team that now looks to him as an inspiration. INQUIRER/Jun Nucum

“We are very humbled with the warm reception of the community and the different leaders who came here to support to our son. Thank you for recognizing our son’s efforts in the field of sports. Sa mga kababayan po namin sa Pilipinas at buong mundo, tagumpay po nating lahat ito!” (to all our compatriots, this a victory for all of us) Chris said.

Chris also acknowledged that everything was happening so fast that Clark is still very young to understand a lot of it.

“We are always here to support his goals and dreams all the way. We want to make sure that he continues to be the child that he is, to continue to have the fun even in his drive to reach his goals. We don’t want him to feel pressured. As parents, we want him to continue to be our son, the child who will have a happy and fulfilling life,” vows Chris

Mom Cynthia agreed that there wouldn’t be any changes at all in their life as a family.