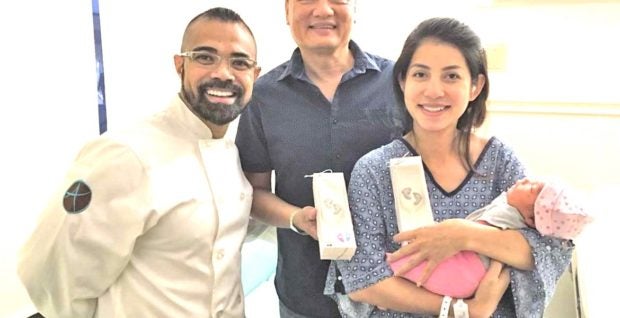 LOS ANGELES — Giving birth is life’s greatest phenomenon, and not just for the parents welcoming a new, little bundle of joy into their family. For many hospital maternity ward staff, the great pleasure of being an important part of each family’s delivery of a new family member never fades.

That’s why Fountain Valley Regional Hospital and Medical Center decided to partner with Filipino-American sugar artist and chocolatier Albert Daniel of Albert’s Petite Sweets to make and deliver cake pops as a parting gift to all the families in the maternity ward.

“We are very pleased and humbled that they are sharing this unique moment and this joy with us and letting us be a part of their joy and happiness, and we wanted to show our appreciation in some way and it feels like this is a great way to do it,” said Azita Pournaghmeh, director of maternal child services of Fountain Valley Regional Hospital and Medical Center.

Pournaghmeh said that they chose to gift cake pops because food is a “symbol of celebrations.” She added that the first few patients who received the cake pops earlier this month were “quite pleased,” and the staff is looking forward to gifting them to more patients.

“I think [these cake pops are] wonderful, beautiful and I can’t describe it in words,” Guillermo Samano of Santa Ana, whose family was one of the first to receive Daniel’s cake pops.

Of his creations, Daniel said he “didn’t know my cake pops had that ability to really make an impact on someone’s day or life to where it resembles something really important to them. It makes me even more happy and proud and excited to be a part of their journey.”

Albert’s Petite Sweets began presenting families with the cake pops this week, and the hospital is looking forward to continuing the partnership.

“He’s been such an artist and so accommodating to us and trying to go with our instructions and suggestions so we’re looking forward to a long-term relationship,” Pournaghmeh said of Daniel.

Daniel, 40, was born in the Philippines and moved to the United States in 1987 when he was nine years old.

Like many Filipinos, he was expected to become a medical professional, studying Recreation Administration at Cal State Long Beach to work with children with disabilities and geriatrics.

But after internships and seeing some patients pass away, he realized this wasn’t his passion, so he became a personal trainer, much to his family’s dismay.

Daniel continued to work as a personal trainer for 14 years. As a way to say thank you to his clients and colleagues, he decided to gift them cake pops, which he first saw at Starbucks and thought, “Hey, I could do that.”

He had never baked before, and he initially loathed the 10-hour process of baking cake pops. But his attitude changed when he saw how his clients reacted to the gifts.

‘Hated it at first’

Fueled by that experience, he decided to sharpen his baking skills and capitalized on his re-discovered love for creating, establishing “Albert’s Petite Sweets” from the ground up. And, again, his parents weren’t pleased with this career shift.

But that changed as soon as he saw almost immediate success as a sugar artist. His first client was former NFL player and TV commentator Michael Strahan right before he became a co-host for “Live! with Kelly and Michael.”

From then, his business “escalated,” evolving a small operation in a one-bedroom apartment into a successful business that caters to Disney, Marvel and Netflix, among other companies.

“As an immigrant, it is expected that you are excelling in the medical field, whether you’re an engineer, a doctor or a nurse,” Albert said. “It’s very robotic almost, this expectation, that if you go out of that norm or out of that box, you’re frowned upon. But if you do exceptionally well, then that’s the game changer.”

Now, his family is extremely supportive of Daniel’s business and impressed by the success he has garnered in the few short years of its existence.

Though he has many big-name clients, Daniel said that his partnership with Fountain Valley Regional Hospital and Medical Center is unique in that he gets to be a part of the miracle that is childbirth.

He pointed out that on his usual deliveries, he simply shows up, delivers the product and leaves, but when he delivered to the hospital, he felt particularly elated to see the families’ reactions to his gift and truly saw the impact of his creativity.

“I’m very grateful to have this gift of creativity that I’m able to make somebody happy with my cake pops in addition to what’s happening in their life and to be chosen to be a part of something special and something bigger than me. That makes me really happy,” Daniel shared.