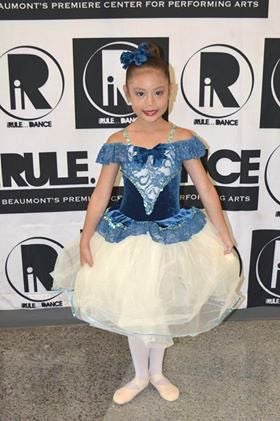 Legendary American dancer and choreographer Agnes de Mille once said that “the truest expression of a people is in its dance and its music. Bodies never lie.” Chloe Liboro, a six–year-old Filipino American, chooses dance to express herself.

Chloe doesn’t talk to strangers, not even to her classmates, yet she tops her GT (Gifted and Talented) Class at Sallie Curtis Elementary School in Beaumont, Texas. But on the dance floor, Chloe is not her usual shy self. She is full of confidence in her every move –pirouette, split, hip-hop, and the latest is acro-dance that combines various dance styles with acrobatic moves. Her eyes are bright and the smile never leaves her face as she bows to the audience.

But when she leaves the stage, Chloe is her usual self again, opening up only to her mother and five siblings. She is so focused on improving her dance skills that the owner of IRule Dance Company, Ms. Charlee Hanna-Rule, a notices her dedication.

Chloe is the 2018 Dancer of the Year -Peewee Category of the IRule Dance Company for the numerous awards and for placing first overall in the VIP Regional Dance Competition in Texas. It was her first dance competition and definitely not the last.

Cathryn Liboro admitted that she was the one who pushed Chloe to dance. Chloe’s pediatrician found nothing wrong with her behavior. She just needs activities that would arouse her interests and creativity. 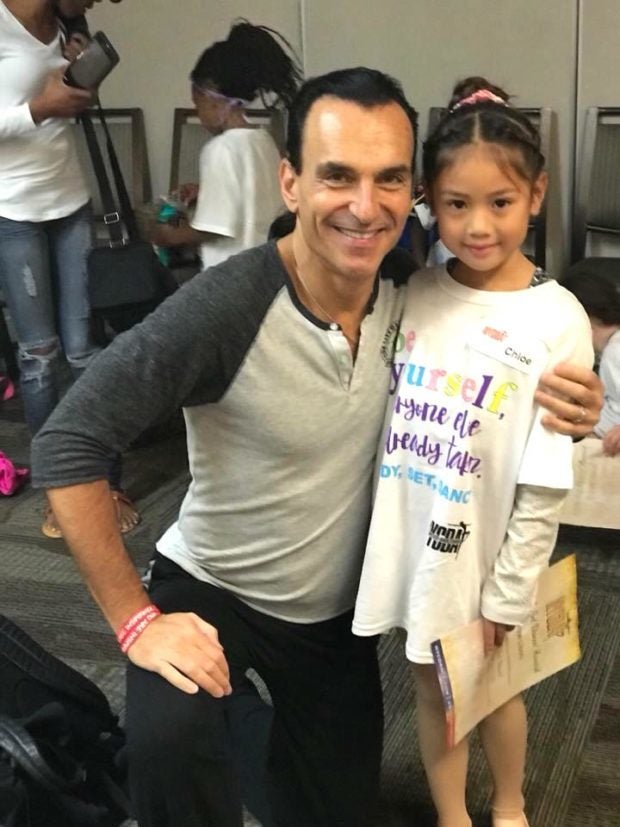 Chloe with the great Joe Lanteri of NYCDA during a dance conference in November 2017. CONTRIBUTED

“Chloe was recruited by her pre-K teacher to boost her confidence because of she was extremely shy,” Cathryn, a private caregiver, recalls.

In September 2017, Cathryn enrolled her then five-year-old daughter in a dance class at IRule Dance Studio.

IRule Dance Studio is the most diverse dance facility in Texas, with over 300 dancers enrolled in various levels. Its website claims to have a “commitment to provide comprehensive individual instruction to all students to empower and build self-esteem while having fun.

“She was too reserved, until now. She doesn’t want to play with other children that there are times that her teammates followed Chloe everywhere just to let her talk,” Cathryn says.

Prior to dancing, Chloe was into gymnastics but it did not require much socialization. Despite their tight budget, Cathryn let Chloe audition for the dance class. She was surprised when owner Hanna-Rule said that Chloe not only qualified for the dance, class but also in a peewee competition team with age ranges from 4 to 6 years old.

lChloe shows strong discipline. She is always on time in her dance class. Cathryn says that Chloe wears the proper dance attire even when practicing, otherwise, she will not dance.

“With Peewee, it was three times a week in a regular class and when there’s a show, they practice every day,” Cathryn explains.

During the first week of team practice for the Peewee Competition, Chloe was placed at the back since she was a neophyte. After three days, she was moved at the middle, and she was in front during the competition, surpassing the other members who enrolled ahead of her.

Chloe did the first recital with the Peewee Team in December. She had her first Regional Competition in Houston sponsored by the VIP Dance and Celebrity Company in February where her team won two golds and one platinum and took first place in the overall Peewee category.

Chloe never seems to remove her dancing shoes. Her group competed again in April for the same company where they won several awards.

From Peewee, Chloe was promoted to Petite, where she was the number one dancer during their recital. Presently, she is a member of the 10-group Acro-Elite Dance where members are already older and mostly in their teens.

“Chloe was enrolled first in a gymnastic class. Her body is very flexible that’s why she likes to be in this level,” Cathryn explains.

In November 2017, Chloe attended the NYCDA (New York City Dance Alliance) Convention in Houston. Meeting the great Joe Lanteri, the founder of NYCDA and known as the most “influential person in dance,” today inspired Chloe more than ever.

Chloe’s dedication has paid off. She has become the line leader of her group since she is always paying attention and never plays during practice.

“When their group won, they qualified for an international competition in a cruise. Unfortunately, we cannot afford to file a leave in our work,” Cathryn laments.

Cathryn is a private care-giver while her husband is a physical therapist. 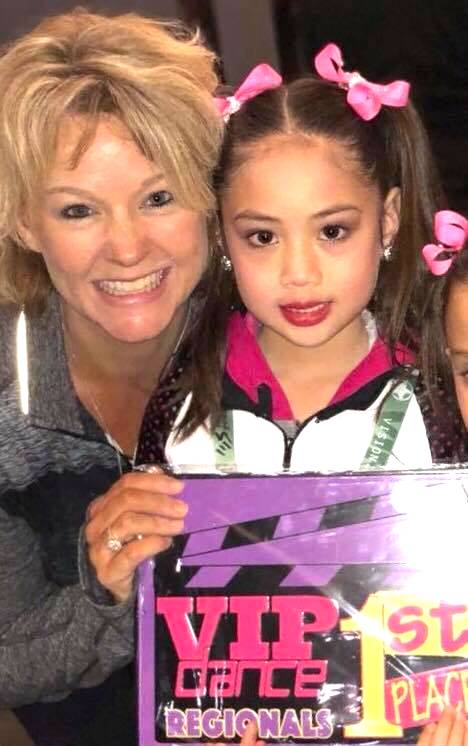 Chloe with Ms. Charlee Hanna-Rule of IRule Dance during the  first Regional Competition in Houston sponsored by the VIP Dance and Celebrity Company in February. Her team won two gold and one platinum and became the first place in the overall peewee category. CONTRIBUTED

During competitions, Chloe’s family shoulders all the expenses like hotels, costumes, and travel.

“When I see her on stage, full of confidence, as if the world is her stage, all the anxieties vanish. I only want to see her fulfilled,” Cathryn enthuses.

Raising a talented child, like Chloe also poses a lot of challenge. Chloe, although the youngest, has five siblings who are also studying. Despite this, Cathryn and her husband are not discouraged.

“She may not be expressive, but dancing helps her to express herself fully,” Cathryn says.

To parents with talented and gifted kids, Cathryn advices:

“It takes a lot of time, effort, and money to make our kids’ dream come true, but let us be always there and support them all the way.  Let us provide them the opportunity to develop attributes that will serve them well in life.”

At the dance studio, Chloe is stretching her body for warm-up. She does a pirouette, then adeveloppe, unfolding her leg in the air, then an arabesque, as if ready to fly.

“I will dance solo!” Chloe says.