Dawn Mabalon and Carlos Bulosan are in the heart

Dawn Mabalon and Carlos Bulosan are in the heart

I recently found myself reflecting on the loss of a person who played such an important role in documenting the Filipino American experience — and on the other pioneering storyteller whose life and struggles she helped introduce and explain to a new generation of Filipino Americans: Carlos Bulosan.

Like Dawn, Bulosan was a writer, activist, and storyteller.  He was also a factory worker, labor organizer, civil rights warrior who took part in significant civil and community rights struggles in the 1940s and 1950s. His book, America is in the Heart, considered an American classic, inspired generations of Filipino Americans and Asian Americans. 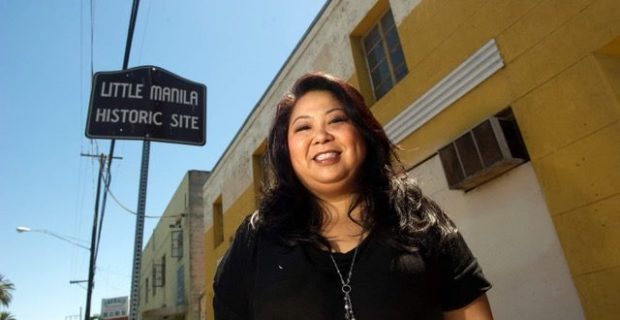 One of them was Dawn, who read Bulosan as a college student at UCLA. In fact, Bulosan’s work inspired the title of her own compelling history of the Filipino American community in Stockton, California, Little Manila Is in the Heart.

Bulosan is even featured in Dawn’s book. It’s fun to imagine what he would tell  Dawn when they meet in the afterlife. Would Bulosan playfully give Dawn a hard time for her sometimes unflattering portrayal of him in her book?

“Did you really have to call me an alcoholic Communist who never really worked in the fields, Ading?” I imagine Bulosan teasing Dawn.

“E, that’s how some of the Pinoys saw you, Manong,” Dawn would respond. “But there are many more of us who know that’s not who you were.”

In her book, Dawn introduces Bulosan by recalling that in Stockton, her hometown, there were old-timers who “regarded the celebrated author as an alcoholic Communist who never worked in the fields, yet wrote as though he did.”

But she paints a more complete portrait of Bulosan, that of a literary giant who was also on the frontlines of many battles against racism and workers exploitation in the United States. 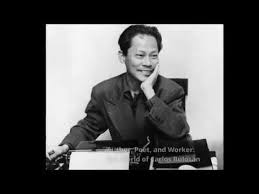 Bulosan paid a hefty price for his activism. He was beaten, harassed by authorities, struggled with poverty and illness. He was, in some ways, unique. Confronted by prejudice and abuse, he fought back and would not be silenced. He became one of the most famous Filipino American and Asian American writers of his time.

By the ‘80s and ‘90s, America is in the Heartwas required reading on many college campuses in California. As a college student, Dawn Mabalon was so moved by the book he told her father, Ernesto Mabalon, about the famous Filipino American writer.

She was surprised by his response. Her father actually knew Bulosan, and so did her grandfather who used to offer the Bulosan free meals “because my soft-hearted lolo couldn’t bear to see Filipinos starve.”

To express his gratitude, Bulosan gave Dawn’s lolo a signed copy of the first edition of America Is In the Heart. Dawn’s lolo apparently wasn’t that interested in the book which, Dawn wrote, was “cast off by the family as scratch paper,” and later used by a toddler member of the family “as her scribbling pad.”

It was Dawn, the historian, who eventually verified her father and grandfather’s stories about Bulosan when she did her own research. Among Bulosan’s papers kept at the University of Washington was one of his letters referring to Dawn’s lolo in Stockton.

“Suddenly, my father’s memories became history, corroborated by archival evidence, and framed by my deeper understanding and embrace of my hometown’s Filipino American history,” Dawn writes.

Instead of picket lines and union halls, she waged battles in and for Stockton where the history she hoped to uncover and chronicle was under siege. The Filipinos of her hometown, Stockton, had endured racism and abuse, and then the physical destruction of their community.

“When I was growing up, my elders rarely spoke about the Little Manila community that had thrived in downtown Stockton or the demolition that destroyed it in the 1960s and 1970s,” Dawn writes. “Few of them ever talked of the intense racism and discrimination that they had survived in Stockton… The loss of Little Manila in the 1960s as a result of urban redevelopment left a traumatic wound for old-timers and second generation Filipinos.”

There were still vestiges of the old Little Manila in the ‘90s and early 2000s. Dawn led the fight to save them and scored an important victory for the Filipino American community. The campaign helped preserve two remaining blocks of the original Little Manila neighborhood in Stockton and Little Manila itself was eventually named one of the nation’s endangered historic places by the National Trust for Historical Preservation.

Dawn was busy at work on other projects at the time of her death. She co-authored a children’s book on the Filipino American farm worker leader Larry Itliong.

And she also consistently supported other projects, other efforts to record and tell the Filipino  American story. The last time I saw her was at the launch of A Time to Rise, the collection of essays by members of the Union of Democratic Filipinos, or KDP, the activist organization that led the US-based fight against the Marcos dictatorship. Many KDP members were the children and grandchildren of the early Pinoy immigrants whose stories Dawn sought to preserve.

It’s striking to note that Bulosan and Dawn both died young. She was only 46 when she died in Kauai. Bulosan was only 43 when he collapsed due to an illness at Seattle City Hall Park in 1956.

I imagine their ‘meeting’ would have turned serious at some point, as they reflected on uncompleted tasks, untold stories.

“You could have written so much more, Manong, told so many more stories,” Dawn would tell Bulosan.

Bulosan would nod and say: “And you too, Dawn. But you’ve accomplished a great deal, ading. And I don’t think we have much to worry about. I’m willing to bet that we have many more storytellers in our community.”