How can my show at San Francisco’s Manilatown on Friday, Aug. 17 not be impacted by the death of Dawn Mabalon? It would have been her actual 46thbirthday.

Mabalon, the tenured U.S. history professor at San Francisco State University, who made the academy take Filipino Americans seriously with her scholarly work, was also my friend.

How close was I? I know the thread count of her bedsheets. I gave them to her and her husband, Jesse, as a wedding gift years ago. 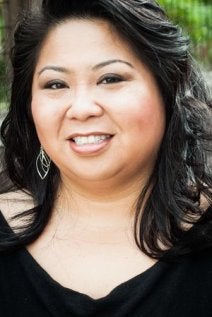 The historian who made history by writing about Filipino Americans, is now history herself. But for now, she’s also news.

How did Dawn die?

I talked to her sister, Darleen Mabalon on Tuesday, once she returned from that fateful family vacation in Kaui that claimed Dawn’s life. Darleen came back without Dawn, who remains in Hawaii pending an autopsy. And she told me the story about Dawn’s final moments.

They had been snorkeling together.  But she wasn’t submerged in the water. Her head was above water, and she wore a life jacket and floaties on her arms, said Darleen, who added she was using a half-mask.

“She loved it. She was a good swimmer,” Darleen told me. “She’d been snorkeling 5-6 times before.  She’d go deeper and farther out.”

She was close to shore this time, in about 6-foot-deep water.  And then Dawn signaled her sister.

Darleen described what happened: “I came out of the water and looked over at her, and she was (saying) like, ‘I’m having an asthma attack,’ and she’s breathing, and trying to breathe in, and slowly, she’s working harder and harder to breath.”

Dawn had her asthma inhaler with her in the water, Darleen said. “It was attached to her in a plastic case,” Darleen told me. “She opened it, used it, put it, back in, and she’s like, it didn’t work. We were speaking all this time, and she’s responding.”

Darleen said it happened so quickly. She reached out to Dawn.

“I turn on my back and grab her hand and try to pull her to shore,” Darleen said. “And my middle daughter is pushing her from behind. And there was a point (Dawn) was breathing and she’s getting tired, but she was still talking. She said call that guy over there in the boat.”

Darleen did just that.

“And behind me my brother-in-law, yelled ‘Help.’ So the guy jumped in. We’re only 50 feet out, but she couldn’t touch the bottom… He turns her on her back and she’s floating trying to get to shore, and as she gets to shore, she’s just breathing heavier and heavier. Working harder and harder. And they turn her on her side, and they’re already calling 911 when they see that guy jump in the water…The paramedics were there within ten minutes; it was very quick.”

CPR was applied there, and then the ambulance came and took Dawn and her husband to the ER, were there they applied the defibrillators to get her heart going.

It wasn’t enough. Dawn’s husband, Jesse, was with her, she said.

Dawn was a bright, energetic ball of fire who took American Filipinos and U.S. history and fused them with an activist’s passion that empowered the ignored and enlightened the ignorant.

If you didn’t know the story, you finally got it. If you were heretofore invisible, you were finally seen.

She didn’t bother with the veritable first draft of history, a/k/a “the news.” Dawn, who originally set out to be a journalist, looked to make a lasting impact.  She got her Ph.D at Stanford and scaled the high bar of the academy. She produced legit scholarship about us in the United States, as if we really mattered.

Dawn Mabalon’s 2013 book, “Little Manila is in the Heart: The Making of the Filipino/a American Community in Stockton, California,” presented the forgotten Filipinos of America in an historical context that could not be shoved under any old rock.

It was there for all to see: A brilliant, personal, yet accessible scholarly work.

As I pondered what Dawn meant to Filipino Americans and the telling of the broader Asian American story, someone found a Facebook post of me and Dawn from her 2013 book launch. It was ten years after I first met her when I worked the diversity beat in Stockton. Along with Dillon Delvo, her Little Manila Foundation co-founder, Dawn was a key source as I wrote stories about their successful effort to preserve the blighted blocks of Stockton’s “Little Manila” into a historical district.

Reading it now five years later just made me cry.

If all the dogeared pages of my copy are any proof, I’ve used that book she handed me like a bible. I compared my father’s story of coming to the U.S.  as a colonized American Filipino with the facts from Dawn’s scholarly work. While writing my one man show, “The Amok Monologues,” I often consulted Dawn’s book to make sure I wasn’t just true to heart, but true to history as well.

It’s the reason my Friday performance at San Francisco’s Manilatown will be dedicated to her.

In one of my last notes to her this past May, I asked Dawn about the lynchings east of San Francisco in San Joaquin County. People get touchy about lynchings. When I mentioned them in a story I wrote years ago, some took umbrage as if no lynchings had ever taken place.

But Dawn’s painstaking research was in “Little Manila,” and she discovered a story published in the Three Stars, an ethnic media publication in the Stockton area.  “A contractor driving near Lodi, just north of Stockton, saw two Filipinos hanging from a tree, and one burned body propped up against the tree trunk,” she wrote, citing the Filipino labor newspaper from an August 1930 edition. 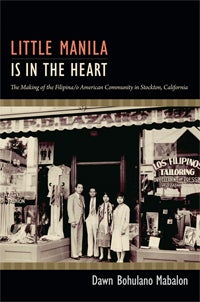 Mabalon’s “Little Manila Is in the Heart.”

Dawn did the scholarly research in libraries across the country, scoured ethnic and labor newspapers, conducted oral histories with survivors, and got it all down.

Her book made Stockton the historical example of a community’s Asian American assimilation, and how despite the racism, the genes could not be denied.

There was a “Filipino there” there— thriving in Stockton. And indeed, it was a study worth noting, no less than Jamestown.

That’s how important Dawn Mabalon is to Filipinos in America and to whomever is interested in the historical truth about us. She did the legwork, wrote the book. This is how it went down. It can’t be ignored.

For me Dawn was not just a friend, she was a news source, an historical muse.

She was also connected to so many different Asian American communities. Women, scholars, teachers, foodies, historians. And as social media spread the news to different networks, I’m sure this was a moment repeated everywhere.

I got the word from another dear friend, Theo Gonsalves, president of the Association for Asian American Studies. “Did you hear?” read his text.

When he told me, it was like being gut-punched. I was bent over with sadness.

Over the years, we often discussed in person and on social media the relative fortunes of the San Francisco Giants, the virtues of cronuts, and how I prayed for the soul of her dad every day. (He’s in my prayers. Maybe you are too?)

Dawn’s father was at times an even better source than Dawn. Ernie Mabalon was a Filipino guerrilla, who answered the call of FDR at the start of WWII to serve alongside MacArthur’s troops. As a young teenager in the Philippines, he fought in the jungles and went on intel missions.

Maybe that’s where Dawn got her spunk.

Ernie was one of the Filipinos impacted by the Rescission Act that denied benefits for their service. This year, when all Filipino WWII vets won a Congressional Gold Medal, Ernie got his posthumously.

So, Ernie was always my connection to Dawn, whom I saw as a super-intelligent younger sister. She was doing the work. She did it well. If I needed confirmation of a fact, she was there to let me know the historical detail.

A community needs someone like that–someone, as they say in journalism, who “knows where all the bodies are buried.”

These are the people you know you can trust because they’ve done the work.

And when we’re at a loss, they have our back. They were always there for us. Always. Excellently.

I saw her in Chicago a month ago at the Filipino American Historical Society convention. Dawn was the promise of FANHS. No longer a group of armchair amateur historians, it was now a mix of real academics who took a back seat to no one in the academy. Dawn was a new generation, and she was inspiring even younger people behind her.

“They were empowered by her example,” her Little Manila co-founder Dillon Delvo told me. “She inspired all these kids to go to college intentionally to discover their Filipino stories and identities.”

When I saw her at the convention hotel, we went through our ritual. I mentioned how much I revered her dad. She mentioned how she was sorry she missed seeing my show this time and the last time.

She said something disgruntled about something. (The Putin-Trump Summit? The Giants? It was something. Had it been today, I’m sure she would have said some smart and snarky thing to say about the anniversary of Trump’s Charlottesville remarks. Dawn had no shortage of opinions!) It’s the way two busy people on a mission communicate when they are too busy. But we were linked by the past, our personal history and common goals, advancing our Filipinoness in our own ways. We both respected that. She gave me the respect of an elder. I respected her youthful energy and smarts. And the legacy she was yet to create.
She had so much left to give us. Dawn was working on the definitive Larry Itliong story; had a children’s book coming out on Itliong; and was scheduled to do an upcoming talk in D.C. on Filipino Americans and civil rights. Ah, that means a visit to Tom Cunanan’s super gourmet Filipino hole in the wall, Bad Saint!

We promised to catch up in California if we didn’t see each other during the conference. And then we gave each other a big hug.

For the last time.

Dawn Mabalon was a ball of fire.

And now in the sad darkness, we realize just how much we’ve lost.

Emil Guillermo is a journalist and commentator. He write a column for Inquirer.net  Reach him at www.amok.com.  His one-man show, “Amok Monologues” is the how American Filipino history impacted his life. See it here: