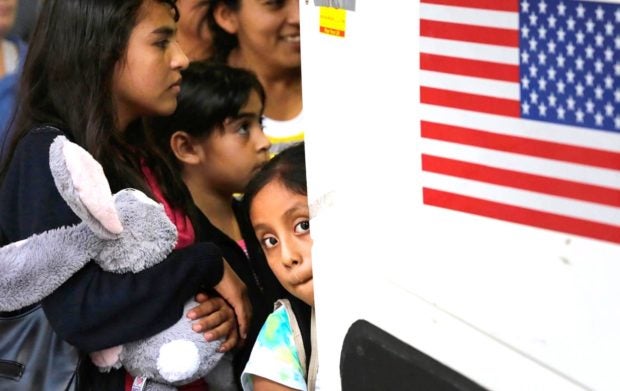 Immigrants from El Salvador and Guatemala board a bus following their release from a family detention center in San Antonio, Texas. AP PHOTO

WASHINGTON, D.C.—A new report on family detention released Thursday by the American Immigration Council says the US practice of detaining asylum-seeking families is damaging to a fair court process.

The report, “Detaining Families: A Study of Asylum Adjudication in Family Detention,” based on more than 15 years of family detention data concludes that the federal government’s decision to detain parents and young children is misguided.
The report draws on government data from 18,000 immigration court proceedings held between 2001 to 2016 and documents how families detained in five family detention centers proceeded through court and what obstacles they faced in pursuing their claims for protection.

As government officials and policymakers weigh the potential expansion of family detention, the report finds that detained families face significant barriers to seeking asylum and routinely go to court without legal representation. Data also shows that immigration courts have a vital, independent role in maintaining due process for asylum seekers held in detention. The findings further demonstrate that the government has used detention excessively and unnecessarily.

The main findings of the report include:

“The practice of detaining families has existed in the United States for years, yet until now there was no data-driven information about how families who are detained go through the immigration court process,” said Ingrid Eagly, professor at UCLA School of Law.

“The 15 years of data presented in this report strengthens the long-standing critiques that detaining asylum-seeking families is unnecessary, costly, and inhumane.”

“After reviewing 15 years of government data, it is clear that detained family members—despite barriers in their access to justice—have viable claims for protection. They show up to court, too often without the aid of an attorney, and fight to keep their families safe,” said report author Steven Shafer, supervising attorney of released youth for Esperanza Immigrant Rights Project in Los Angeles.

“This study demonstrates just how challenging it is for families detained in remote locations to secure the legal counsel they need to effectively make their case. Now is a critical moment to shed light on the shameful practice of locking up vulnerable and traumatized asylum-seeking immigrant families,” said Royce Bernstein Murray, policy director at the American Immigration Council.

“There are alternatives to detention that are more humane, less costly, and equally effective. This report makes clear that families released on these alternatives have a much stronger chance at a fair day in court,” Murray added.