Fiesta in America: ’20 years is worth celebrating’ 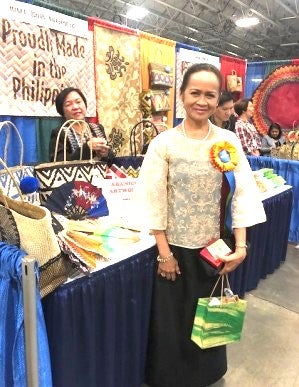 NEW YORK — Three generations of the Policarpio family came all the way from Ossining in Upstate New York, and they came early: Eli Policarpio, his mother Leonila, and his 6-year-old son Ezar. There was a threatening thunderstorm, and the family arrived before noon because they wanted to be home before the downpour.

Ossining is about an hour’s drive to Secaucus, New Jersey, where the annual Fiesta in America opened on August 11.

“It’s our first time,” said Eli, speaking to The FilAm as the three walked lazily around the sprawling Meadowlands Expo Center, checking out booths and what each of them offered. Ezar was getting impatient. He wanted his father and grandma to do some shopping so he could put stuff inside his Walmart bag.

“I want to my son to experience what a Philippine fiesta is,” said Eli. “That’s why we’re here.” 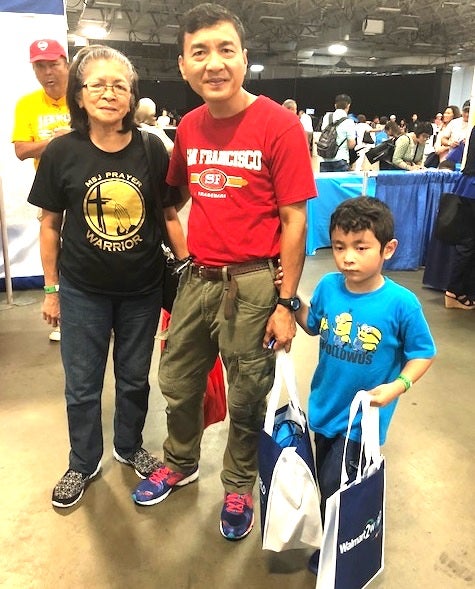 The Policarpio family from Ossining: Leonila, her son, Eli, and grandson, Ezar. THE FILAM

Fiesta in America, the longest running cultural and trade expo in New Jersey, is vastly different from the typical Filipino barrio fiesta Eli presumably wanted to introduce to his U.S.-born son. For some Filipino Americans, this is the closest they’ll ever get to the real one.

This Fiesta was held indoor at a convention center, while the traditional fiesta usually occupies several blocks of streets with the aroma of roasted pig inviting a warm welcome to neighbors and strangers alike. But both the Jersey Fiesta and the fiesta back home evoke the same lively celebration and the spirit of closeness and camaraderie. There is food and entertainment to make the memories linger. Ezar walked wide-eyed, marveling at everything around him. 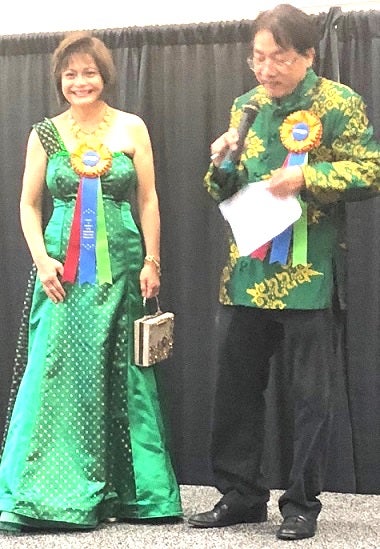 “When we started Fiesta 20 years ago,” recalled Fiesta President Fernando ‘Nanding’ Mendez, “we did not foresee that Fiesta would be recognized as the biggest trade expo and cultural show of its kind on the East Coast.”

A graphic designer, Nanding and his wife, Mila, began Philippine Fiesta in 1998, an idea that lodged in their minds after years of traveling and observing international expos held around the world.

Mila passed away in 2012, leaving Nanding almost singlehandedly to continue what they started. Legions of friends and volunteers urged him to keep the Fiesta legacy alive. Nanding thought he couldn’t fail the faithful followers who came year after year. For some of them, Fiesta served as a backdrop to an enduring romance.

“Later, said Nanding “we will meet some of the people who met at Fiesta and got married.”

This year, Nanding and his life partner, nurse educator Laura Garcia, welcomed guests – led by Secaucus Mayor Michael Gonnelli and Philippine Consul General in New York Claro Cristobal — to Fiesta’s 20th year. Both of them were dressed in emerald green, a color that stands for rebirth and royalty.

Inside the convention center were several dozen booths and tables offering a wide array of products and services — free massage, condominium properties in the Philippines, handicrafts, T-shirts, lessons on martial arts, financial planning services, and many more. Philippine Airlines had a booth to promote its direct flight to Manila. Walmart, Goya food products, and AARP were prominent in their presence. 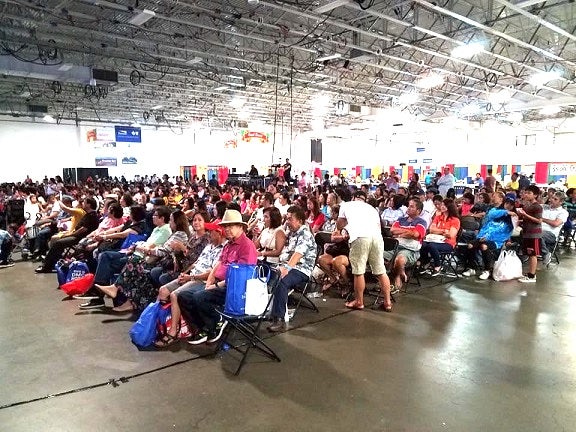 Crowd waits for the musical program to begin. JULIET ASTORIA

There was a musical program in the evening, and that’s when the convention crowd began to swell. Sixties pop band Gary Lewis & the Playboys (“Save Your Heart for Me,” “Who Wants to Buy This Diamond Ring”) sang their old songs before a crowd that still recognized the clean-cut boys behind the grizzled music veterans. Filipino Ogie Alcasid sang the ballads that made the ladies swoon.

For 20 years, Fiesta has created an experience where Filipinos can do business, have some fun, and feel good about doing both. “Twenty years is something to be celebrated,” said Secaucus Mayor Gonnelli. “Thank you for calling Secaucus your home.”