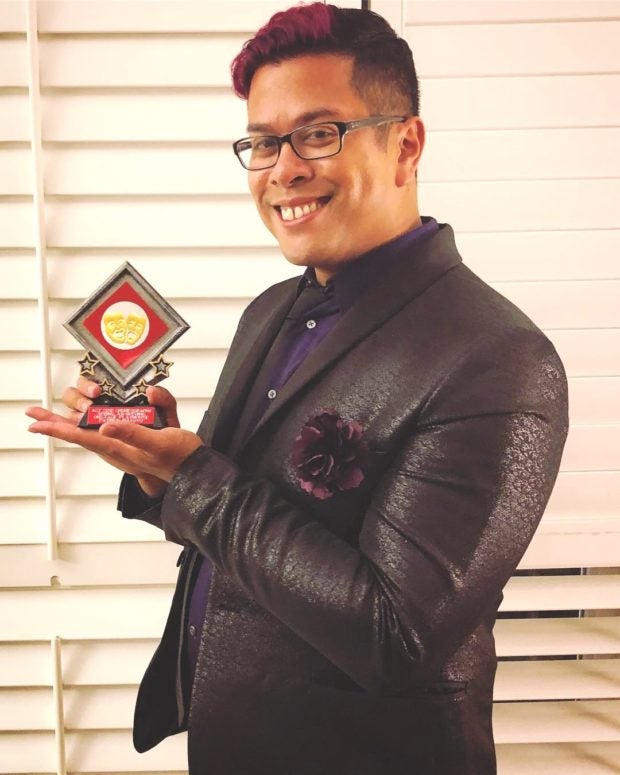 The 53rd installment of the awards, presented by the San Diego Association of Community Theaters, celebrate the actors, designers, and production teams who contributed to the 2017-18 season. The ceremony was held at The Dana-Mission Bay Hotel.

“I was so happy to even be nominated,” says Mayuyu.

“When they said my name that night, all of my ‘Spring Awakening’ family stood up from the table so fast and screamed so loud!

“It was a very exciting and proud moment for me and the rest of the cast and crew who worked so hard on such a special and meaningful production.”

Included in the production was Filipino American actor Peter Armado. “He was awesome to work with!” Mayuyu says.

“Afterwards, some of us went to our director’s hotel room where we had a pizza party and a bottle of Moscato.”

Born and raised in San Diego, Mayuyu joined a production of “Peter Rabbit” in second grade and “I’ve been hooked ever since,” he says, laughing. “But I really got involved in theater starting with my high school drama club. I took our high school theater program really seriously and wanted to keep entertaining people and make new friends and tell stories.” 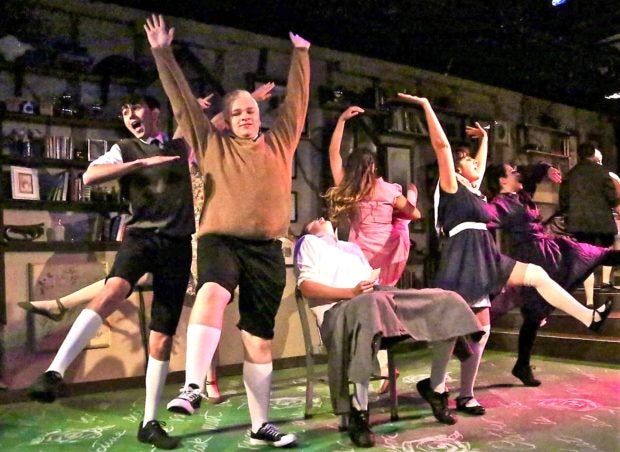 A scene from one of Onstage Playhouse’s 2017 staging of “Spring Awakening” with choreography by Patrick Mayuyu. FACEBOOK

“That’s where I met my favorite teachers, Laura Preble and Marilynn Zeljeznjak, as well as my best friend Kym Pappas, who I now make theater with. They all inspired me to pursue a life in the arts.”

He also joined the Thespian Society and spent his youth attending its annual festivals and workshops. “I would meet other kids from all over who were as enthusiastic about theater as I was.”

On top of his choreography and acting, Mayuyu is a cofounder of San Diego-based Filipino American theater company MaArte Theatre Collective.

“On occasion, I also choreograph for the San Diego State University Color Guard, where I’m also a performance consultant.”

The Tony Award-winning musical features music by Duncan Sheik and is based on the play by Frank Wedekind about teenagers grappling with their blossoming sexualities. The original Broadway cast included Jonathan Groff (“Hamilton,” Kristoff in the Disney film “Frozen”), Lea Michele (TV series “Glee”) and Skylar Astin (film “Pitch Perfect”). 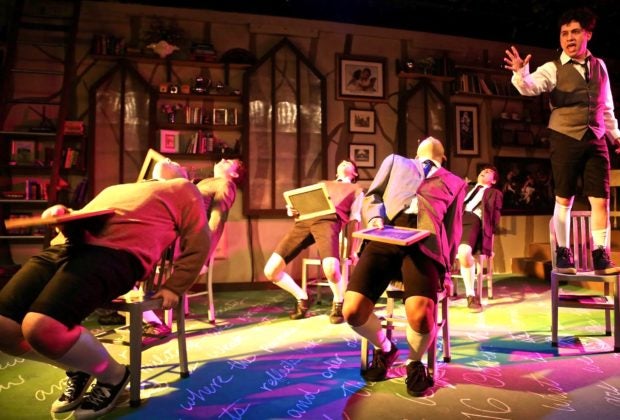 “I’m a huge fan of the show,” says Mayuyu. “I jumped at the chance and we just started exchanging all these ideas we had for the show.”

“I’ve probably seen it more than 10 times and have been inspired every time, so I knew the story and it’s music pretty well.”

Nevertheless, approaching the material as a choreographer, he still had to prepare by analyzing the musical.

He collaborated with Brown to stay on track with the staging’s objectives. “I had plenty of conversations with Teri to make sure we were on the same page. It was a wonderful collaboration. She gave me a lot of room to play and is such a cheerleader.”

“I always ask myself, ‘What am I trying to say?’ and go from there. A lot of the work is created in the space with the actors, which is how I like to ‘paint the picture’ as we build a piece from scratch while also making sure the movement feels comfortable in everyone’s bodies,” he says.

“Every single soul in this cast told their character’s story in their own beautiful way. It was a dream to watch them grow and pour their guts out on that stage every night.”

Mayuyu is currently working on the choreography of “Revolt. She Said. Revolt Again.” for InnerMission Productions. The production is an experimental work that deals with language, relationships, work, and life, opening on Sept. 15. He will also be playing the role of Frank in Sarah Ruhl’s “Melancholy Play,” also at InnerMission in November.

“In February 2019, I’ll be in the world premiere of ‘The Hour of Great Mercy’ by Miranda Rose Hall, directed by Rosina Reynolds at Diversionary Theatre.”

“MaArte Theatre Collective is currently working to produce a piece written by a San Diego local Filipino American playwright. Be on the lookout for details later this year!”