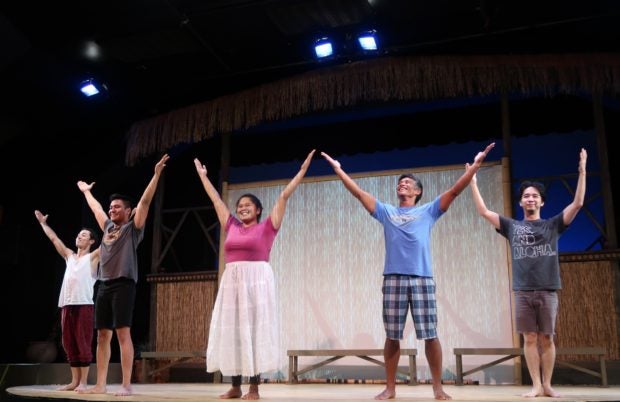 HONOLULU — It has been almost ten years since the Honolulu Theatre for Youth has performed a play about Filipino culture. Now, kicking off its 64th season with the theme “Our Stories,” the local theater presents Filipino Folktales & Fables, a story created and directed by Alvin Chan, a former company actor for eight years.

“We really wanted to do a Filipino piece and reach out to that group that is so prevalent in Hawaii culture and really showcase stories from the Philippines versus New Age, modern day stories,” the director Chan explained.

Chan took time in researching whatever he could find on Filipino folktales, fairy tales, and fables to obtain dramaturgical data on Filipino stories for children. He came across a book written by one of the first missionaries, who collected indigenous stories from all over the Philippines. With a book of over 50 short stories, Chan discovered Filipino folktales and fables that brought inspiration to his play, including how the Philippine islands were created and characters such as the infamous snake called Bakunawa.

“The Filipino take on all these stories were made for great drama. Reading these stories, I thought how amazing it would be on stage,” Chan explained.

He dove into his research more and decided to create one big play out of the many stories he found. Realizing that these stories came from different parts of the Philippines, Chan incorporated corresponding languages into the play, including Bisaya, Ilocano, and Tagalog to add more diversity for the children. The director even included folk dances and songs, inviting Professor Wayne Mendoza from the University of Hawaii and Gabriel Torno of Tekniqlingz to help with choreography. “It was amazing to see the community come together for this show,” the director stated, reflecting on the help the theatre received when putting together the show.

Filipino Folktales & Fablesshowcases enchanting stories from all over the Philippines. From the origins of the rainbow and how the Philippines became an archipelago, to a fable about disobedient children, audience members of all ages will come to appreciate the Filipino culture more.

“I really like the story about Bulan and Haliyaand the lunar eclipses because it shows women in a very strong and heroic sense,” company actress Maki‘ilei Ishihara noted. “I think it’s very important for younger, Filipino women growing up to have those role models and to also be proud of their heritage and where they come from.”

“It’s so important for me to be telling this story because it’s my story, it’s what I grew up with,” Quinto began. “I remember hearing these stories growing up in the Philippines and what better way to perform this piece than with other Filipinos and with those who love Filipino culture.”

Most of the actors shared the common experience of not knowing much about their Filipino heritage and wishing they had watched a play like Filipino Folktales & Fables to obtain a deeper understanding of the culture. The hour-long play provides a quick overview of Filipino culture, with a glimpse of its diversity, represented by stories, songs, dances, and languages from all three regions.

“It’s important for other Filipino kids to see stuff like this because I never grew up with this. This is an avenue to open a door to their own culture. Hopefully this will open a door for kids for more questions and start a conversation with their parents,” Tesoro said.

The cast members hope that this show will bring a deeper appreciation for Filipinos and help them forget about the stereotypes and misconceptions of them. Ishihara said the best way to battle intolerance is through education and outreach. She believes that the theater offers a great venue to do this for people because they come expecting a show but leave with so much more.

“This is an important show for Filipino culture, kids, and families but also it’s for everybody because learning and taking the time to appreciate one culture and a group of people helps us appreciate all the cultures and people. It’s a diverse theater for diverse audiences,” Mazzella added. Performance of the story of Bulan and Haliya. INQUIRER/Lalaine Ignao

Outside of wanting to provide Filipino cultural awareness to the local community, the cast members aspire to gain more theatregoers at the Honolulu Theatre for Youth. While many people on the island have visited the theater as children, it has become the theatre’s main concern to attract them into coming back as adults. Many have a misconception that these shows are just for kids, but when adults come to see the show, they become enamored. As Choo shared, people do not have to visit the theater regularly to enjoy shows because these shows are a reflection of the Oahu community. Every voice is heard at this theater as the artistic director,Eric Johnson constantly makes an effort that they have a story for everyone, making sure every group in Hawaii is being represented.

“The theater is a wonderful place to reflect, to enjoy, and it’s a celebration to understand the human experience,” Choo added.

“HTY is not necessarily children theater, but more like family theater. So we make theater with kids in mind so there’s nothing R rated, but it’s still meant for everybody,” Mazzella stated.

Filipino Folktales & Fables is now available for students in local schools; the show opens to the public on Friday, August 24th at 7:00 p.m. and will continue running on Saturdays until September 22nd. The performances will take place at Tenney Theatre on the grounds of the Cathedral of St. Andrew. Tickets are available for order online at www.htyweb.orgor over the phone at (808) 839-9885 ext 720.