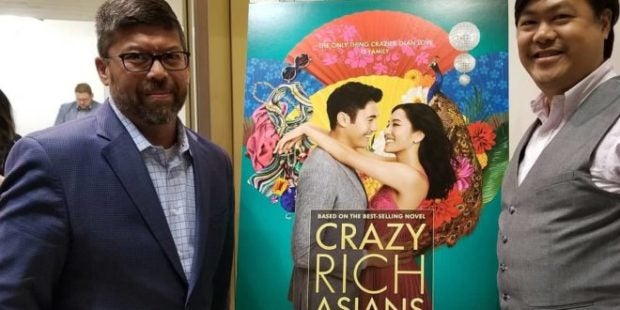 WASHINGTON, DC – After sold-out sneak previews across the country, including here in Metro DC, Filipino American leaders are urging community members to see this “incredible,” romantic, and funny movie about a crazy Asian family. But more importantly, a strong showing at movie theaters, they assert, will show Hollywood the power of Asian Americans in this country’s entertainment industry. Not only as consumers but also as performers and producers.

“Such a great movie – visually stunning and a unique take on many tropes that could potentially be overdone: rom com; inter-generational conflict; cultural conflicts,” says Ben de Guzman, a communications specialist and a policy director at DC Mayor Muriel Bowser’s office.  He went to an advanced screening at the National Archives on August 8 with lawyer Hector Vargas.

“It’s funny, heartwarming, and I recommended it unflinchingly,” adds Irene Bueno, a political consultant and accomplished ballroom dancer. “It was a great movie – there was drama, comedy and romance! You don’t need to be Asian to enjoy this film, so go to a theater near you and see it.”

The movie, based on the worldwide bestseller by Kevin Kwan, opens in area theaters on Wednesday, August 15.

The story follows New Yorker Rachel Chu (Constance Wu) as she accompanies her longtime boyfriend, Nick Young (Henry Golding), to his best friend’s wedding in Singapore.  Excited about visiting Asia for the first time but nervous about meeting Nick’s family, Rachel is unprepared to learn that Nick has neglected to mention a few key details about his life.  Not only is he the scion of one of the country’s wealthiest families, but also one of its most sought-after bachelors.  Being on Nick’s arm puts a target on Rachel’s back, with jealous socialites and, worse, Nick’s own disapproving mother (Michelle Yeoh) taking aim.

It soon becomes clear that the only thing crazier than love is family, in this funny and romantic story sure to ring true for audiences everywhere.

“Crazy Rich Asians” features an international cast of stars. Kris Aquino has a small but fun part. The movie was filmed entirely on location in Singapore and Malaysia.

Eliza Romero of Baltimore, Maryland —  activist, blogger and founder of Aesthetic Distance — posted this comment on the Aesthetic Distance Facebook page recently: “This is what’s good today. A super fun film that celebrates Asianness without talking about oppression has a 100% fresh rating. It is not a dismissal of real issues to celebrate your awesomeness regularly. They can, and should, coexist.

“We need people building up culture as well as people fighting for our right to exist. We have an imbalance because honestly, it’s easier to sit back and criticize, even if it’s righteous, than to do the hard work to create something new and exciting.

There is unanimous agreement that this will be the first step towards Asian movies with Asian values showing up at Hollywood. To movie buff Richard Anthony Tagle of Washington, D.C, “It is very seldom to see a Hollywood-backed film feature Asian Americans in the lead. But I am not hungry for the presence of Asians on the big screen since I love watching Filipino, Japanese, Korean, Indian, and Chinese films. Filipino comedies, Korean horror, Japanese rom coms, Bollywood musicals, Chinese action films. When you act globally, the world offers a very wide perspective. I’ll applaud Hollywood when it features Harry Shum as the new lead in Mission Impossible, or Daniel Kim as the lead on an Oceans 11 remake. When the movie doesn’t have to be Asian themed to star an Asian actor. I mean – yeah, Julia Roberts could have fallen for Ken Watanabe as a tycoon staying at a penthouse suite in Beverly Hills.”

The release of “Crazy Rich Asians” is hailed as another history in the making. On February 2015, Eddie Huang’s best-selling memoir, “Fresh Off the Boat,” became a popular TV sit-com. It was the first network TV show in over 20 years to center an Asian American story. Now heading into its fifth season, it is the first network show starring Asian Americans to reach syndication.

“Fresh Off the Boat” takes a humorous look at the lives of immigrants in America. In the 1990s, Eddie, a hip-hop-loving 11-year-old, relocates with his parents and two brothers to suburban Orlando from the Chinatown section of Washington, D.C. As Eddie’s dad, Louis, pursues the American dream by opening a Western-themed restaurant named Cattleman’s Ranch Steakhouse, Eddie and the rest of the family try to acclimate to their new, strange surroundings.

Movie critic Ava DuVernay, in her review of “Crazy Rich Asians,” says that Asian Americans “can be the heroes of their own stories … We all have a story. Immigrant stories are the stories of dreams, of love, of sacrifice, of courage, of honor. They are truly what make America great.”