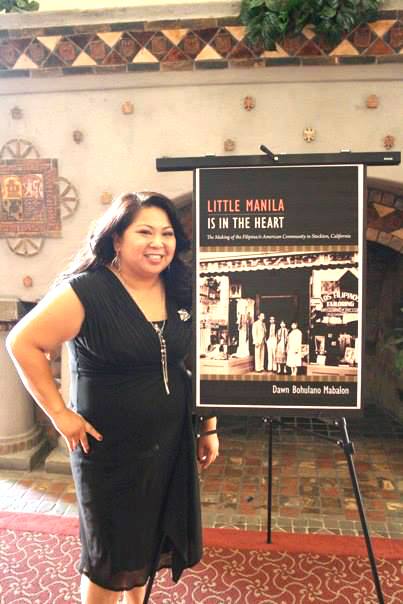 Dawn Bohulano Mabalon, a tenured professor and scholar at San Francisco State University, who wrote passionately for the inclusion of the Filipino story in American History, and fought for the preservation of her hometown community’s soul as a co-founder of the Stockton’s Little Manila Foundation, died on Friday.

The cause of her death was not immediately known, but friends of the family said there was an apparent accident during a snorkeling outing while she was vacationing with her family on Kauai.

Mabalon was known to have a number of health issues, including asthma. A source close to the family said paramedics were called to assist, but they were unable to revive her.

The news spread quickly throughout the Filipino American community nationwide.

“I’m devastated,” said Dillon Delvo, a co-founder of the Little Manila Foundation with Mabalon, his childhood friend and colleague. “Hard to think how we’re going to do stuff we want to do without her.”

Delvo reconnected with Mabalon 19 years ago while at the Stockton Barrio Fiesta. “It was her idea to create and preserve Little Manila in Stockton as an historical district,” said Delvo. “In my heart, I said there’s no way we could beat the developers. But I was wrong.”

At the Barrio Fiesta in Stockton this weekend, Delvo held back tears as he announced to a gasping crowd that Mabalon had died.

“This is a great loss for all of us, as she gave the world to her family, friends, and our community,” said Allyson Tintangco-Cubales, a close colleague and fellow professor at San Francisco State University, in a Facebook post.

Mabalon did give her readers, a vivid and comprehensive representation of post-colonial Filipino life in the U.S. in her book, “Little Manila is in the Heart: The Making of the Filipina/o American Community in Stockton, California.”

Saving Stockton’s Little Manila may have served Mabalon’s sense of activism. But her writing about the place put the area’s blighted blocks into a historical context.

“So many people have found so much inspiration, so much identity through her work,” said Delvo, who added that young Filipino Americans, especially women, were inspired to go to college and study their history because of Mabalon. “Her work empowered so many thousands of us. Her loss leaves such a gaping hole for all Filipino Americans right now.” Mabalon’s book, published in 2013, remains a scholarly but accessible history that uses personal accounts, oral histories, and ethnic journalism to document the evolution of the Filipino American experience soon after the Philippines became the first colony of the U.S. in 1898.

As the first wave of Filipino colonized nationals came to the U.S., most found their way to Stockton where they fanned out to work the fields of the state’s Central Valley.

Mabalon further developed her academic niche by focusing on the role of the Filipino in the American labor movement, and specifically on the life of Larry Itliong, the forgotten Filipino unionist who led the Delano Grape Strike in 1965, though Cesar Chavez is more widely credited with that role. Three years ago, Mabalon began research on a definitive book on Itliong that she continued to work on. She had finished a soon to be released children’s book on Itliong.

Mabalon was also deeply involved in writing about Filipino history and culture through its food, and was part of a growing network of “Filipino foodies.” One of her favorite eateries was Bad Saint, an award-winning Filipino inspired restaurant in Washington, DC where she visited often. She had an upcoming talk at the U.S. Civil Rights Commission on Filipino Americans and civil rights.

Born on the south side of Stockton, California to immigrants from the Philippines, Mabalon’s late father Ernie was a Filipino guerilla during WWII. He answered the call of Roosevelt to fight alongside American forces, then spent most of his life afterwards fighting for the benefits that were rescinded in 1946. This year, Mabalon’s father posthumously received the Congressional Medal of Honor, along with other Filipino veterans of WWII.

After graduating from Edison High School in Stockton, Dawn Mabalon went to San Joaquin Delta college, and for a while considered journalism as an intern for the local newspaper the Stockton Record.

Her friend Delvo chastised her when he saw the journalism she was doing. “Why aren’t you writing stories about your people?” Delvo, then a woke San Francisco State student, said to her.

Dawn Mabalon took it to heart and went to UCLA, then Stanford for her Ph.D., and when they saw each other again, they formed an unbeatable working relationship that resulted in the preservation of the Little Manila Historical District in Stockton.

“She was the one who initiated all this stuff,”Delvo said. “She gave us academic cred. But she was still Dawn from South Stockton, end of the day.”