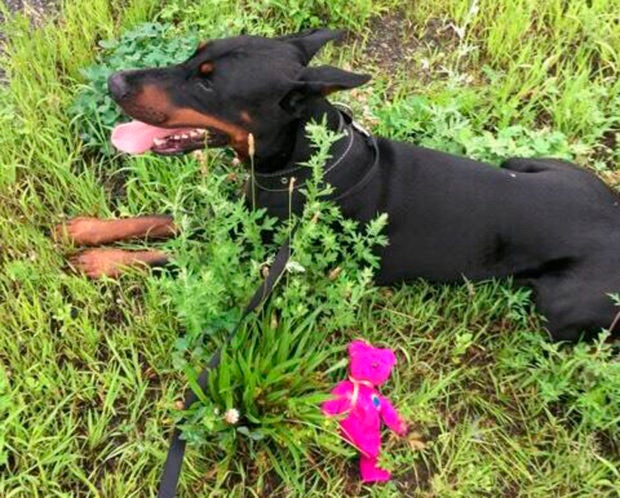 In this image provided by the Massachusetts State Police, a Doberman pinscher lies next to a stuffed teddy bear thrown to it by a state trooper in a successful effort to lure if off the highway, Sunday, Aug. 12, 2018, along Interstate 291 in Springfield, Mass. The dog has been returned, unharmed, to the owner, who lives near the highway. Image: Massachusetts State Police via AP

SPRINGFIELD, Mass. (AP) — A dog could not resist being lured away from a busy Massachusetts highway by a teddy bear.

The Massachusetts State Police got multiple calls of a dog dashing through traffic on Interstate 291 in Springfield on Sunday morning.

MassLive.com reports Trooper Corey Brown responded and saw a Doberman pinscher running down a lane. Brown grabbed a stuffed pink teddy bear from his cruiser. The dog loved it and grabbed it quickly, following commands to sit. The dog has been returned, unharmed, to the owner, who lives near the highway.

In May, a trooper in Worcester pulled a similar move by luring a dog off the highway with homemade deer jerky. CC