INQ: What would you have Duterte do with regards to the West Philippine Sea?

SAT: Let me just add to the earlier point. The anti-God statements of Duterte is a different issue altogether. We never had a president or commander-in-chief who is godless or anti-god. That’s clearly a deal breaker for a lot of Filipino citizens, as well as officers. To be mocked for your faith is something serious. 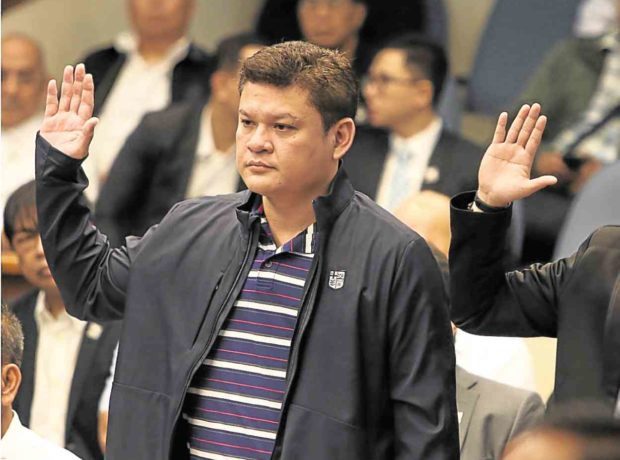 Now as regards what Duterte should have done, he should first strengthen our alliances with our strategic allies and regional allies, like the U.S., Australia, Japan, South Korea, then ASEAN. He should encourage the increase in the frequency of freedom of navigation patrols by these countries in the West Philippine Sea region. He should call for a regional summit, to raise the awareness of the international community as regards what’s happening in this particular area of the world. Finally, he should fast-track the ratification of EDCA [Enhanced Defense Cooperation Agreement] and the AFP modernization. These are just some of the measures that can at least offset the moves of China.

INQ: On Duterte’s alleged secretive bank accounts, you had charged that he had as much as two billion pesos. When you challenged him, nothing came of that. Has there been any movement since in terms of that issue?

SAT: Unfortunately, there has been no movement because when I filed the case of plunder with the Office of the Ombudsman, and included documents as part of the evidence, the Ombudsman pursued the case but they were stonewalled by the current AMLAC leadership [Anti-Money Laundering Council], appointed by Duterte, saying they won’t give the investigative report to the Ombudsman because supposedly the president is an unimpeachable officer but they don’t have any business doing that. The president is immune from suit, but it doesn’t mean he cannot be investigated. He canbe investigated and the basis of that investigation, the results, can be used as a basis for impeachment. But since Duterte’s appointee is effectively covering up for Duterte, the Ombudsman cannot move ahead without those documents.

INQ: Of course, he’s said that you yourself have bank accounts where you stashed away money.

SAT: I’ve already signed waivers and I went beyond that by actually going to the specific bank he mentions and together with the media—they witnessed that such accounts did not exist.

INQ: In relation to the EJKs [extrajudicial killings] and the drug war, every country has a drug problem, perhaps it’s an issue in Manila, but it has never been an issue as in, say, Colombia or Mexico, where it threatens the very fabric of society. Now you have been implying that Duterte’s son is a key figure in drug smuggling in Davao …

SAT: And Duterte himself.

INQ: And Duterte himself. Do you have proof of that?

SAT: During the investigation, in relation to the seizure of P6.4 billion [worth of] shabu, the major players were all linked to Paolo Duterte [the president’s son]. Look at Mr. Duterte. For all his rhetoric on his war on drugs, his supposed personal crusade against illegal drugs, what did he do in this case? He didn’t even utter a single word. Worse, the prosecutor who dismissed the cases against these players was promoted to judge by Mr. Duterte. Right now, the only person who was charged in relation to this case was the warehouse guy. It’s a fake war on drugs.

And I agree that the drug problem in the Philippines is nowhere near the magnitude in Colombia and Mexico. The global average of the population exposed to illegal drugs is around 5%. In the Philippines it’s only 1.8%, and of that only .1% of the population are drug dependent. Most are occasional users, or marijuana users. So what Duterte did strikes a chord in the hearts of Filipinos, especially the parents. That’s why he created a demand for the brand of governance that he represented, because he didn’t know anything else, he couldn’t fashion himself as the guy who would turn around the economy and eradicate poverty. But the problem is, he was so good lying with a straight face that people bought into that. 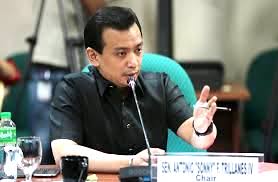 INQ: What about his current popularity? One survey says he’s down and the other one is saying it’s still up. Are those surveys to be trusted? Does Magdalo [his political party] conduct its own surveys?

SAT: Yes, we do. I’ve pointed out the flaws in the Pulse Asia survey. According to their results, Duterte had an approval rating of 99% in Mindanao. That’s statistically improbable! 1% was undecided. He got 0% disapproval rating in Mindanao. I am questioning not only the validity of their results but also the integrity of the Pulse Asia Survey. They outsource their fieldwork.

INQ: They don’t have their own [interviewers]?

SAT: They don’t have their own, that is why they are being fed garbage. Garbage in, garbage out. And this is not the first time that they’ve missed. Back in 2007, two weeks before the elections, they had me at number 20, and that’s basically saying, game over, you’re not going to win, but I did win. I ended up number 11, despite the fact that we were cheated in some provinces. In Maguindanao, I got zero.

INQ: Who funds Pulse Asia? Is it different from Social Weather Station?

SAT: Theoretically they operate the same way. But how come the results are very different? Basically, Pulse Asia is saying that, well, we conducted our survey before the anti-God statements. Even so, you have these things happening already, around that time, so you can’t expect Duterte to go even higher.

There’s another element. We do our own surveys, we not only validate or invalidate these surveys by Pulse Asia, but we also have our own feedback mechanism, because when the research teams went back, the initial question of almost all the respondents was, “Are you from government?” Baka ma-tokhang ka. [One could get rubbed out.] So, there is that fear factor in their answers.

INQ: As an officer in the Navy and as the principal figure in what has been labeled the Oakwood Mutiny [2003], you’re now a Senator, supposed to uphold the Constitution, looking back, would you have done then what you did? Do you regret it?

SAT: I’m the kind of person who doesn’t regret past actions. I’d rather learn from them, move on, and be a better person. I acknowledge that these experiences have contributed to who I am. The outcome may not have worked for me then. But I would like to believe that it made me a better person in so many aspects.

INQ: How has it made you a better politician?

SAT: I believe it made us more sensitive to the public pulse. We cannot always assume that what we see, what we feel, is what the ordinary Filipino sees and feels. That’s why we need to keep our ears to the ground.

INQ: If the rebellion had succeeded, what would have happened then?

INQ: You didn’t think of that then.

SAT: The level of naivete then was quite high.

INQ: Have you become not just more pragmatic but cynical in terms of the way Philippine politics operates?

SAT: No. On the contrary I’m being labeled as the “optimist” because I see a silver lining in every development, whether it’s a negative incident or neutral incident, I see potential, I see hope and my own election back in 2007 has given me reason to hope.

INQ: Were you surprised?

SAT: Most definitely. I couldn’t possibly attribute my victory to my skill in campaigning because we weren’t able to campaign.

INQ: You were in Ft. Bonifacio.

SAT: The people saw something. They carried us on their shoulders to victory. And that’s something that I keep looking back to.

INQ: There’s a parallel with then Senator Gringo Honasan? Were you thinking of that as well?

SAT: Definitely not. As I mentioned, we were expecting to win, we were expecting the people to go over to our side and then we would go back to the barracks. But then what happened was worse. We ended up being jailed and we weren’t able to campaign at all.

INQ: When you were planning this [coup], were other groups like Young Officers Union still around, the RAM [Reform the Armed Forces], were they still a force, or were they spent?

SAT: They’re not organized anymore. They have gone their separate ways. I can say we were influenced by past events, we were romanticizing certain figures but most of them fell short of expectations.

INQ: Are you in touch with Honasan?

SAT: Yes, he’s my upperclassman [PMA]. But we have charted our own political course that’s not necessarily the same as his.

INQ: This is your last term. Are you thinking of teaming up with VP Leni Robredo for the next presidential elections?

SAT: I would rather focus on the dangers that we face now. We may not have elections in 2019 and more so in 2022. Should we reach that point, I am going to rally people to support VP Robredo. There shouldn’t be any other division within the opposition, for we expect the administration to go separate ways because people like Sara Duterte, Peter Cayetano, Bongbong Marcos, Richard Gordon, Ping Lacson, Manny Pacquiao, would be running for the highest post.

INQ: What happens if Bongbong Marcos wins his bid to have the VP recount be in his favor?

SAT: That should be a red line. It’s really up to VP Leni now to consolidate the opposition to prevent that from happening.

INQ: Has your office been working with Robredo on certain issues?

SAT: Yes. We are working closely with the opposition coalition for the 2019 elections.

INQ: She has been excluded from any policy-making decisions by Duterte. How can she be effective, if that is the case? Have you been able to help in that regard?

SAT: We have encouraged her to take the lead in the opposition. The biggest impact of VP Leni is that she is the polar opposite of Duterte, so that every negative or evil thing that is happening in our country, you would look at Leni as the hope, the viable alternative.

INQ: If she offers you the VP spot, will you accept?

SAT: I am not looking that far ahead. I believe the country is in danger. We’d rather keep our eyes on the ball, which is here and now. At the proper time, we will go through the necessary decision-making process.

INQ: Thank you for your time, Senator.