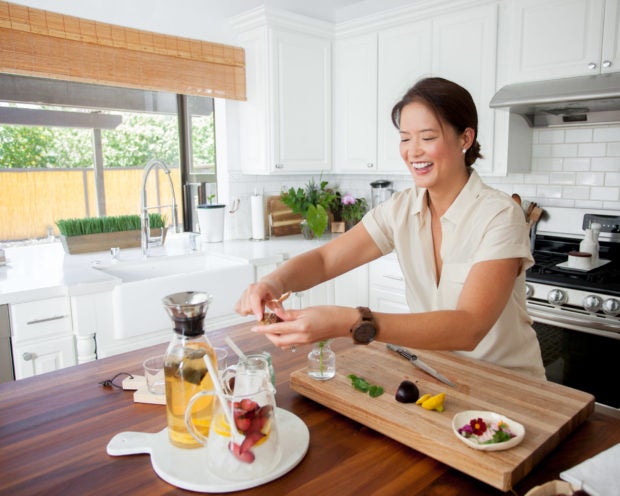 Rezel Kealoha happily at work in her kitchen. CONTRIBUTED

SAN FRANCISCO – About a year and a half ago, Rezel Kealoha held a nine-to-five job at a credit card company she had been with for years, but circumstances made her reinvent herself into a food stylist, food photographer, and recipe developer.

“My daughter was born two months premature. When that happened, I left my job altogether. I didn’t go back to the corporate world at all.”

She stayed home and focused on taking care of her daughter for a year, neglecting her own health and state of well-being in the process.

“I really didn’t think about what I was eating. I wasn’t exercising. I was diagnosed with high blood pressure and high cholesterol.”

Her doctor put her on a diet, and she started to eat healthier. Around the time, her father was diagnosed with diabetes. This prompted her to incorporate methods of eating a healthy diet in Filipino recipes that she and her father could eat.

“All the Filipino food that we still love to eat, we couldn’t eat it anymore. So I started with healthy recipes that I was learning how to make for myself and translate that into Filipino food so that both of us can still eat it with a little bit of tweaks.” 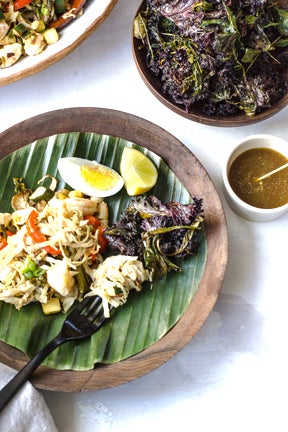 Born in Hawaii, where she spent the first four years of her life, Rezel has lived in three continents and five countries, which inspired her innovative and, at times, iconoclastic recipes.

“A lot of people call it fusion, but I don’t know how else to describe it. It’s just the food that I was exposed to, and I just mesh it together.”

After living in Hawaii, her family moved to the Philippines when her father was stationed in the U.S. Naval Base in Subic Bay. They lived in Olongapo City where her father, a native of Laguna, had first joined the Navy and where her parents first met through her mother’s sister who worked at the base.

“I basically grew up there.” 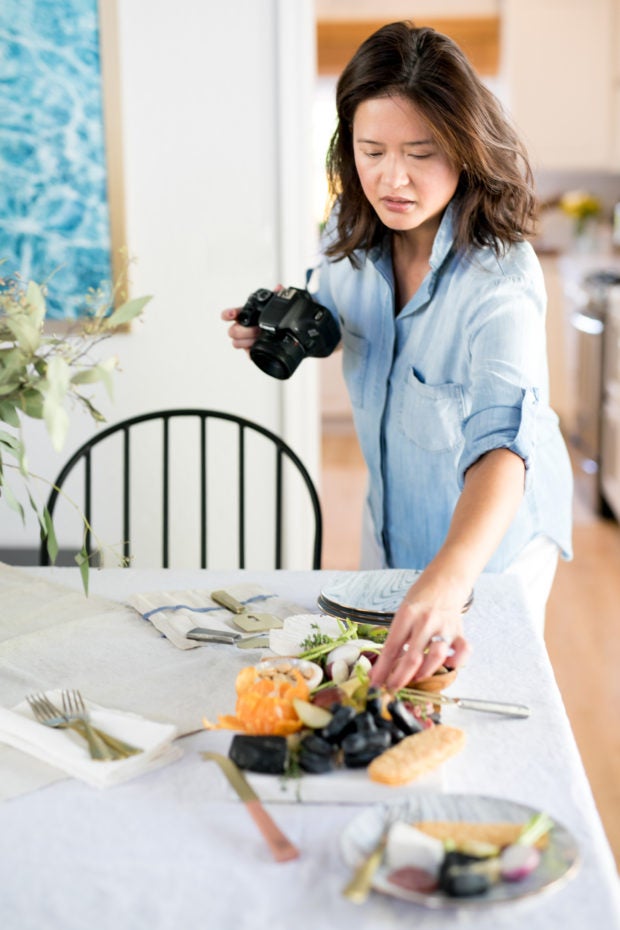 Rezel Kealoha at work as food stylist and photographer.

It was there that she spent a lot of time with her grandmother who loved to cook.

“They cooked everything from scratch. I just can’t imagine cooking the way they did.”

They stayed in the Philippines until she was 12 and her father was then stationed in Japan where she lived all through high school and until her father retired from the Navy. Her father decided to retire in Australia and they lived in Sydney for 11 years. She began her corporate career in a credit card company in Sydney and was then transferred to Singapore where she lived for six years. She ended up living in the Bay Area when she was transferred from Singapore to San Francisco in 2010.

Of all the cuisines that she has eaten abroad, Filipino food remains a favorite and will always be an integral part of her cooking and who she is. Filipino food staples such as lechon and lumpia are traditionally rich and greasy. Through alternative cooking methods and substitutions she has found ways of making “healthier Filipino food.”

“I found a way to boil the pork for a really long time and then I would bake it at a really high temperature so you still get the crispiness of the lechon but without the grease. I found a way to bake [lumpia] to get the same texture and fill it with vegetables.” 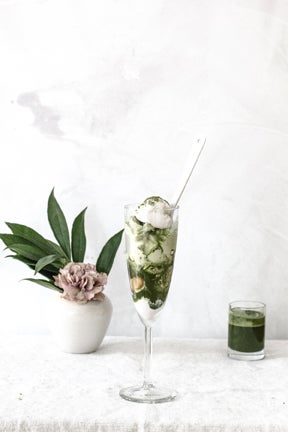 Quarterly, Rezel puts together a themed and by invitation only event at her home for people to experience her healthy and delicious recipes in an elegant setting. “It’s one of the ways I’m trying to bring the food out to a more general public.”

A recent one that she hosted was a “kamayan inspired event” that “brought a fresh take on how Filipino food is presented, to helpfully inspire those not familiar with the food to try it out or at least be inspired by the beauty of it.”

As a recipe developer, Rezel collaborates with different food and beverage brands. She gives as an example working with a brand of matcha, a Japanese green tea powder, where she developed a recipe for Matcha Palitaw, a twist on the traditional Filipino flat rice cake. She makes it with matcha drizzled with black sesame sauce, and a Japanese style parfait made with pandan syrup mixed with matcha.

Her foray into food styling and photography began as hobby of posting photos on Instagram of the food she ate as part of her healthy regimen. She had joined a fitness group where “you just post your workout and what you’re eating.” From there she became more seriously involved with food styling, presentation and photography. “People told me that I should start a blog, and I eventually did.” 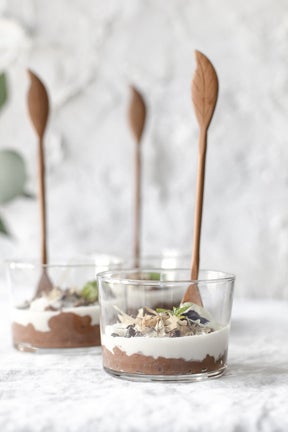 With all elements combined and the skills and talent to boot, her blog turned into a full-blown business where she now offers Social Content Production, Food and Product Photography, and Recipe Development as her services.

Rezel aspires “to get into studio food styling. Work for bigger brands, do something for TV, a TV campaign where you style the food for them. That’s my big goal that I’m working on this year.”

She also will be working with a few other brands towards the end of the year to create themed events featuring her recipes that will be open to the public. She also plans to look into recipe development and menu creation services for clients.

Filipino food has been perpetually on the culinary radar as the next big thing, and Rezel thinks, “It’s already there. There’s already exposure of Filipino food to the masses especially in New York, Los Angeles, and San Francisco. A lot of people that are not Filipino go to kamayan and pop-ups. The way I approach it is working with non-traditional Filipino brands and presenting them with Filipino recipes. They’re very receptive to it. That shows that it’s already happening.”

Rezel shares one of her favorite recipe creations, Healthy Champorado with Bonito Flakes,“as it meshes together something so Filipino with a Japanese ingredient.” This and other recipes can be found on her blog.

A healthy remix of a traditional Filipino breakfast cereal called Champorado becomes a dessert of steel cut oats and date syrup with a touch of umami from some bonito flakes.

To learn more about Rezel Kealoha, her recipes, and services, visit: www.rezelkealoha.com