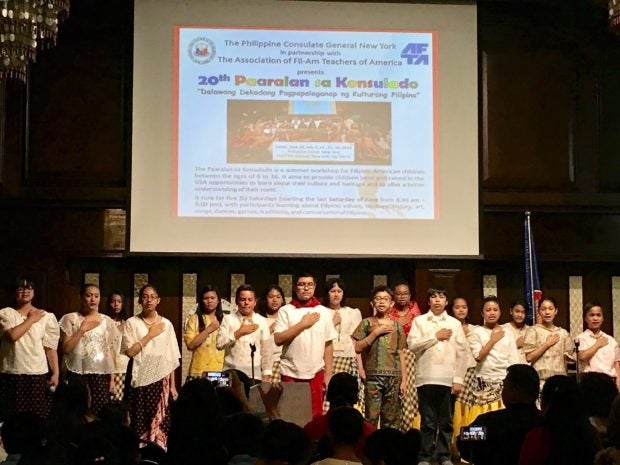 Filipino American children sing “Lupang Hinirang” and recite Panunumpa Sa Watawat during  the culminating activities of the 20thPaaralan Sa Konsulado held in cooperation with the Philippine Consulate General of New York and the volunteer teachers of Association of Fil-Am Teachers of America (AFTA) Inc.  INQUIRER/Carol Tanjutco

NEW YORK — A cultural immersion into the roots of their parents opened the eyes of American-born Filipino children, especially those coming from interracial families, after completing the five-Saturday intensive summer cultural “boot camp” at Philippine Center here.

Now on its 20thyear, PSK is jointly sponsored by the Philippine Consulate General of New York and the Association of Fil-Am Teachers of America, Inc (AFTA). Tiffany Amoncio (left), 14, and Juliete Petion, 11, are among the avid learners at PSK. INQUIRER/Carol Tanjutco

One of the new sessions included in recent years during the time of Remy Fe Cabactulan at the Philippine Mission, was on Table Manners and a gastronomic journey in Philippine food. Consul General, Claro S. Cristobal and his wife Marilou, hosted the Filipino lunch, which incorporated table etiquette in a formal setting. The younger participants were coached by Ave Pimo, while the bigger kids were assisted by the teenaged daughter of a French chef, Ella Hugo. Each table had an assigned adult teacher who reinforced dining etiquette.

Tiffany Amoncio, 14 years old, explained, “I wanted to learn more about Tagalog and to learn the Filipino culture. I am proud to be a Filipino! A lot of people in my school do not know where the Philippines is, so I tell them it is in Asia.”

A children’s favorite session is about games. Amoncio loved the game which she calls “goma” or rubber band intertwined, “sungka,” and “luksong tinik,” or jumping over layers of fingers. Her younger sister also went to PSK a long time ago. Her interest in learning Tagalog had her going to YouTube. 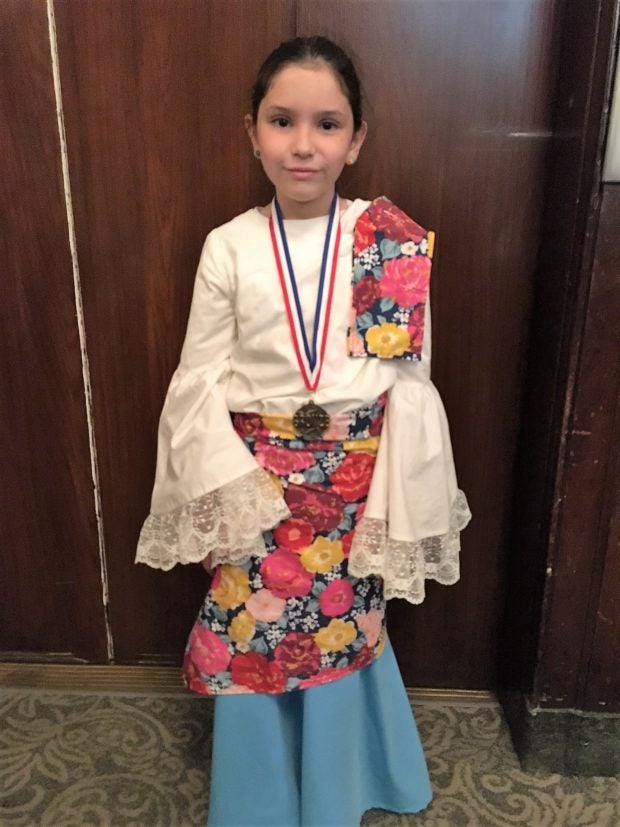 Juliete Petion, 11, is on her second year at PSK. She has a younger brother, Ben, also enrolled. “I miss the community. I like dancing and the Filipino traditional dance called crab dance,” she said. Juliete traveled to the Philippines twice. She goes to Montessori School at Jamaica, Queens. She won the essay competition this year.

Sinead Maloy, 9 years old, loves music and art. Her father is Irish, so only mom and grandma speak Tagalog at home. During the culminating event last July 28t, she received a special award for her art work. Another family expressed much appreciation; Paolo Calvacca, came with his Italian father Joseph, and mom, Pamela. They promised to come back next year. 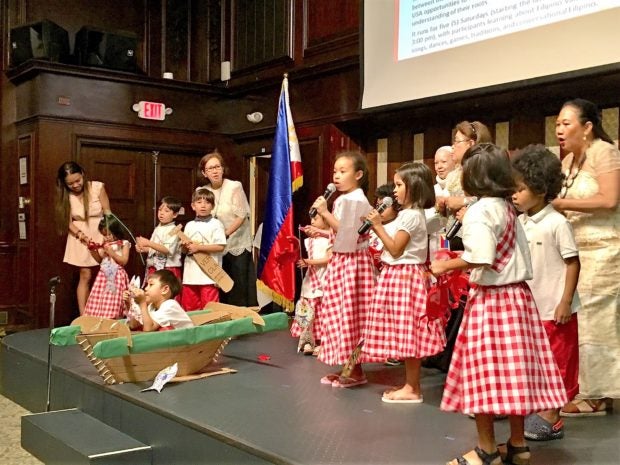 Highlights of the summer school included conversational Tagalog, having each child read and pronounce the words in Tagalog. They were taught native dances such as a version of “Pandango sa Ilaw” with battery-lighted candles balancing on their heads, “Subli” and a fun crab dance, “Inalimango” choreographed by Catalino Arca.

Surprisingly, the children were able to sing Visayan medleys against a backdrop of island fishing. The mothers who accompanied their children for five Saturdays also had their own line dance presentation. That kept them busy while waiting for their children. The camaraderie and networking among different families were good enough reasons to attend the program.

Deputy Consul General Kerwin Orville Tate opened the first Saturday session to welcome the children and their parents. He remarked, “You’ve started your children on a wonderful journey, a realization of who they are and where they came from. As Jose Rizal often said, ang hindi marunong lumingon sa pinanggalingan ay hindi makakarating sa paroroonan. In English, anyone who doesn’t know where they came from will not reach their destination.”

Proud to be a Filipino in the United States, these children have quickly grasped the essence of what the Philippines is all about in songs, games, folk dances, culinary delights and most importantly, the Philippine language and history. So, the next time they are asked, “Where are you from?” These kids can very well converse about the Philippines.