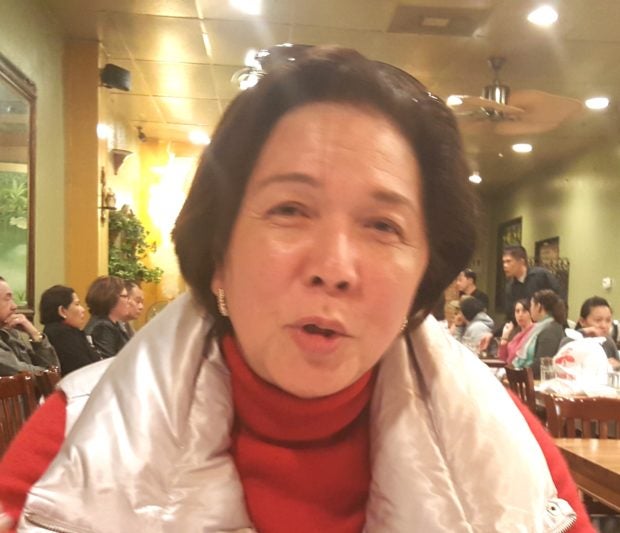 SAN FRANCISCO – A visiting civil society figure said that Philippine President Rodrigo Duterte let himself to be upstaged by the last-minute dramatic change in the leadership of the House of Representatives and was not his usual self when he delivered his 3rd State of the Nation Address (SONA).

Vicky Garchitorena, a stalwart of the Alliance of Women for Action Towards Reform (AWARE) and core leader of the opposition coalition Tindig Pilipinas, observed that President Duterte “was not himself and very subdued, contented with just reading the prompters, did not curse or go off script as he usually does and that the SONA itself was very short, “which was very unusual.”

“We got news that he saw his doctor in Cardinal Santos the day before the SONA. The conjectures are that he might have been apprised of serious health issues,” Garchitorena told INQUIRER.net during her recent visit to the San Francisco Bay Area.

“This may also be the reason why presidential daughter Davao City Mayor Sara Duterte-Carpio took up the cudgels and manipulated the Congress to install former president and incumbent Pampanga Congresswoman Gloria Macapagal-Arroyo (GMA) as Speaker. I also believe GMA has always been the brains behind Duterte on political issues.”

Garchitorena, the former head of Arroyo’s Presidential Management Staff, also sensed a rift in the Duterte coalition because it is widely believed that Duterte wanted Alvarez to stay as Speaker as he was his man.

“GMA is too strong for him. He may not have known about the coup, which Sara participated in or led, together with Ilocos Norte Governor Imee Marcos. Besides, President Duterte’s PDP Laban party seems to be breaking up as well. Former Senate President Aquilino Koko Pimentel III was against the party’s general assembly held recently.

“Also, coalition partner Senator Grace Poe is against GMA. If indeed Duterte is very sick, as he has not been seen frequently, it may be the reason they will try to ram through the Charter Change and federalism,” Garchitorena surmised.

The Liberal Party (LP) may have been kept in the dark during the change in House leadership, but Garchitorena avers that the opposition is gaining ground and many young people are being attracted to LP, Akbayan, and Magdalo parties “as they have always been working for democracy and justice.”

“Their leaders are very charismatic. Senator Leila de Lima has received an international award. Senator Antonio Trillanes IV has been very vocal against Duterte’s billions while Senator Risa Hontiveros has always supported women’s rights. Tindig Pilipinas is also gaining ground. Its hubs are all working overtime to spread their influence in the provinces and among all sectors — professionals, the youth, women, the poor,” Garchitorena claimed.

“We hope the 2019 elections can be a turning point. If Duterte cancels it, that can be their damnation,” she added.

On GMA’s return to a powerful position, Garchitorena assessed that her former boss is very vulnerable and will have a hard time consolidating power dogged as she is by corruption-related controversies like the Hello Garci tape on alleged 2004 presidential election rigging, $329-million National Broadband Network (NBN) deal with China’s ZTE Corp., and her alleged P500,000 gift to all congressmen/women and local officials as bribes in Malacañang, among others.

“Yes, GMA is one of the alleged corrupt officials that just-retired Ombudsman Conchita Carpio-Morales referred to as recycled officials accused of committing corruption. GMA was released as soon as Duterte won.”

Duterte, Garchitorena said, “is one of the worst presidents we have had. Our economy is tanking. Foreign investments are down 90%. The peso is falling in relation to the dollar. TRAIN is dragging down the most vulnerable of our people. Many people are already disgruntled.”

“The eccentricity of Duterte and his propensity for killing are no help. The drug lords are not being held accountable. The corrupt are just reassigned to other government posts.”

Still, Garchitorena is hopeful because the youth are now becoming more discerning of who are trustworthy among those who purport to lead the nation, despite the return to power of politicians associated with plunder.

It will be recalled that President Joseph Estrada was ousted by the so-called EDSA People Power 3 for alleged plunder but is the current Mayor of Manila. GMA, successor of Estrada, was also accused of plunder and for a long tim, under house arrest, is now the new House Speaker. Even the immediate family members of President Ferdinand Marcos, Rep. Imelda, former Sen. Ferdinand Bongbong Marcos Jr. and Governor Imee are riding high, with Marcos himself now buried in the Libingan ng mga Bayani, which is believed to be Duterte’s way of paying off his political debts.

“It is good that the youth understand that there are a lot of problems happening in our country and are speaking out. It is also good for the Fil-Ams here to be aware of what’s happening in their Motherland, even if they are not in the country and are therefore not directly affected day-to-day. We really have to reach out to the younger generation, for them to understand that they should be a part of strengthening democracy and resisting the authoritarian impulses of our leaders,” Garchitorena underscored.