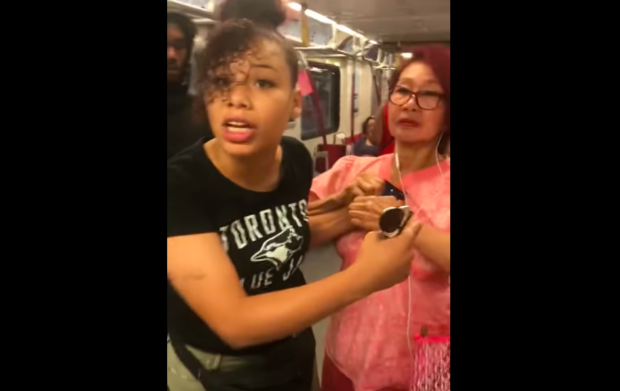 A Filipino-Canadian was robbed of her cellphone in a struggle with a 19-year-old who made racist comments while on a subway train in Toronto on July 28.

“I’m on the TTC (Toronto Transit Commission) heading southbound on line 1, this young [woman] was yelling at a commuter to go back to China,” wrote one netizen, Margaret Anthony, in a YouTube video she uploaded on July 29. “I pulled the emergency alarm, confronted the culprit mugging this [woman] and waited for the police to arrive. This is unacceptable!”

Marilyn Quijencio was listening to music while riding the train when a young woman and a man approached her and another Filipino-Canadian coworker, as reported by CTV News last Wednesday, Aug. 1. The two Filipino-Canadians were on their way to work at a nursing home.

The young woman and man asked Quijencio’s coworker for a cigarette and money. Quijencio asked them to leave. “I said, ‘Go and find work so that you have money.’ That’s what I said.”

Because the two Filipino-Canadians turned them down, the young woman confronted her and told her, “You f*** immigrant, go back to China.”

While Quijencio raised her phone to her face to change the music, the woman grabbed her cellphone and ran to the other side of the car.  Quijencio believes the young woman thought she was filming her.

Anthony had been on the other side of the train and managed to take a video of the confrontation. Quijencio ran to get her cellphone back and the two struggled over the gadget. Anthony told the young woman to “stop assaulting” Quijencio. The suspect said, “I just want her to delete the video.”

The video uploader threatened to call the police on the young woman. However, the suspect escaped as soon as the train doors opened at Eglinton West Station. Quijencio followed the young woman but was unable to catch her.

Toronto police stated that the suspect, Tashia James, surrendered on Aug. 1, the report said. Since James and the man were unable to unlock Quijencio’s phone, they decided to dispose of the phone.

James was charged with robbery and failure to comply with probation. She was released to her family on the same day she surrendered on a CA$1,000 (around P40,700) bond and was “laughing and smiling,” according to the CTV report. James’ next court date is scheduled on Sept. 14.

“She has to learn from her mistake,” Quijencio noted. “She should take a look at herself and where she comes from. She’s not a pure Canadian. She’s also an immigrant like me.” Kate Matriano/NVG