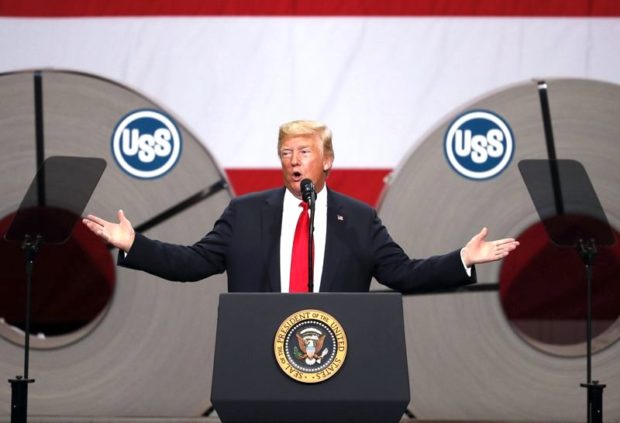 Speaking at events Thursday in Iowa and Illinois, Trump claimed victory in advance of Friday’s government release of quarterly gross domestic product data, saying “nobody thought we were going to be this good” and that when he became president, “those numbers were bad.”

In fact, the skepticism from economists has centered more on whether strong GDP growth would be sustainable after a few quarters. That question has yet to be answered; it’s not unusual for the economy to surge forward temporarily.

Trump also falsely repeated a claim that the U.S. economy is the best “we’ve ever had” and incorrectly asserted that Canada’s trade market is “totally closed.”

A look at the claims:

TRUMP:“We’re having the best economy we’ve ever had in the history of our country.” — remarks in Granite City, Illinois.

THE FACTS:Even allowing for some Trumpian exaggeration, this overstates things.

The unemployment rate is near a 40-year low and growth is solid, but by many measures the current economy trails other periods in U.S. history. Average hourly pay, before adjusting for inflation, is rising at about a 2.5 percent annual rate, below the 4 percent level reached in the late 1990s when the unemployment rate was as low as it is now.

Pay was growing even faster in the late 1960s, when the jobless rate remained below 4 percent for nearly four years. And economic growth topped 4 percent for three full years from 1998 through 2000, an annual rate it hasn’t touched since.

TRUMP, on GDP figures:“On Friday, numbers come out and I don’t know what they are, but there are predictions from 3.8 to 5.3. … Nobody thought we were going to be this good. … When I took over those numbers were bad, and they were heading in the wrong direction, because of regulation. Really the taxes were too high … jobs were, forget it.” — remarks at workforce event in Peosta, Iowa.

THE FACTS: Economists do expect a strong number for growth in the April-June quarter, but it is likely to be a temporary bounce. And the U.S. economy wasn’t doing nearly as bad before Trump took office as he suggests.

Few economists doubted that growth could accelerate after the Trump administration’s tax cuts were passed last year, and Congress approved a big increase in government spending earlier this year.

But the skepticism Trump describes centers on whether the second quarter’s outsize growth can be sustained. The economy faces two significant structural drags: an aging population, which means fewer people are working and more are retired, and weak productivity growth, which means that those who are working aren’t increasing their output as quickly as in the past.

Trump’s tax cuts can stimulate faster growth by putting more money in people’s pockets, but most economists expect the effect will be temporary, as those two trends act like gravity and pull the economy’s longer-term growth lower.

When the Commerce Department releases the growth figures for the April-June quarter Friday morning, economists forecast they will show the economy expanded at a 4.1 percent annual rate, according to data provider FactSet. Some analysts have said the figure could reach as high as 5 percent.

Americans have ramped up their spending after cutting back in the first three months of the year, encouraged by tax cuts that have left more money in their pockets. Yet the tax cuts provide a one-time lift to take-home pay and will likely have less impact next year, analysts say.

A large, temporary surge in agricultural exports, specifically soybeans, should also juice growth in the second quarter. Exports of U.S. soybeans soared as companies sought to ship them to China before that country slapped tariffs on them in retaliation for U.S. tariffs on Chinese goods. Daniel Silver, an economist at JPMorgan Chase, forecast that soybean exports alone likely boosted GDP by 0.5 percentage point in the second quarter.

Many economists forecast growth will drop back to roughly 2.5 percent to 3 percent in the third quarter.

For the year, the economy is likely to expand at a 3 percent pace or more for the first time since 2005. But most economists forecast it will fall back below 3 percent soon afterward.

It’s not unusual for the economy to surge forward temporarily. Growth reached 5.2 percent in the third quarter of 2014, before falling back to 2 percent in the next quarter.

Growth also wasn’t as bad when he took office as Trump claims. The economy expanded 2.9 percent in 2015, though it slowed the following year. Businesses added 2.3 million jobs in 2016, before Trump took office, more than the 2.2 million gained in 2017.

TRUMP:“The Canadians you have a totally closed market … they have a 375 percent tax on dairy products, other than that it’s wonderful to deal. And we have a very big deficit with Canada, a trade deficit.” — remarks in Peosta, Iowa.

THE FACTS:No, it’s not totally closed. Because of the North American Free Trade Agreement, Canada’s market is almost totally open to the United States. Each country has a few products that are still largely protected, such as dairy in Canada and sugar in the United States.

Trump also repeated his claim that the U.S. has a trade deficit with Canada, but that is true only in goods. When services are included, such as insurance, tourism, and engineering, the U.S. had a $2.8 billion surplus with Canada last year.