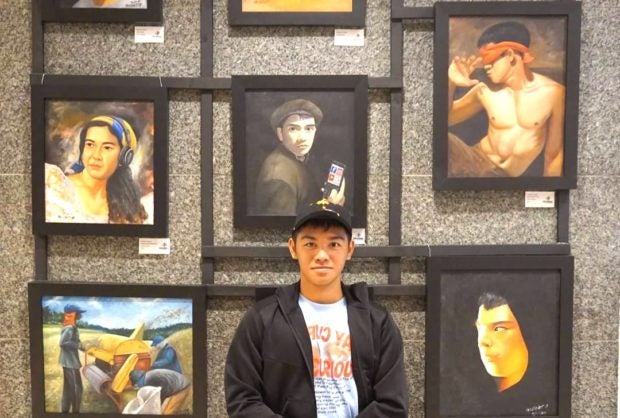 RED DEER, Alberta – A young Filipino artist’s paintings are serving as lenses for Canadians who would like to take a peek at his world across the globe.

At 21, Rommel Tingzon’s artworks have reached the local art scene in Edmonton City, thanks to Canadian curator Gordon Snyder. The exhibit on the main floor of Manulife Place where passersby see the art works in downtown Edmonton, began in June and will end in August.

“At first I thought the exhibition would attract the interest of Filipino Canadians, which it did for subject and social commentary, but people of many ages and cultures were bound emotionally to his subjects of poverty, hard work and the realities of war,” said Snyder.

Tingzon, eldest of eight children, was born in Western Samar to a poor family. He has worked in the rice fields and harvested coconuts to help his family.

“I have been drawing since I was a child,” said Tingzon in a statement. The drawings at such a young age blossomed into cartoons, anime and later on, joining in competitions in school through posters, collages, and editorial cartoons.

In high school, he began doing charcoal portraits. When he moved to Palawan in 2015, he started painting in oils after receiving commission from a local lawyer. It was during this time that Tingzon dug deeper into his art by looking at historical art works by Filipino artists and artists abroad.

Tingzon has been mainly a self-taught artist, having no formal training. Snyder, who partly lives in the Philippines, noted that social media and cellphones provide access, albeit limited, to arts and culture for Filipinos in their country.

In a statement about the exhibition, Snyder said, “They see the rest of the world past the poverty and have to struggle to attain what others so easily have.”

“We in Canada have it easy — so many young, talented Filipinos whose lives can go nowhere because of social issues,” he added.

Snyder and Tingzon met in Puerto Princesa, Palawan in 2017. After a number of visits to the former’s studio, the two decided to collaborate and produce an exhibition of his paintings, “to illustrate how his realist images mirror his culture and its history,” said Snyder. 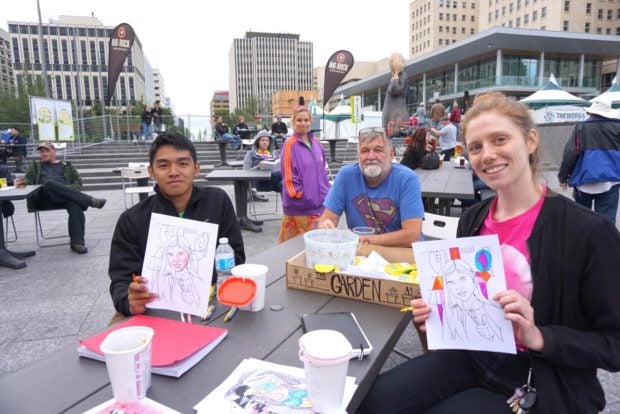 Tingzon and curator Gordon Snyder at the exhibition. GORDON SNYDER

“Definitely the art works reflect the plight on the common Filipino. His art speaks to poverty and children playing simply with little or no toys; a soldier returning from Marawi to hold his son in Lagawe, Ifugao; working in the rice fields and carrying sacks of rice,” he said.

Tingzon describes his method as “realism in a classical sense.” He identifies his influences including Fernando Amorsolo and Juan Luna — two of Philippines’ renowned artists.

“My goal is to explore my culture, art, history, and my community through my art and share this with others,” he said. Besides showing the day-to-day life in the Philippines, his paintings also touch on how new technology affects the traditional culture of Filipinos.

“Tingzon’s paintings represent the learning process of a young emerging Filipino artist stepping from a remote island in the Philippines into the rapid and extreme cultural changes brought on by increased tourism and the paradigm shift from living in a specific culture to a global one,” said Snyder.

The exhibition has proved to Tingzon that his work has become “extraordinary” despite his being an ordinary, emerging painter.

“The first thing that ran through my mind when I heard that my paintings are going to be shown abroad was excitement, because of the opportunity to show my art work in another country and be part of an international festival,” said Tingzon.

The young artist is proud that his art portfolio, entitled Portraits of the Philippines, became part of The Works Arts and Design Festival. The free event in Edmonton City now in its 33rdyear attracts artists from around the world.

“For me, this experience was a big blessing. I know that it is hard for an artist to get a chance to have their work shown in other parts of the world,” he said.

“I was able to prove to myself that an ordinary person from a poor family in the Philippines could travel the world and have their work seen by others if they put their hard work and determination into it,” he added.

“This exhibition speaks to this artist’s visual reinterpretations of his world. The realities of being here and now, your birth circumstance and how you grew up are suddenly expanded by the internet and the cell phone,” noted Snyder.

Two of his paintings, one entitled Woman with Headphones showing a Filipina dressed in the traditional attire wearing headphones and a modern take on rice harvest, Harvesting Rice Today, were inspired by Amorsolo.

Tingzon also draws inspiration from Arturo Luz, a Philippine National Artists for visual arts who was a founding member of the neorealist school of art there. He incorporated lyrical images by Luz in his painting Boy on a Couch. 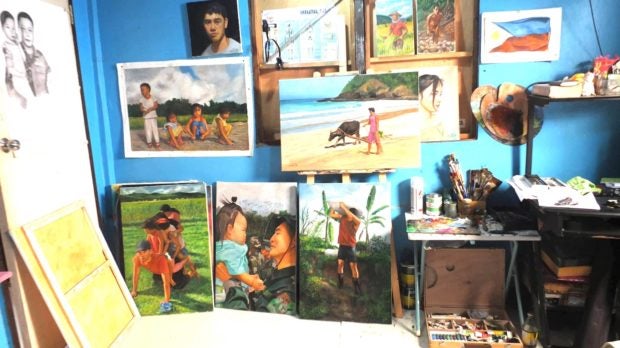 According to Snyder, a more contemporary influence on Tingzon’s art is the Cuban-American artist Cesar Santos. Tingzon admires Santos’ classical and modern art work imbued with influences from the Renaissance to the masters of the 19thcentury to the contemporary.

A self-portrait showing Tingzon in a Dutch garb and holding a cellphone, entitled Social Media reflects this influence.

Meanwhile, Tingzon’s symbolic paintings includeShow Me the Truth,another self-portrait with him wearing a blindfold, while a piece with a young man lying amid liquor, entitled Freedom of the Youthspeaks to the substance use issues among Filipino youth.

How he sees everyday life around him is also evident in his paintings. Laro ng Kahapon (Games of Yesterday),Sakay-sakayan (Ride Ride), Threshing Rice and Farmer on Sunrise Mountain evoke emotions and memories.

Another piece, Home from the War, shows a father returning from the war in Marawi City, southern Philippines, greeting his son.

“That is what led me to curate a show for Rommel Tingzon — he was finishing high school in Puerto Princesa with a high average (91%) and an American artist suggested I go to his home and see his paintings. I was astounded to find the small room full of rolled up paintings, all recent,” Snyder said.

“I immediately recognized his talent and decided I wanted to help him study art and perhaps someday himself become a National Artist of the Philippines like his heroes Juan Luna and Amorsolo,” he added.

Snyder’s help made it possible for Tingzon to enrol at the Far Eastern University in Manila in Studio Arts, beginning his schooling this August. “He is hardworking and fearless at 21 years of age and deserves this opportunity,” said Snyder.

The Canadian curator from Alberta has put up many exhibitions for The Works in the past. Living part time in the Philippines allows him to study the art market and history of the Philippines and Asia.

For Tingzon the possibilities are endless. “Who knows where the journey of my life and my art will take me. My life as an artist is just beginning and my vision is still evolving,” he said.

“I will pursue to create more art work that can tell people about my experience in life,” he added.