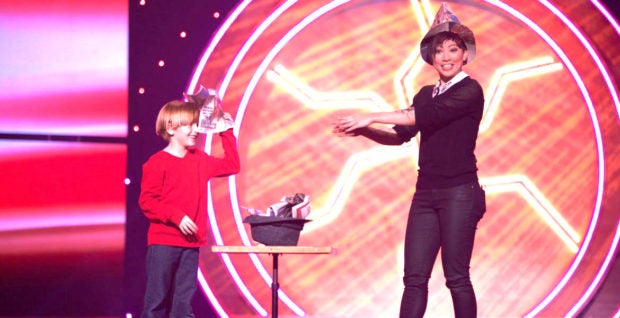 Since starting her career in magic, Kidd has performed at numerous events and venues around the world including Hollywood’s famous Magic Castle.

Among her many feature appearances and performances, Kidd has also hosted television shows such as “Break Magic” (also known as “The Magic of Science”) on the Discovery Channel, and competed on the Syfy channels’ “Wizard Wars” show in the U.S.

She was also featured on ITV’s show “The Next Great Magician,” on BBC’s “Now You See It,” and was cast as a full-time Wizard on season two of legendary magic duo Penn & Teller’s show after receiving a standing ovation from the two.

But becoming a magician wasn’t something Kidd grew up wanting to do and was in fact something that caught her attention much later in life.

Making of a magician

“Magic wasn’t even on my radar whatsoever,” Kidd told the Asian Journal,adding that she was never one of those kids who had their own magic kit to play with.

Born in Canada, Kidd has gotten away with being an actress since she was just 11 years old, something she’s called magic in itself.  The life of being able to miss periods of school, playing around, and getting paid for it made what she described as the “best life ever.”

But her introduction to magic came much later at a music festival where she saw a street magician from Australia doing a classic cups and balls trick in which balls appear and disappear under the cups at random.

“That moment completely changed me,” said Kidd who is now based in London where she runs the Krowd Keepers Magic Theatre nearby, and conducts a nose-flute ensemble on the side.

Going up to the magician for advice, she was instead given a list of books to get.

“I literally went straight to the first secondhand shop that I could find, and there was the book he told me about,” said Kidd, saying that she saw it as a sign.

Years later, books are still her go to source for magic, especially when it comes to crafting new tricks.

“There are probably more books written about magic than probably any other subject in the world, believe it or not,” said Kidd.

She pointed out that magicians have been around for a really long time, with many of their tricks hidden in some of the thousands of available books. 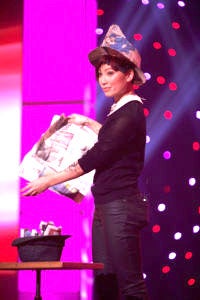 For example, a lot of the tricks magicians often do are re-adapted classic routines made more contemporary in presentation, she added.  She likened it to the relationship of a playwright and an actor.

“You can learn all of these old tricks that someone else came up with,” said Kidd.  “They’re so strong that they still work up to this day.”

She added, “It’s a constant creative process, but luckily as a magician, we have so much history that we can pull from.”

On being a Filipina and female magician

In the world of magic that has been and continues to be predominantly dominated by male magicians such as Dai Vernon, Harry Houdini, David Copperfield, David Blaine, and Criss Angel among others, Kidd said the lack of female magicians wasn’t something that automatically stood out to her when she started.

“I guess there’s pressure to kind of prove yourself in a way and be good, but I didn’t really mingle too much in that area because for me it was like, this is what I love to do and if I’m good enough, I’ll get work,” said Kidd.

But because the industry has been male dominated for so many years, there are some unavoidable differences she’s noticed along the way.

“I think the biggest challenge of being a female magician is the fact that because it’s mostly male dominated, many tricks were designed for men initially because of how society works and how things have been in the world,” said Kidd.

That, and the lack of pocket space in female clothing, she added while laughing.

To Kidd, interest in magic has always been more connected to personality.

Nonetheless, Kidd believes there’s an opportunity for everyone to get into magic, especially because of television and the internet.

Referring to the numerous magic shows that have been screened in the past years, she said magic may seem a little bit cooler than it was before.

“Just a little bit, but not too much,” she joked.

As to being a Filipina magician, she said there too was an opportunity for Filipinos to get into magic despite it not yet being a big part of the pop-culture scene.

Kidd went to Manila back when she launched her Discovery Channel show, “That Magic of Science.”

While there, the half-Filipina magician said she got to visit a local magic club and got to know a community of Filipino magicians.

On the fifth season of “Master of Illusion,” Kidd said viewers can expect her to show a different side of her work — playing more with atmosphere and suspense instead of comedy.

The show, hosted by Dean Cain, features 42 of the world’s greatest magicians including sixteen new magicians bringing a good variety to the acts.  It airs every Friday nationwide on the CW at 8:00 p.m./7:00 p.m. Central.

“If you’ve never seen magic before, it’s a great show to watch because it’s for the whole family,” said Kidd.

Of why she loves being a magician, Kidd pointed to two reasons.  The first being the feeling she gets when seeing people in awe and wonder from watching a trick, and the second being the freedom that comes with the job.

“I just love the freedom of it,” said Kidd.  “I get to travel all around the world with a deck of cards in my hand and nothing is more liberating than that for me.”