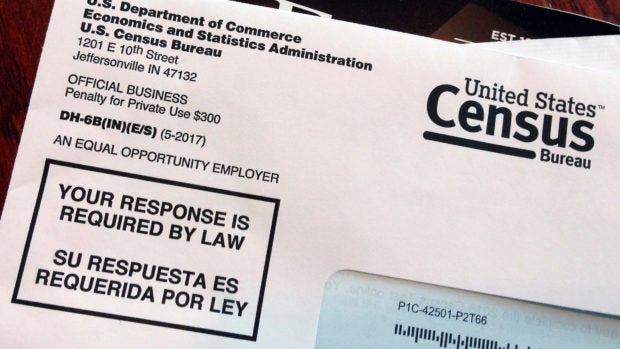 An envelope contains a test questionnaire for the 2020 census mailed to a resident in Providence, R.I., as part of the nation’s only test run of the upcoming national headcount. A Trump administration plan to include a citizenship question on the 2020 census has prompted legal challenges from many Democratic-led states. AP PHOTO

LOS ANGELES — The decision to ask people about their immigration status on the 2020 U.S. Census was politically motivated and designed to hamper participation from people of color, charged advocates of an accurate and comprehensive count.

A coalition of civil rights activists is urging people to register their concerns with the U.S. Census Bureau before the end of the official public comment period regarding the recent change to the 2020 questionnaire.

Those who would decline to take part in the decennial census because of the citizenship question or believe their communities would be affected by a potential undercount, as well as those who support the inclusion of the question, have until August 7 to submit public comments to the government.

U.S. Commerce Secretary Wilbur Ross in late March announced the approval of a Department of Justice request to include the question on the upcoming census. Proponents of the change say it is needed to enforce the Voting Rights Act. However, opponents say that information about individuals’ citizenship status has never been useful in advancing or protecting people’s civil or voting rights.

“We know the real motivation behind this decision,” said the Executive Director of The Leadership Conference Education Fund (LCEF) Vanita Gupta, during a teleconference on Tuesday, July 17. “Extremists like former White House aide Steve Bannon and Kansas Secretary of State Kris Kobach urged the administration to include the immigration question to further their anti-immigrant agenda.”

Gupta bases that conclusion on over 1,300 pages of internal emails and memos released by the Commerce Department on June 8 as a result of lawsuits filed to prevent the addition of the citizenship question to the upcoming census. Those documents also include warnings against the change from researchers within the department.

In a memo to Secretary Ross dated January 19, the Census Bureau’s Chief Scientist, John Abowd, wrote that reinstating the citizenship question would be “very costly, harms the quality of the census count, and would use substantially less accurate citizenship status data than are available.”

Abowd suggested that the Bureau gain participant’s citizenship information from existing administrative records as an alternative to spending an estimated $27.5 million dollars on additional door-to-door visits and follow-ups that may be needed to encourage non-citizen households to participate.

Those additional costs would compound funding issues that have hindered efforts to prepare for the 2020 census. Due to budget constraints, The Census Bureau plans on cutting the number of field offices and temporary census takers in half, compared to 2010, according to LECF Census Policy Advisorand former Staff Director for the House Census and Population Subcommittee, Terri Ann Lowenthal.

She said that if more money were not set aside for the census in the 2019 fiscal year, the Bureau would be $900 million short of what it needs to conduct adequate outreach and field enumeration. Experts say that would lead to an undercount that would disproportionately impact disadvantaged communities.

Census data is critical in deciding how $800 billion in federal funds get distributed. That information is also central to the redistricting process which outlines how officials are elected and constituents are represented.

A dramatic undercount of immigrants would have far reaching consequences for Asian Americans, 25% of whom arrived in the U.S. within the last 7 years, according to President and Executive Director of the nonprofit, Asian Americans Advancing Justice (AAAJ), John Yang.

“We recognize that our community is concerned,” said Yang during Tuesday’s teleconference. “Now is our opportunity to make our concerns heard.”