Denali, a mountain once named after McKinley who 'spoke to God'

Denali, a mountain once named after McKinley who ‘spoke to God’ 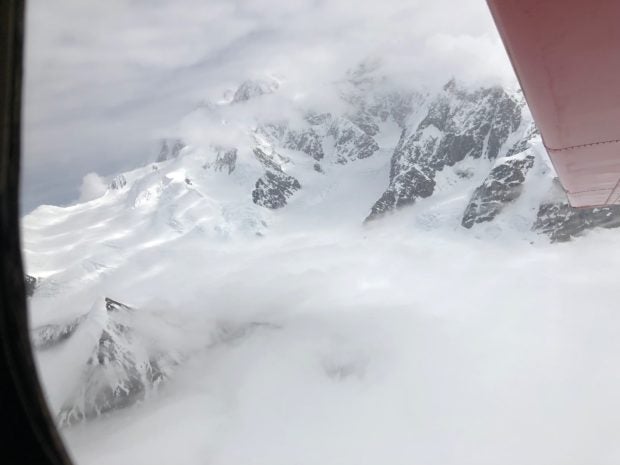 Mt. Denali as seen from an airplane. INQUIRER/Boying Pimentel

The mountain was once named after the American president who claimed God spoke to him in a dream and told him to colonize the Philippines.

It’s now known by the name it’s been called for hundreds, perhaps thousands, of years: Denali. It was renamed Mount McKinley in early 20th century to boost the presidential candidacy of William McKinley who never visited Alaska and who played a key role in turning the Philippines into an American colony.

In fact, he said God told him to do it.

Amid raging debates at the dawn of the 20th century on whether the US should claim the Philippines, on whether it is right for a nation that prides itself on being the land of the free to be colonizing other nations, McKinley said the answer came to him while praying in the White House.

“One night late it came to me this way—I don’t know how it was, but it came: that we could not leave them to themselves—they were unfit for self-government—and they would soon have anarchy and misrule over there worse than Spain’s was; and that there was nothing left for us to do but to take them all, and to educate the Filipinos, and uplift and civilize and Christianize them.”

And so it was that the Philippines, then the most predominantly Christian nation in Asia, was “Christianized” by the United States. The “Christianization” process was completed after a long war in which US forces used un-Christian-like tactics (like water cure, now known as waterboarding.)

In any case, native Alaskan stopped calling the mountain, the highest peak in North America, McKinley in the 1970s when the old name Denali was restored. It was only in the last few years that the name McKinley was finally dropped. In 2015 the longtime proposal by Alaskans to restore its original name was finally endorsed by the president of the United States, Barack Obama. (Donald Trump had tweeted in August 2015 that he plans to change it back, but Alaska’s senators have discouraged him from doing so, according to a CNN report last year.)

In June, my sons and I finally got to meet “the high one” or “the great one,” which is what Denali means in Koyukon, a native Alaskan language.

Our first view was underwhelming. We drove four hours from Anchorage to the Denali State Park. It was a long scenic journey north of Alaska’s most famous city. It was also a pleasant, uneventful drive, although I was warned to always remain alert — Moose frequently crossed the freeway, and it was not uncommon for travelers to hit them.

Denali Park is huge, covering more than 9,000 square miles. You can only drive in parts of the park. The best way to see it was by bus, preferably a tour bus that would take you to the remotest parts of the park. But that trip usually takes 8 hours or longer, time we didn’t have. So we took the regular park shuttle instead.

Shuttle drivers know the spots to get a view of Denali. But even on the best stops, we were simply too far away to appreciate “the great one.” The best view was still more than 70 miles away, and Denali was nothing but a tiny, if picturesque, snow-capped mountain range.

Our special trip to Denali was turning into a big disappointment.

That’s when we turned to another way to meet Denali.

The next leg of our trip was short. But the 60-minute flight to Denali became the highlight our entire journey.

Earlier in the week, we had taken a cruise in Aialik Bay in the Kenai Fjords National Park, near Seward. The ship took us right in front of the Aialik Glacier. The massive body of ice is thousands of years old. It took about 400 years to  travel about five miles according to the captain of our ship.

For about a half hour, we just stood in front of it, taking pictures or just gazing at the glacier. There was a brief moment when we — around 30 visitors to Alaska — were all quiet, like we were inside a church or a temple.

That feeling returned, and was even more powerful, as our plane circled Denali and we came face to face, flying within just a few miles of the “great one.”

It was the most impressive natural wonder my sons and I had ever encountered.  The snowcapped peaks stood majestically before us. It is known as one of the toughest peaks to climb. It takes 21 days to climb to the summit. On one side of the mountain range, we saw the red, blue, and yellow tents of one party that was in the process of scaling Denali. As we circled the range, we saw mostly rocks and snow and occasional pools of blue.

Up there, face to face with the “great one,” we finally met Denali. It was mesmerizing.