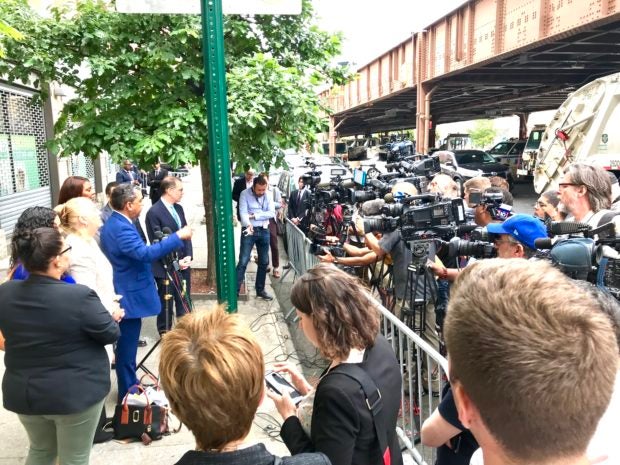 NEW YORK—As more than 200 immigrant children separated from their parents were moved to a foster care facility in New York City, President Donald Trump continued to draw condemnation from Democratic and GOP officials alike for what has been described as his “cruel, inhumane and very un-American” zero tolerance policy.

Despite its suspension since June 20, critics say Trump’s executive order “does nothing to fix the chaos or the humanitarian crisis at the border that Trump created.”

On Friday, June 22, following confirmed reports that immigrant children separated from their families have been relocated to New York City, Rep. Adriano Espaillat (NY-13) led a delegation of local elected officials on a visit to the children, who are currently under the care of the Cayuga Home For Children. During the closed-press meeting, Espaillat and his delegation discussed wellness concerns with Edward Hayes, president and CEO of Cayuga Home For Children.

Each of the more than 200 children will be transferred to a foster family so they don’t have to live in the shelter, Espaillat later revealed at a press conference.

New York City Public Advocate Letitia James, a local leader who attended the press conference, told INQUIRER.net that the 239 children were brought to New York because “we have a foster care infrastructure in place and we’re the largest in the nation.”

Asked how long the kids would stay with foster families, Espaillat said it could take 20 to 60 days before they could return to their families.

And what happens to the children if their parents are not found? 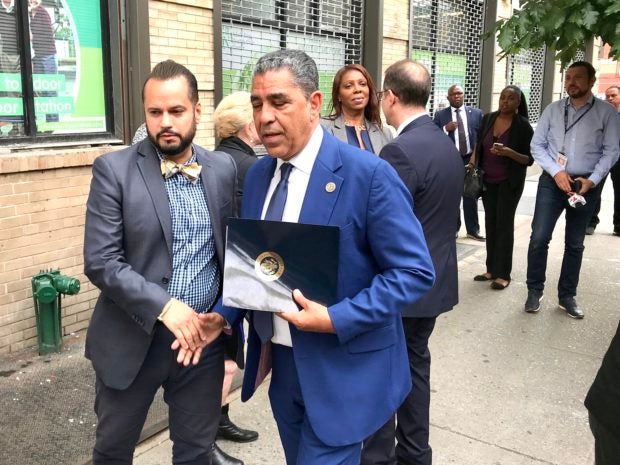 New York State Senator Jose Serrano (left) with Congressman Adriano Espaillat who is hopeful the “migrant children will be reunited with parents or loved ones in 20 days or less”. INQUIRER/Elton Lugay

“Well, it’s not necessarily the parents. Some of the parents are not even in the country. A cousin, a brother, a sister, an uncle—we’ll try our best to reunite them with a family member,” Espaillat replied.

Trump’s “zero tolerance” policy began in April this year. Before it was suspended, it allowed border patrol agents or any federal authority to separate children from their parents or adults who accompanied them in crossing the border, whether apprehended during an illegal crossing or legally presenting themselves for asylum.

Aurelia Torrejos, a Filipino Trump supporter, is now furious with the POTUS. “I admire him for his boldness and his commitment to peace, but I cannot simply agree with him on tearing families apart,” she told INQUIRER.net, making a reference to Trump’s historic meeting with North Korean leader Kim Jong-un.

A nurse to many American couples’ babies in Manhattan for four years now, Torrejos revealed that footages and audio of the separated children crying for their parents were heartbreaking and called to mind her own children back in the Philippines.

“Seeing these kids, some as young as 9-months-old, being taken from their mothers breaks my heart. I’m always worried sick about my kids who are thousands of miles away from me just because I’m here in the States working, taking care of other families’ children… So I know this feeling. I am a mother who’s longing to have my kids in my possession,” she said.

Opposing the separation of over 2,000 children from their parents, the National Federation of Filipino American Associations (NaFFAA) took the occasion to urge Congress to pass comprehensive immigration reform.

“On June 20, President Trump issued an executive order on immigration titled ‘Affording Congress an Opportunity to Address Family Separation.’ While the President’s executive order may be seen as a step in the right direction, NaFFAA urges the Administration to take all necessary and permanent steps to end the inhumane practice of separating parents from their children. Moreover, NaFFAA calls upon Congress and the Administration to support legislation that fairly and humanely reforms immigration in the long term, and to oppose legislation that dismantles family-based visas,” it said in a press statement.

“Like many of our Filipino family members, immigrants come to America to pursue opportunity, escape poverty, or reunite with their loved ones,” said Brendan Flores, NaFFAA national chairman. “We urge Congress to pass comprehensive immigration reform that creates a pathway to citizenship for DREAMers and protects the family-based immigration system.”

“Zero tolerance” is now better known as the family separation policy. More than 2,300 migrant “kids here in our country [are] separated from their parents and there is no plan to get them back together,” New York City Mayor Bill de Blasio pointed out in a recent interview

De Blasio was among 20 mayors from across the U.S. who was denied entry Friday at a detention facility in El Paso, Texas.

“I am frustrated because the federal government should not be keeping the media or public officials from seeing what’s happening to kids,” the mayor said. “With taxpayer dollars, in our name, right? You go down there and it’s basically a tent city, it’s not quite desert but it feels kind of like a desert out in the middle of nowhere, a tent city. And what do they have to hide that they won’t let in mayors or senators or Congress members or the media?”

Two things stood out for him about the incident. First, that the federal government was routinely denying access to the facilities. “That’s something everyone should be very concerned about in terms of democracy, in terms of transparency,” he said.

“But second, on, I hope, a more positive side, I gathered with a group of Republican and Democratic mayors who are absolutely united in revulsion at the policy of family separation, who are all demanding that the families be reunited. And who represent what I think is a growing desire in the grassroots of this country to see comprehensive immigration reform because the absence of a decent and coherent policy is causing this kind of inhumanity and maybe this crisis is actually drawing out something, you know, morally and humanly that could lead to some bigger answers here,” he added.

“This was a clear legal violation of the due process of the children and of their parents. In the United States of America, even non-citizens, undocumented people still have fundamental rights and one of them is due process and that’s been violated,” Governor Andrew Cuomo said in announcing the move.

Over the past two months, an average of 45 children had been taken from their parents per day. Although the Department of Health and Human Services (HHS) has placed the number of separated children at around 2,300, critics say the figure could be much higher.

The American Academy of Pediatrics (AAP), American College of Physicians and the American Psychiatric Association have condemned this forced separation, with AAP saying that the policy has caused “irreparable harm” to the children.

Despite the indefinite suspension of the “zero tolerance” policy, children who are already detained will not be immediately reunited with their families, according to the HHS.