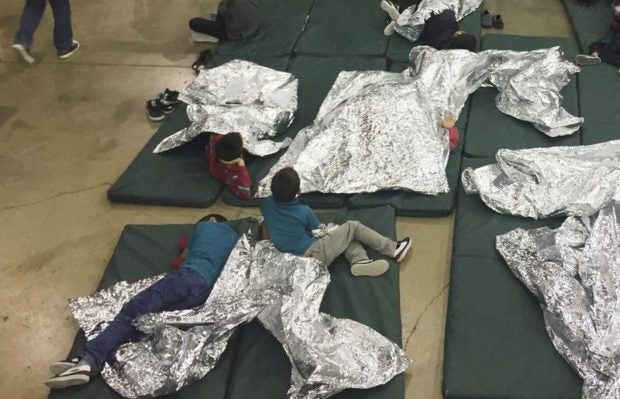 WASHINGTON— Thousands of children split from their families at the U.S. southern border are being held in government-run facilities. A look at how we got here, what’s real and what’s not, and what might happen next.

HOW DID WE GET HERE?

Tens of thousands of parents and children, mostly from Honduras, El Salvador and Guatemala, have been caught crossing the U.S.-Mexico border illegally in recent years with stories of fleeing drug cartels, extreme poverty and gang violence. The U.S. can’t send them back over the border unless they are Mexican citizens, and instead must refer their case to an immigration judge.

In 2008, President George W. Bush focused on the problem of minors crossing the border without their parents and signed a law unanimously passed by Congress that called for such “unaccompanied minors” to be released into the “least restrictive setting.”

By 2014, President Barack Obama was facing an influx of both children traveling alone and families as a result of violence in Central America. At one point, his administration tried housing the families in special detention centers. But after a federal judge in California ruled the arrangement violated a long-standing agreement barring kids from jail-like settings, even with their parents, the government began releasing families in to the U.S. pending notification of their next court date.

Fast forward to Trump, who campaigned on building a border wall, and Attorney General Jeff Sessions, who derided these longtime U.S. immigration practices as “catch and release.” Trump and Sessions insisted that people exploit the system, even traveling with children to ensure they aren’t jailed and slipping away before their court dates.

By this April, Sessions announced a plan: The U.S. would have “zero tolerance” for illegal crossings. If a person doesn’t arrive at an appropriate port of entry to claim asylum, the crossing is deemed illegal and prosecuted even if the person does not have a criminal history. With the adult detained and facing prosecution, any minors accompanying them are taken away.

Nielsen has muddied the debate by insisting that children will only be separated in narrow circumstances, including if the adult has broken the law. That falsely leaves the impression that only children traveling with gang members or other violent criminals will be separated. But under U.S. law, the act of crossing the border without proper documentation itself is a crime and would trigger a separation, unless a person can find a designated port of entry and claims asylum.

The result is that in the six weeks following Sessions’ announcement, nearly 2,000 minors were separated from adults at the border.

DID THE OBAMA ADMINISTRATION ALSO SEPARATE FAMILIES AT THE BORDER?

Nielsen said Monday that separating families at the border is “not new” and that it happened in the Bush and Obama administrations, albeit to a lesser degree.

Make that a much lesser degree. Gil Kerlikowske, the U.S. Customs and Border Protection commissioner from early 2014 to the end of Obama’s term, said parents were split from their children if they were arrested — maybe on a drug charge — or had an outstanding warrant. But, he writes, the number of separations was “minuscule” considering how many people were coming at the time.

Kerlikowske oversaw the border agency in the summer of 2014, when Central American families and children overwhelmed U.S. inspectors in greater numbers than today.

WHAT DO DEMOCRATS HAVE TO DO WITH IT?

Not much, except that they seem to be seizing on the issue to press Republicans to break from the president ahead of the midterm elections.

Trump has repeatedly said Democrats are to blame and cited a “horrible law” that separates families. But no law mandates that parents must be separated from their children at the border, and it’s not a policy Democrats have pushed or can change alone as the minority in Congress.

(That 2008 law signed by Bush dealt only with unaccompanied minors, not families.)

Perhaps a bigger obstacle is that Republicans, currently in control of Congress, have been deeply divided on immigration. Moderate Republicans have been trying to negotiate a plan that would reduce family separations and also open a door to citizenship for young immigrants brought to the U.S. as children and who stayed illegally.

But many hardline conservatives are leery of any legislation that would protect from deportation immigrants who arrived illegally, calling it “amnesty” and complicating the GOP’s ability to pass legislation in both the House and reach the needed 60 votes in the Senate.

Some Democrats have speculated that Trump is using the humanitarian crisis as leverage to negotiate a tougher immigration bill, an assertion the White House has rejected.

But White House spokesman Hogan Gidley said Monday that any crisis belongs to Democrats because they are the ones who rejected Trump’s initial immigration plan.

“It’s a dangerous situation for this country and it’s all on the backs of the Democrats,” he told Fox News.

WHAT’S THIS ABOUT THE BIBLE?

Last week, Sessions cited the Bible in defending the policy.

“I would cite you to the Apostle Paul and his clear and wise command in Romans 13, to obey the laws of the government because God has ordained them for the purpose of order,” he said.

White House press secretary Sarah Huckabee Sanders defended Sessions’ use of the Bible saying “it is biblical to enforce the law.”